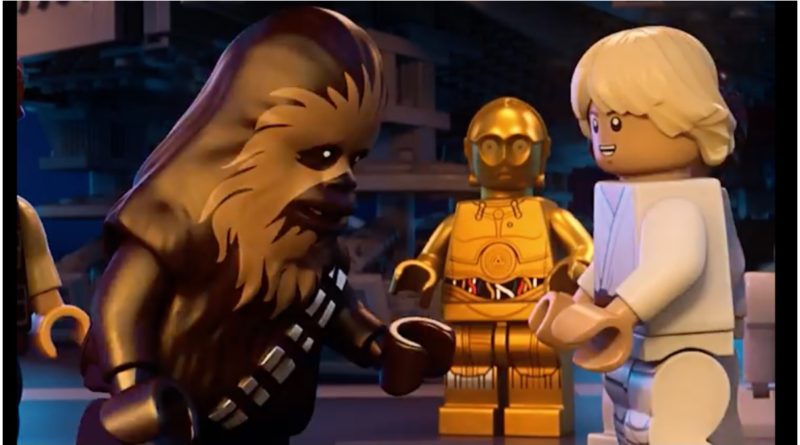 As the Star Wars Celebration event in Anaheim begins, the LEGO Group teases a short LEGO Star Wars film, dropping on May 27.

The Millennium Falcon lands outside a familiar looking cinema and the heroes of the rebellion leave their handprints – and footprints – in the concrete outside before heading into the foyer. In a 30-second teaser that has just appeared on the LEGO Group’s Facebook page, Luke Skywalker, Han Solo, Princess Leia, Chewbacca and everybody’s favourite droid double act land outside a theatre which looks a lot like a certain Palace Cinema to rapturous applause from the waiting crowds.

After leaving hand prints, footprints and – in a comedy reference to Han being frozen in Carbonite – faceprints in concrete, a la Grauman’s Chinese Theatre, they head inside, pausing only for Chewie to rescue the hapless C-3PO who has become stuck. It is, we learn, a trailer for ‘a new LEGO Star Wars short film’, coming on May 27.

It’s highly likely that the film is a tie in with the Star Wars Celebration Anaheim 2022 event taking place from May 26 to May 29 where the LEGO Group has a presence, with LEGO Star Wars merchandise and experiences available at its booth. Although given the date, it may reference the launch of the new Disney+ series, Obi-Wan Kenobi. You can read more about the Anaheim event here, which covers some of the content of the celebration, plus ways in which you can keep up with the news if you’re unable to attend in person.

It seems that there may be Star Wars Celebration LEGO VIP rewards available too, though whether they’ll be reserved for attendees or available more widely is uncertain. What we do know is that an item has appeared in the LEGO VIP Rewards area of LEGO.com, but the reward is locked, requiring users to complete the ‘Star Wars Celebration 2022 Redemption’ activity before it can be claimed. As to what it might be, we’ll bring you the news as we get it.

You can help Brick Fanatics to keep bringing you the greatest LEGO news in the galaxy by purchasing your LEGO via our affiliate links. Thank you.