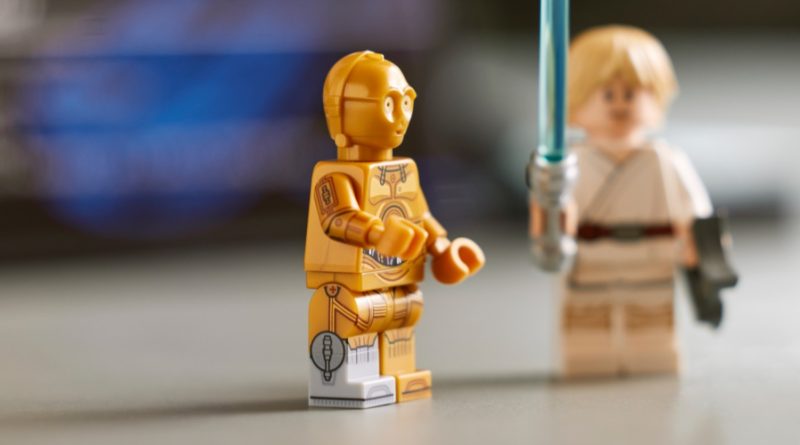 While Threepio’s basic design is one of the few to remain unchanged since the dawn of the LEGO Star Wars theme in 1999, the droid has received incremental updates over the decades. They’ve essentially all revolved around changes to his base colour or printing, though – and even while the LEGO Group perfected his head mould at the first time of asking, there’s one area begging to be improved with a new element.

That’s the lower half of C-3PO’s right leg, which for the duration of the original Star Wars trilogy was clad in silver plating, in stark contrast to the rest of his gold outer shell. When the LEGO Group began printing Threepio’s legs, this detail was communicated through a tiny strip of silver along his knee. And for a while, that was basically the limit of what was possible with the techniques the company had available to it.

Until the mid-2010s, that is, when the LEGO Group introduced dual-moulded legs for the first time. Since then, C-3PO has been crying out for a single dual-moulded leg to better represent his mismatched plating, but the LEGO Group has failed time and time again to seize that low-hanging fruit – even for this month’s 75339 Death Star Trash Compactor Diorama, which offers the most detailed version of the droid to date.

Bizarrely, the LEGO Star Wars team has saved its best version of Threepio for a set launching just five days later in 75341 Luke Skywalker’s Landspeeder, this year’s May the Fourth Ultimate Collector Series model. The 1,890-piece rendition of the X-34 Landspeeder, which has just been revealed by the LEGO Group, includes two minifigures – one of which will probably never be topped in the design department.

This set’s C-3PO is far and away the pinnacle of protocol droid design, applying every possible technique the LEGO Group has in its arsenal, including arm printing, side leg printing and dual-moulding. It all adds up to a minifigure that collectors will be scrambling over each other to get their hands on – the only downside being that it’s currently locked behind a £174.99 / $199.99 / €199.99 paywall.

Given the same minifigure hasn’t shown up in the much cheaper 75339 Death Star Trash Compactor Diorama, it feels unlikely that we’ll see this C-3PO outside of 75341 Luke Skywalker’s Landspeeder any time soon, so if you’re desperate to get your hands on it, best to swing for the UCS model when it launches on May 1 (for VIPs, or May 4 for everyone else).