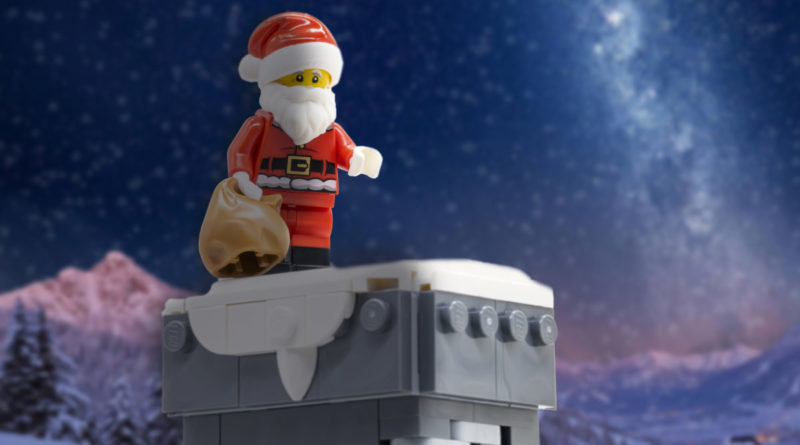 LEGO for Adults 10293 Santa’s Visit is a charming set bursting with so much festive cheer that it definitely deserves a place on Santa’s nice list.

LEGO and winter seem to go hand-in-hand – there’s just something so evocative about seeing quaint LEGO buildings covered in brick-built snow. The Winter Village Collection has been bringing a bit of festive spirit into our homes since the launch of the inaugural set, 10199 Winter Toy Shop, back in 2009.

Since then, we’ve been treated to snow-capped fire stations, post offices, a marketplace, gingerbread houses, and even Santa’s workshop, but we’ve never seen the big man going about his day job – or to be specific, his Christmas Eve job – in any of those sets.

10293 Santa’s Visit returns to a model more grounded in reality than the previous two (10267 Gingerbread House and 10275 Elf Club House), and on paper it’s the perfect set to capture the spirit of Christmas. Everything you’d expect from the season is here: a light-up Christmas tree (a first for the theme, and indeed across any LEGO set), a letter to Santa, cookies and milk by the fire, stockings hung up, and an excited family waiting for Father Christmas to deliver their presents.

While there are a few similarities that can be drawn between this and 2012’s 10299 Winter Village Cottage, LEGO fan-turned-designer Chris McVeigh has created a model that has a very distinctive look, thanks in part to those beautiful sloped roofs. But is this set naughty or nice?

Inside 10293 Santa’s Visit‘s box are nine numbered bags that contain the 1,445 pieces needed to complete the large family house, the impressive Christmas tree and the small fence and mailbox. Continuing the Winter Village trend of encouraging friends and family to build together, there are two instruction manuals – the smaller concentrates on the small side build and tree, whereas the larger manual focuses its attention on the house. A very small sticker sheet is also included.

The build begins by constructing the front gate to the property, and the all-important mailbox for sending that letter to Father Christmas. Snow piles are created using 1×4 double curves with 1×4 tiles, and 1×1 curved slopes are used to represent snow covering the tops of the fence panels. Toss in the brick-built mailbox and lantern, and it’s a lovely little build to set the scene – and also does a great job of getting you in a festive mood.

And even if not, you’ll surely be full of cheer by the time you’ve finished the Christmas tree. If you still don’t feel like getting into the Christmas spirit after that, then presumably you are actually the Grinch himself, and should probably stop reading this review now. It’s only going to get jollier from here on in.

The tree itself is actually a more involved build than it might look – it’s fairly sizeable and feels quite hefty to hold, and unlike other LEGO Christmas trees, this one lights up. A light brick is hidden within the trunk and trans-clear bricks are used to build up the inner core. When the tree is pressed down the interior lights up creating a really lovely, twinkling tree effect. Of course, no Christmas tree would be complete without presents and there’s a collection of five to be built and placed under the tree, the best of these being the brick-built trumpet.

The two side builds are fun to put together, but the main house is just a joy. It’s a split level design with a kitchen, dining area and sitting room downstairs, with the little girl’s bedroom being the only room upstairs, accessed by a small ladder. The build feels like it utilises every different type of connection going: traditional stud-to-stud, Technic pins connected to Technic bars and bricks, studs-not-on-top techniques, bars slotted into holes, hinges and brackets. All of these are used at least once somewhere in the build, which makes for a really interesting and enjoyable experience that never gets repetitive or boring.

All throughout the interior are wonderful little touches that really help to bring the whole model to life, as well as doing an incredible job of creating the sense of a family home at Christmas, with all the festive paraphernalia you’d expect to find. There are stockings hung up by the fire, a traditional poinsettia plant, presents hidden around the house, cookies and milk put out for Santa (the cookies are based on designer Chris McVeigh’s mother’s secret recipe that she calls ‘melting moments’), and upstairs there’s a letter waiting to be sent to the North Pole.

The table is suitably decorated with holly, candles and a red table runner, and it’s surrounded by four chairs. They’re probably the weakest element of the entire se – there are no legs to them, so it looks a little like the minifigures are seated on the floor.

The outside of 10293 Santa’s Visit feels just as well-decorated as the interior, and once again clever parts usage is employed throughout. Green bladed claws are used for hanging holly all along the window panes, roofs and various external areas, and both straight and curved tiles are used to represent snow that’s fallen on the window panes. There’s also a snowman and a wintery tree, which uses three inverted white 6×5 plant leaves to create a glistening effect when the light catches them right. Whether this was intentional or not, it really looks like frost has fallen on them.

All of the decorations not only make the set feel authentic to the holiday experience, but also help to tell a brilliant story. The letter to Santa, the cookies by the fire and the stockings all help to convey and capture that magic feeling that we’ve all had during Christmas Eve, just waiting for that special visit.

While all the side builds that populate the building both inside and out are very smart models, the most impressive techniques are saved for the angled roofs. Sub-assemblies attach to the main property via hinges, which allows them to be moved into position in the most satisfying way. The uniformity of the curved edges and angular shapes creates a very distinctive building.

Now of course, we all know Santa can deliver our presents regardless of whether there’s a chimney or not, but traditionally Father Christmas is best known for popping down the flue to drop off his gifts. The chimney here is fairly large, yet still creates detail using 1×2 round plates with open studs, which are sporadically built into the dark grey bricks to add texture. It looks effective and offers a welcome change from the more tried-and-tested technique of random masonry bricks.

Best of all, Santa does indeed fit inside the chimney – and if you drop him inside, he will shoot down and pop out at the bottom. A hearth is attached to the chimney flue, which contains a clock (the time shown is only a few minutes until midnight) and an adorable family portrait of all three members of the family.

The finished model looks adorable and fits in perfectly with other sets in the Winter Village sub-theme, but also looks wonderful on its own, either displayed front on, or flipped around to the interior. It will no doubt make a lovely display piece on a shelf or mantlepiece during the festive period.

There are four minifigures included in 10293 Santa’s Visit: three family members – a dad, a mum and their little girl – and, of course, Santa himself.

Although the mum and dad use existing parts, they still feel suitably dressed for the season, and the joyous expressions they both have really add to their appeal. The little girl is exclusive to this set, featuring both an exclusive double-sided head piece and torso print for her wintery PJs.

Santa is also exclusive to this set and, alongside the Santa found in 40499 Santa’s Sleigh, comes with dual-moulded legs for the first time. His hat and beard are the same used in previous versions, but his headpiece is new and exclusive to this set. The printing on his torso looks excellent too, and overall it’s the best version of Father Christmas to date.

It’s an incredibly charming model that is a joy to construct and looks wonderful on display. The dual-moulded legs of Father Christmas make for quite an appealing addition as well, and so really there can be no complaints when it comes to the overall cost of 10293 Santa’s Visit.

10293 Santa’s Visit has done an incredible job of capturing the spirit and excitement of Christmas. It’s clear that designer Chris McVeigh obviously has a love for this time of year, and the level of detail that’s gone into the build tells a wonderful festive story. The minifigures add to the joy of the set as they all just look so delighted to be celebrating together, and the anticipation for Father Christmas’s arrival is clear to see on all their faces.

It’s a real treat to put together, with some brilliant techniques on display, making for a very satisfying process with just enough challenge to keep you hooked from start to finish. Being able to build with friends or family members is an added bonus too. The finished model looks excellent, and would make for a welcome addition to any home’s Christmas decorations.

This is definitely a set that every LEGO fan should be including on their wish list to Santa – and who knows, if you are good enough it might even turn up in your stocking come December 25. But if you can’t wait that long, 10293 Santa’s Visit is available to order right now.

Enjoyed this review? Consider supporting the work that Brick Fanatics does by purchasing your LEGO – including 10293 Santa’s Visit – using any one of our affiliate links. Thank you!

How long does it take to build LEGO for Adults 10293 Santa’s Visit?

10293 Santa’s Visit will take roughly three hours to build, depending on experience. This time could be shortened if you have friends or family to help, as there are two separate instruction manuals that can be used to build different sections of the set at the same time.

How many pieces are in LEGO for Adults 10293 Santa’s Visit?

10293 Santa’s Visit is packed full of detail both inside and out, but the main building measures only 27cm wide, 19cm high and 16cm deep.

How much does LEGO for Adults 10293 Santa’s Visit cost?