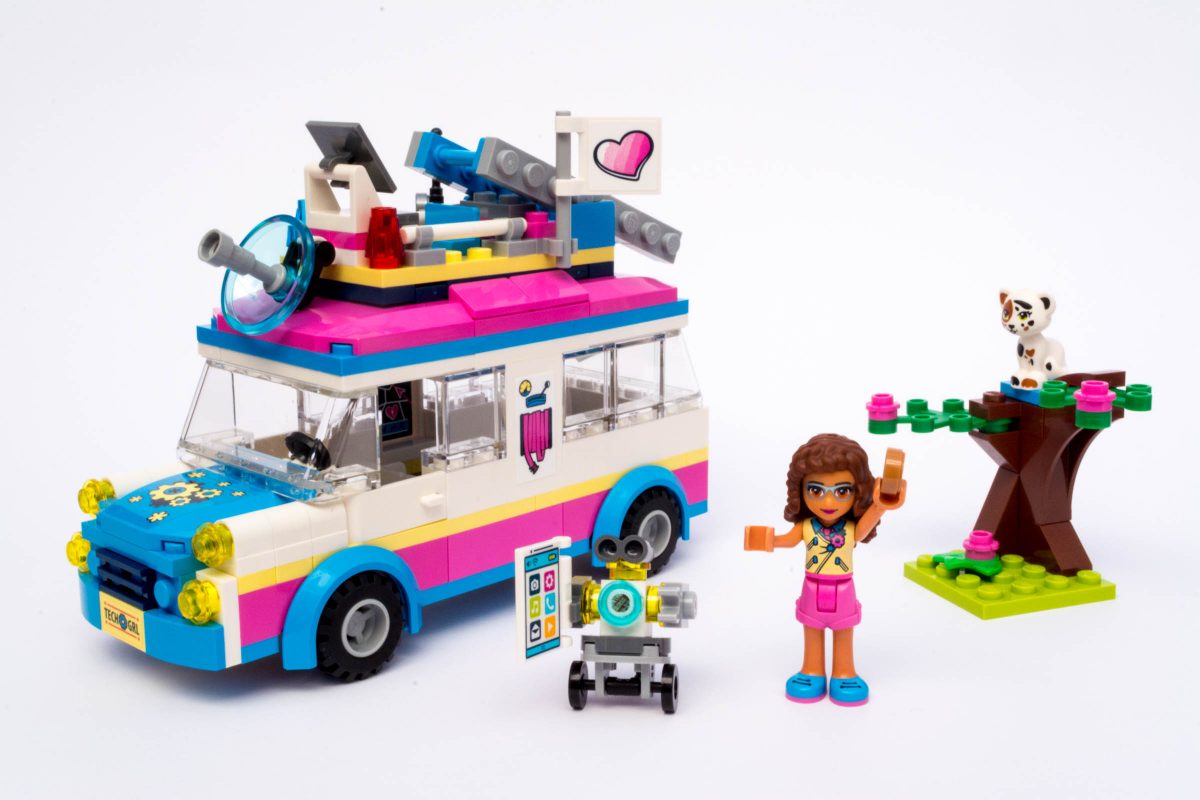 At the end of last year, the LEGO Group did something slightly unexpected with the Friends theme as the five main protagonists were given a design makeover. This was a bold move given how popular and familiar the characters have become since the theme’s release in 2012, but the reasoning went that the evolution of the theme was to allow for greater variety and play experience, whilst still retaining the girls’ main interests and personalities.

The biggest change was for the titular character in 41333 Olivia’s Mission Vehicle. While it may be one of the smaller sets in the current wave, there’s still a lot to enjoy here. 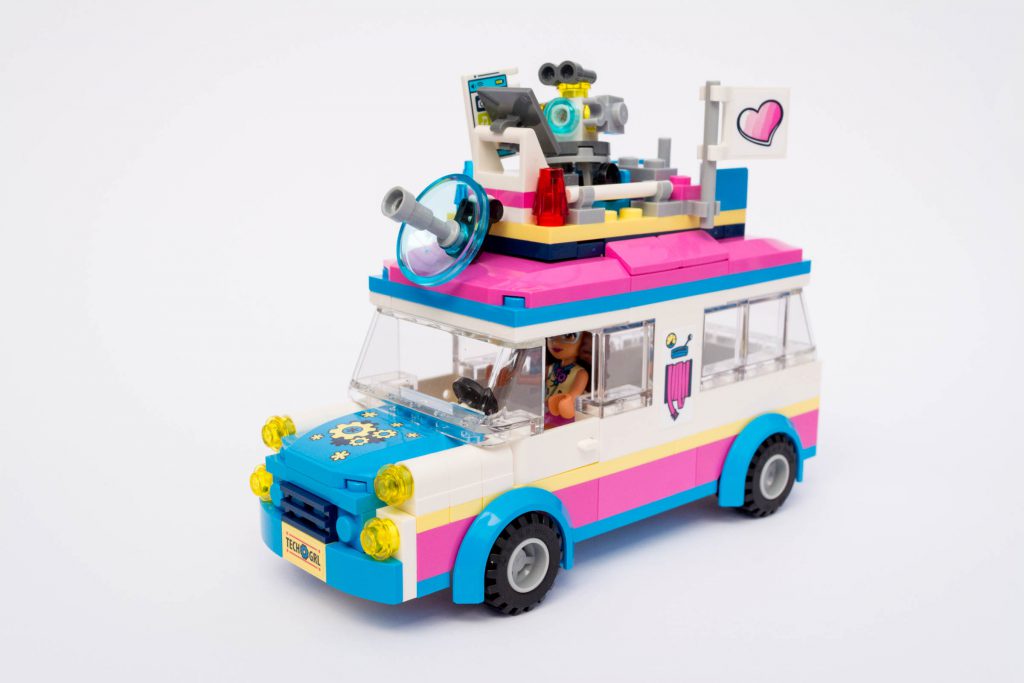 As is quite common for the cheaper sets in a range, the LEGO Group have only provided one mini-doll in this set, Olivia (2.0) along with her brick-built robot companion Zobo and a rather adorable calico cat. 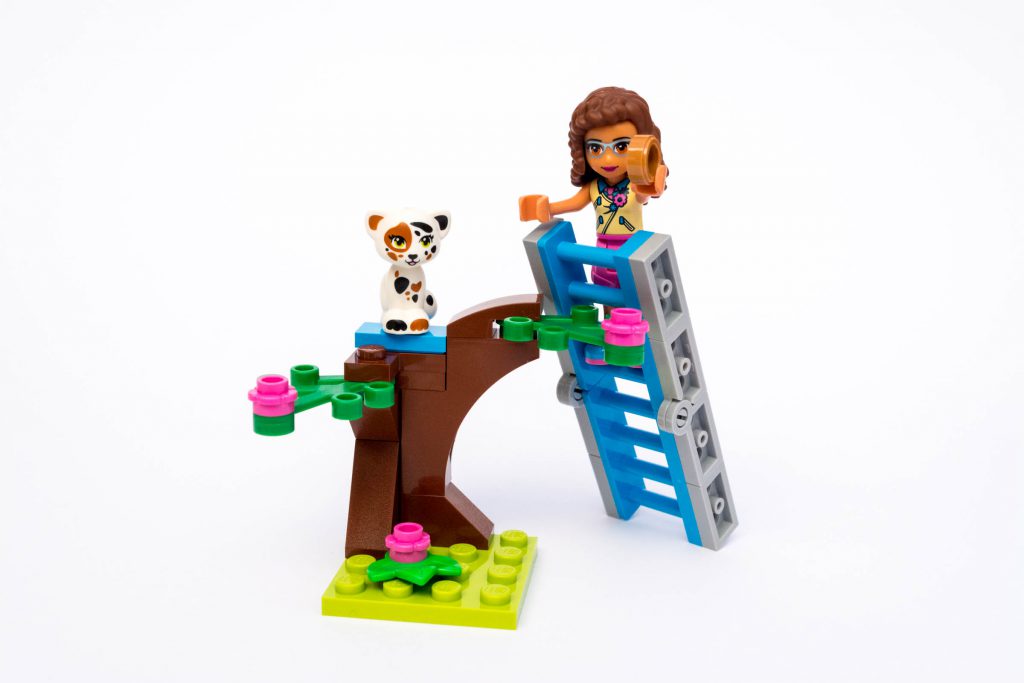 The most obvious differences are that the new Olivia has a slightly darker skin tone and wears glasses. Known for being the inventor of the group, I can’t decide whether her glasses are a positive step for girls looking to relate more, or whether it’s merely attesting to the stereotype that ‘boffins’ wear glasses, given the character’s self-professed love of inventing/engineering. Either way, they look fantastic and are printed in a metallic blue that really pops. Of course it’s not difficult to replace her head with a non-glasses carrying variant if you wished.

Nicely detailed printing on her top, down to the lace details on her shoes, really shows the attention to detail that LEGO designers have maintained. She also has a new hairpiece which doesn’t quite match the illustrated version on the box, but I’m just being picky.

Zobo, who has appeared in a few other Friends sets over the years, comprises of a couple of well-placed elements to create a decent robot look. I quite like the use of binoculars for eyes, which remind me of Pixar’s Wall-E, whilst the use of a lever on its back serves a double purpose; both as an antenna aesthetically, but also to assist with balance as his wheels prevent attachment to any studs. He also comes with a brightly-printed tablet accessory which has only been found in one other set at the time of review.

The build is then split over two main stages, starting with the sparser secondary model before moving onto to Olivia’s Mission Vehicle itself.

The smaller of the two is a fairly simplistic tree which is used to provide story opportunity for our heroine. A couple of brown slopes and some minimal foliage are quickly discovered by the calico cat who then appears to get stuck on the top branch. Luckily Olivia’s van is also equipped with a small foldable step ladder that can be used at a moment’s notice. Whilst this is a very quick build, the Friends line is all about playability and inspiring scenarios for role play, which it achieves through the addition of this extra build. It’s also nice to get a new leaf element along with a few newer pink flower accessories, which are always useful for MOCs.

The vehicle itself is why you’ll be purchasing the set in the first place and one that even City fans might want to pick up as the usual six-stud width is used here. The chassis is built up using plates of various shapes and sizes but it’s nice to see it all brick-built as opposed to single-use specialised pieces. The colour scheme is made up of dark azure, dark pink, bright light yellow and white, but the ratio of these make it look more realistic than some of the other Friends vehicles out there. It certainly wouldn’t be hard to modify and make an ice cream truck, which is what I first thought of when I saw it.

The interior of 41333 Olivia’s Mission Vehicle is completely stud-free with just a steering wheel and printed dashboard slope other than the seats. Amazingly, this set can actually seat all five of the Friends characters which is a big advantage in terms of play opportunity.

Whilst the build itself is relatively straightforward and not massively exciting, it does improve once you get to the detachable roof which features a more greeble-licious section as well as hookable bars to attach the ladder to (for when you are not rescuing cats from trees). A satellite with computer area for Zobo to overlook, alongside a red and blue siren, makes it clear how this vehicle belongs to Olivia. In fact, when looking face on (paying attention to the double curved headlights), you wouldn’t be wrong for thinking this design borrows from the Ghostbusters’ Ecto-1.

There are a few stickers for extra detailing but they are pretty easy to apply and do make the vehicle look more polished, though they are not essential. The flowers and gears on the bonnet are a nice touch but my least favourite to apply are always ones on the inside of panels which luckily we only have two of here. 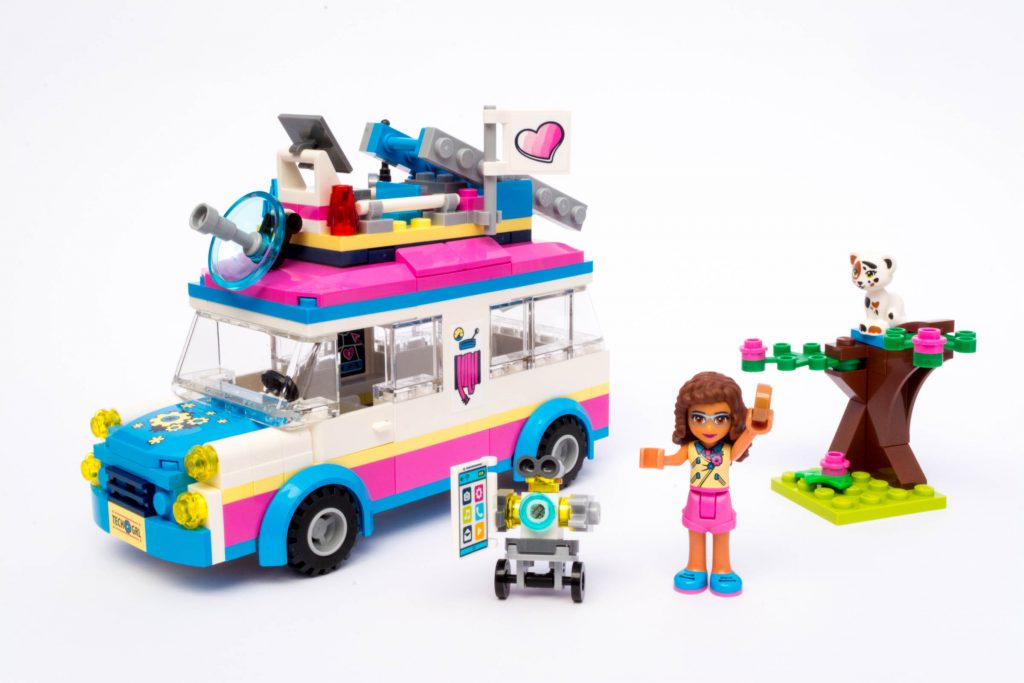 As far as vehicles go, this one is an easy build but does look surprisingly good once finished. Plenty of play value as well as the ability to ferry multiple mini-dolls (or minifigures with a small tweak) makes this a very appealing set for all LEGO fans. Add to that a very reasonable price point and you have got no reason not to pick this one up.

This set was provided for review by The LEGO Group.