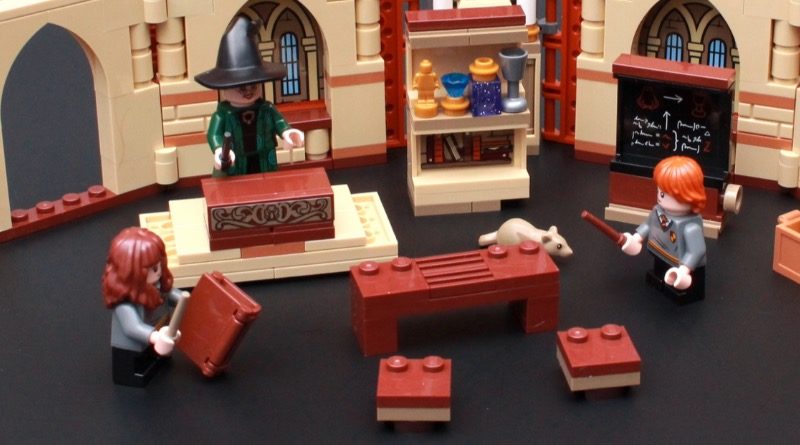 LEGO Harry Potter’s going back to school in 2021 with a series of four buildable books – but is 76382 Hogwarts Moment: Transfiguration Class a real page-turner, or one to leave on the shelf?

It’s pretty clear from the past couple of years that this time around, the Harry Potter theme is geared more towards story and character moments than conflict and peril. This summer’s rumoured line-up of sets supports that theory by reportedly entirely eschewing the grim finale that is the Deathly Hallows, but it’s also been borne out by January’s four new Hogwarts Moments sets.

Each of these captures a specific classroom at Hogwarts School of Witchcraft and Wizardry, then collapses it into a foldaway book. It’s a neat hook, but one that could easily outstay its welcome across a full four sets. Taken individually, though, these classes undoubtedly bring something new to the theme – and first on our timetable is 76382 Hogwarts Moment: Transfiguration Class.

It’s not often that opening a LEGO box can immediately clue you into why it costs what it does – you usually need to dive into the specifics of the bags for that information – but it’s hard to miss the huge book cover pieces that drop out of 76382 Hogwarts Moment: Transfiguration Class.

One is printed, which you’ll either find great or frustrating – the sticker would have been unbearable to align, but it makes it completely useless in any other contexts – while the other is plain, as is standard across all four of these sets. In 76382 Hogwarts Moment: Transfiguration Class, they’re dark orange, in line with this book’s corresponding house of Gryffindor.

Okay, it’s pretty easy to see what the LEGO Group was going for across its Hogwarts Moments sets: these things need to blend in seamlessly with your bookshelf, and bright, bold colours probably wouldn’t have done the job. Instead, you can expect muted or more subtle hues right across the board, including here with Gryffindor.

Except, hang on, aren’t these sets… for kids? And aren’t the actual Harry Potter book covers all bright reds, blues, greens, yellows and purples? The answer is yes on both fronts, so why the LEGO Group opted for the colours it did for these sets is pretty puzzling.

If you can get past the colour scheme, though – and absolutely fair play if you can’t – the concept here is pretty novel all around. We’ve had foldable books in LEGO before, either in the LEGO Ideas theme with 21315 Pop-Up Book or in Disney’s Storybook Adventures, but these Harry Potter models represent a kind of halfway house between those two extremes.

The book itself is comprised of regular clips and plates (beyond those new cover elements), offering a more involved experience than the Disney sets, but you’ll have to manually assemble and arrange the contents into a scene – there’s no pop-up function here. (That would probably have been a bit too much to ask for in a £27.99 set.)

Those interior elements don’t offer anything especially dramatic in and of themselves, but it’s impressive engineering to make them all come together within the confines of the 10×16 footprint that the covers dictate. Even more impressive is how, once together, they loosely mimic the pages of a book thanks to the external tan elements on display, offering a nice contrast to the dark orange cover.

As you’ve probably guessed from these images, though, the printed piece bonanza basically begins and ends with the book cover. Pretty much every other detail in 76382 Hogwarts Moment: Transfiguration Class relies on a sticker, and you won’t have much fun applying most of them – especially those that sit on the inside of panels. No, not much fun at all.

For that, you’ll need to look to the play potential the set offers, which is thankfully plentiful. Not because of any particular play features baked into the design – there are no functions to speak of – but the storytelling opportunities offered through what’s ostensibly a location set in disguise, borne out by its pop-up diorama and told through its minifigures. And for a set built around a book, that makes a lot of narrative sense.

Each and every Hogwarts Moment set includes a three-pronged combo of a professor and two students, and in this case, the entire trio hails from Gryffindor. Ron Weasley and Hermione Granger are both just as good as they were in 2018, with updated torsos to boot – those house crests are new – but they’re not necessarily set sellers in and of themselves.

That honour lies with Professor McGonagall, who finally gets the treatment she deserved in 2018’s 75954 Hogwarts Great Hall with a new dual-moulded hat and hair piece. No longer will Hogwarts’ Deputy Headmistress look bald beneath her witch’s hat, which we’re sure is a relief to Dame Maggie Smith, who presumably cares very deeply about her LEGO minifigure representation.

McGonagall also has a new double-sided head (which was basically impossible with the older hat element, unless you wanted to sub her in for Professor Quirrell/Voldemort in the first movie’s pivotal confrontation), topping off one of the theme’s best minifigures to date – high praise for a theme often anchored around the design of its plastic people.

Does that mean 76382 Hogwarts Moment: Transfiguration Class is worth investing in for Professor McGonagall alone? Not quite, because £27.99 is a hefty price to pay for a single minifigure (here’s looking at you, 75299 Trouble on Tatooine). But there’s also more to this set than just one minifigure, and on the basis of crossing that extremely low bar, it’s a little easier to recommend 76382 at full price.

It’s not entirely easy, though, because the end result here still feels a little diminutive for the price you’ve just paid. Sixteen studs isn’t a great deal of height, so it won’t exactly look enormous on your bookshelf, and there’s not much in the way of interactivity.

An extra minifigure would have gone a long way (particularly next to last year’s 75967 Forbidden Forest: Umbridge’s Encounter, which included five characters for £24.99), and it’s hard to feel great about knowing you’re paying predominantly for those huge 10×16 book cover elements you probably won’t use anywhere else.

There are things to like in 76382 Hogwarts Moment: Transfiguration Class, even if they’re not the colour scheme or the price. Professor McGonagall is a marvellous minifigure; there’s plenty of fun to be had for kids who enjoy story-driven play; and watching everything collapse into the book frame is a moment of geometrical genius.

But, you know, it really should have been red.

This set was provided for review by the LEGO Group. Support the work that Brick Fanatics does by purchasing your LEGO Harry Potter sets through one of our affiliate links.

How long does it take to build 76382 Hogwarts Moment: Transfiguration Class?

76382 Hogwarts Moment: Transfiguration Class takes roughly 45 minutes to build, but you’ll spend a good chunk of that sweating while trying to carefully align a very frustrating set of stickers. Otherwise, it’s a simple build that connects into something more impressive.

How many pieces are in 76382 Hogwarts Moment: Transfiguration Class?

Like all Hogwarts Moments sets, 76382 Hogwarts Moment: Transfiguration Class measures approximately 12cm tall, 8cm wide and 4cm deep when finished, which the LEGO Group reckons is the perfect size to carry around with you. We can’t disagree.

How much does 76382 Hogwarts Moment: Transfiguration Class cost?