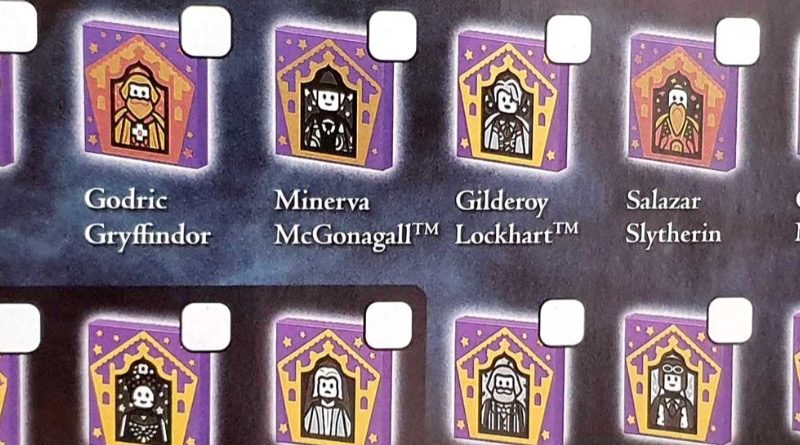 Hoping to pick up a complete collection of Collectible Wizard Cards in this year’s LEGO Harry Potter 20th anniversary sets? Here’s the 16 witches and wizards you’ll need to look out for.

Each of this summer’s six 20th anniversary sets – which celebrate the original 2001 wave of Harry Potter sets in their aesthetics, subject or minifigures – includes a randomised selection of 2×2 printed tiles, designed to emulate the in-universe Chocolate Frog cards.

But because the ones you end up with are random, there’s no guarantee that you’ll take home a complete set that way. If you want to collect ‘em all, then, you’ll probably need to either pick up duplicates, or hunt down the missing tiles on the aftermarket. Neither of those is an ideal solution – none of the six sets lend themselves to amassing multiples – but nobody said being a collector was easy.

Indeed, figuring out which tiles you’ve got and which you need is really a task in and of itself, because none of the Collectible Wizard Cards are printed with the identity of the witch or wizard emblazoned across it. Unless your Wizarding World knowledge is second to none, you’re probably going to need a reference guide.

That’s where the instruction manual in each of the six sets comes in. Positioned at the back of those books is a checklist of all 16 characters that comprise the collection – and they span both the Harry Potter and Fantastic Beasts franchises. Here’s the list in full:

Through the process of elimination, however, we’ve managed to determine the tile that’s supposed to represent one of the four founders of Hogwarts school. You can check that out in the images below, which will hopefully come in handy when you’re trying to figure out whether you’ve got them all.

For our part, those four sets brought us 12 unique tiles, with only two duplicates in total. That seems like pretty good going – and means we’ll hopefully bag the last four across 76392 Hogwarts Wizard’s Chess and 76395 Hogwarts: First Flying Lesson – but we’ll be curious to see if it bears out for everyone when the 20th anniversary wave arrives on June 1. Feel free to tweet us if your experience with the Collectible Wizard Cards differs.