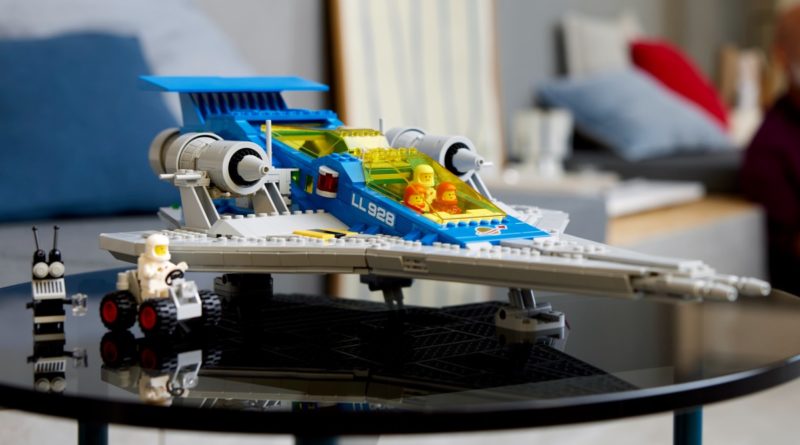 A reimagined version of a LEGO Classic Space set will soon be available for LEGO fans.

Revealed via LEGO CON as part of the LEGO Group’s 90th-anniversary celebrations, 10497 Galaxy Explorer is a tribute to the very first LEGO Space sets. The set it draws inspiration from (497 Galaxy Explorer) was first released back in 1979, and its aesthetics have retained plenty of fans since then. The LEGO Movie famously paid tribute to this era via characters like Benny, and LEGO sets like 70816 Benny’s Spaceship, Spaceship, SPACESHIP!.

10497 Galaxy Explorer sticks very closely to that era’s design features, although it combines them with a few modern upgrades. Its wings feature more elegant shaping, and pre-moulded elements (like its loudspeakers) now use buckets instead, reflecting the more creative parts usage in modern LEGO sets.

Two large yellow windshields ensure maximum visibility for the ship’s occupants. These appear to be attached more firmly than the one on 70816 Benny’s Spaceship, Spaceship, SPACESHIP!, which had a tendency to detach too easily. As such, this should be an excellent toy for both play and display.

The interior of the ship is very spacious, capable of holding four minifigures and various control systems. Four Classic Space astronauts are included for the voyage – two white, two red – alongside a small, retro-styled robot and a moon buggy. It’s unclear, at this stage, if these latter accessories can be stored within the ship as well.