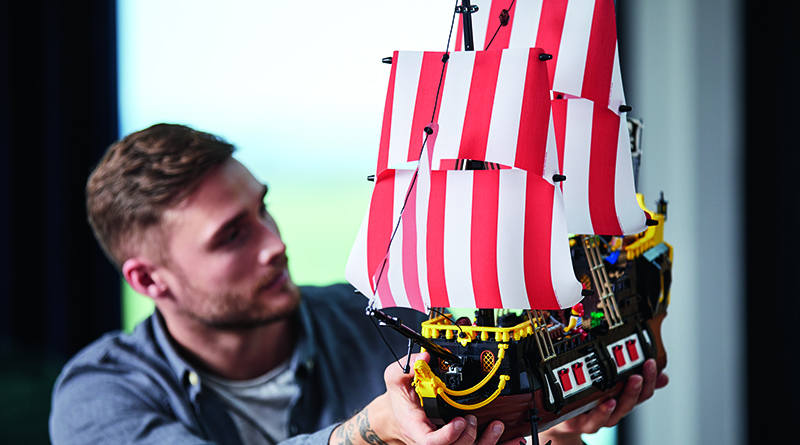 LEGO Ideas has just announced 21322 Pirates of Barracuda Bay, a set that captures the spirit of the classic theme using a massive 2,545 elements.

Wow, just wow… just… wow. What brilliant, insane, nostalgia fuelled fiend came up with the concept for this set? Whoever they are, they are my new favourite person.

I would have been perfectly satisfied with a set that was quite close to The Pirate Bay fan submission by Pablo Sánchez Jiménez, but the LEGO Ideas team are releasing something that has me absolutely desperate for the release date, despite it only being a week away. This is the LEGO Pirates of my dreams.

The entire concept of this set – that Captain Redbeard has spent the last few decades shipwrecked, living on an island built from the wreckage of 6285 Black Seas Barracuda, is a fantastic starting point. But then to actually design the minifigures in a way to represent that is showing a fantastic degree of faith in a LEGO set’s ability to tell a story – and that is one of the aspects of what made LEGO Pirates so great 31 years ago.

To have an island that genuinely looks like a shipwreck is also truly wonderful. While many of the LEGO Pirates island sets were good fun, few genuinely looked like shipwrecks. Often they looked like a fusion of a castle and a shipwreck. But with this kind of piece count and modern LEGO techniques at their disposal, the designers have made something that is visibly built from a ship.

That brings me to what elevates 21322 Pirates of Barracuda Bay even further. An island model of this quality and steeped in this much nostalgia, at a reasonable price of £179.99 for 2,545 parts, would have satisfied me. But that it can actually be transformed into a full, modern replica of the Black Seas Barracuda really is going the extra mile. It is as if the LEGO Group are giving fans too much in this one box (and if anyone from the company is reading this, you are not, keep it up, we are fine with getting two models for the price of one).

To see a LEGO set packed with wheels, anchors, flags, sharks, rowboats… that is a joy. But to see one with the distinctive colour scheme of 6285 Black Seas Barracuda, 31 years after the ship set sail, is too much for a life-long LEGO Pirates fans to take.

The first impressions are very, very positive. Let’s grab a bottle of rum and sit refreshing LEGO.com until this set appears.