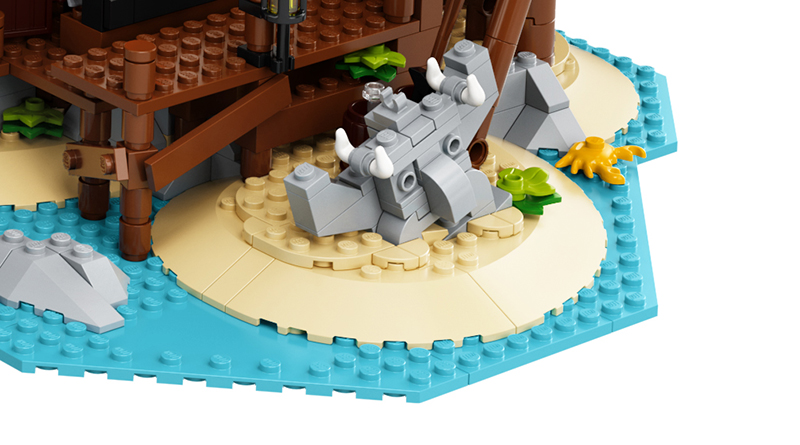 The newly announced LEGO Ideas set, 21322 Pirates of Barracuda Bay, is packed with nods to the classic LEGO Pirates theme – Brick Fanatics picks out ten of them

LEGO Ideas 21322 Pirates of Barracuda Bay is the ultimate LEGO Pirates set. The set, announced today, is designed for an adult audience in terms of not just detail and build level, but also in terms of references to the classic theme that so many LEGO fans grew up with.

While the set itself is directly inspired by 6285 Black Seas Barracuda, there is also a nod to Captain Redbeard’s next ship, 6286 Skull’s Eye Schooner. In the captain’s cabin, the greying pirate has a fold-down bunk with a black and white striped bedspread.

While not a match for the original LEGO version, the Jolly Roger flag is clearly influenced by it. When LEGO Pirates returned in 2009 and 2015, the sets had opted for a slightly cartoony look for the flag. This version blends the classic 1989 style with the more recent iterations.

There was a very distinct way of building prisons in LEGO Pirates. It generally involved taking the classic doorframe and barred door and clipping them together. There would then be perhaps another stud’s space between that and the back of the cell, meaning that the prisoner did not have much space. Using modern elements, that classic style has been replicated here.

The classic 1×4 element was used to decorate the rear of 6285 Black Seas Barracuda. While it is no longer in production, the LEGO designers have replicated the shape of it using four modern elements. This is real attention to detail.

The minifigures in the set are intended to be the same characters that fans met back in 1989, with updated deco to match modern design standards. Given the storyline suggesting that they have been stranded for 30 years, some of them are looking a little older. Redbeard now has a touch of grey in his beard, depicting the passage of time.

The Islanders were introduced in 1994, a tribe of people who lived a natural existence. They had stone statues, presumably a tribute to their gods. It seems that they have not fared well since, as in 21322 Pirates of Barracuda Bay the head of an Islander statue is half-buried in the sand. This great touch is both a nice nod to the 1994 sets and an indicator of the time that has passed on this island.

Whether the poor fellow included in 21322 Pirates of Barracuda Bay is a redcoat or bluecoat is unclear, as all that is left of his uniform is his hat. The soldiers were the enemies of the pirates from 1989, sporting the hats seen on one of the skeletons included in this model. So they don’t live on exactly, but at least they are referenced in the set.

In 6260 Shipwreck Island, children put down tiled elements, then built 1×4 arches over the top. Inside was the perfect space for hiding a treasure chest. 31 years later, the exact same method is used to hide a treasure chest underneath the island’s structure in 21322. Some of the references in this set are definitely deep cuts.

What do you do with a classic rowboat? Build two seats inside and clip a flag to the back. Some things worked so well back in the day, they don’t need to change.

Something was very exciting about seeing the big-box LEGO Pirates sets in toy stores. A huge flap on the front of the box revealed a plastic window beneath, showing off some of the most exciting content. In certain territories, that box flap told a story of adventure and excitement on the high seas. In the set’s LEGO Ideas instruction book, a story written in the same style updates fans on the escapades of Captain Redbeard and his crew.