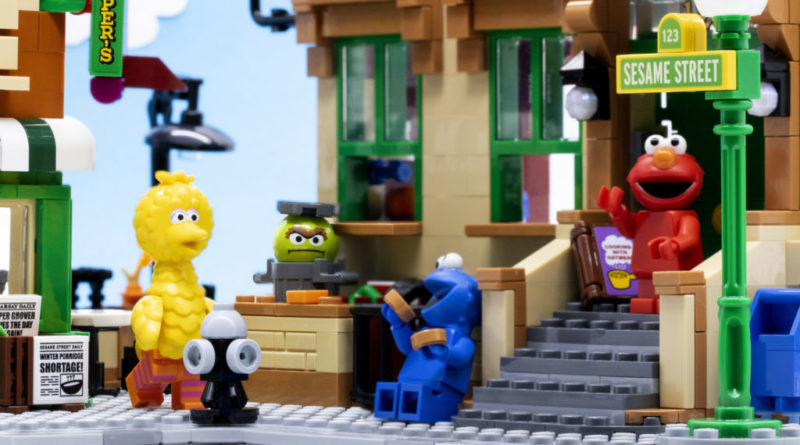 Today’s review is brought to you by the letters L,E,G,O and the numbers 1,2,3. LEGO Ideas 21324 123 Sesame Street offers fans of the children’s show a wonderfully nostalgic model but might leave others yearning for a more grown up build.

Sesame Street is the longest running children’s television show of all time. It premiered in 1969 is still going strong after 49 seasons and a whopping 4,526 episodes. The characters are not only iconic but some are even considered ‘living legends’ – Big Bird was granted this  status by the United States Library of Congress. The show holds a special place in many childhood memories.

Ivan Guerrero designed a build based on Sesame Street, seeing it reach 10,000 votes – the Count no doubt enjoyed watching the numbers tick up. 21324 123 Sesame Street is the outcome, giving fans an opportunity to take a trip down memory lane. It builds the famous New York apartment block and neighbouring Hooper’s General Store.

The set also comes with a cast of six instantly recognisable and much loved characters; Big Bird, Cookie Monster, Elmo, Bert and Ernie and a wonderfully inventive Oscar the Grouch. The minifigures are not only adorable but mark a first in the Ideas theme – brand new moulds have been produced especially for this set.

An 18+ age recommendation suggests this will be both a complex and involved building experience as well as a beautiful display piece – but adapting the old adage, never judge a LEGO set by its cover…

The set contains 1,367 pieces spread over 11 bags with an additional two 16×16 light bluish grey baseplates. The manual, as expected from a LEGO Ideas set, contains information about the long running children’s television show, interviews with the fan designer and details on how the LEGO design team turned his vision into a fully fledged LEGO product.

Building begins with constructing the base for both 123 Sesame Street’s apartment block and Hooper’s General Store. The combination of several large plates and the two 16×16 baseplates makes for a considerable footprint within just a few stages. It’s a fairly simple stage and by the end of the first bag the foundations, apartment steps and basement area have been finished.

For fans of the show, what begins as a LEGO build soon turns into a glorious reminder of why Sesame Street was such a captivating part of childhood. Easter eggs drawing from over 50 years are spread across the build and floods of nostalgia come washing over at nearly every stage.

Elmo’s room comes complete with his pet goldfish Dorothy. Bert and Ernie’s room includes Ernie’s rubber ducky, Bert’s bottle cap collection and his famous green chair. A personal favourite inclusion is the 12345 clock that has been a mainstay since the 1970s. Even the twiddle bugs window box is included, built onto the exterior of Ernie’s room.

Famous characters that didn’t quite make the cut are included via the use of stickers. A picture of The Count hangs on the wall of Cookie Monster’s room, Guy Smiley appears on the TV screen, Abby Cadabby and Biff and Sully’s Construction Company posters adorn the outside of the buildings and in Big Bird’s nest can be found a picture of his best friend Snuffleupagus – it’s clear a lot of research and love has been poured into the details.

A LEGO set needs to offer more than just fond memories though, and this is perhaps where the set starts to fall down. The main build does demonstrate some interesting techniques and clever parts usage; Elmo’s bed is made from a smart and detailed combination of curved bricks and 1×1 half tiles, and his bedside light, built from a blue tap piece, 1×1 cone and 1×1 round tile is simple yet effective. Ernie’s bathtub feels like a unique design when compared with other bathtub designs found in recent LEGO sets and the sloped curves used for the shower curtain is particularly inspired.

The outside details have moments that are equally satisfying to construct. The steps are nicely finished with a SNOT technique using two 1×3 tiles, a 1×1 tile and a 1×1 bracket, while the window arches constructed using 1x2x1 brick with studs, a 1×1 bracket and 1×1 tiles to complete the look. The circular facia is a wonderful little design, consisting of 1×1 bricks with scrolls, two tan 1×1 hearts, a 2×2 bracket and a 2×2 round tile. The sub assembly is then flipped upside down and clipped onto the front of the building, a very original and clever method.

Despite those highlights, it’s hard to shake the feeling that for the majority of the main apartment block the build feels straightforward and a little too simple in places. It’s a quick build and there aren’t many other notable moments. If the age label was 8+, it would be expected, but this is marked 18+, suggesting some extra level of sophistication.

Strangely, even though Hooper’s General Store and Cookie Monster’s room are a fraction of the size of the larger building, they are probably the most enjoyable and detailed filled sections of the entire set. The interior of the general store includes a wealth of printed tile pieces including 1×1 tiles with rainbow clouds, unicorns, peanut packets, drink cartons and more. They add great detail to the set, acting as goods on the shelf and offering excellent piece for anyone’s parts collection. Cookie Monster’s room has a number of sub assemblies that are fun to construct, a highlight being the old school TV set. It’s a very simple but unique design that looks fantastic.

There is a downside to this section – the positioning of the interior looks slightly odd when viewed from the front. The exposed interior gives an unfinished feel, a strange design choice that takes away a lot of the aesthetic and display appeal.

Despite the simplicity of the build, there are lots of lovely details added to the exterior; mailboxes, fire hydrants, fire escapes, discarded pizza boxes and rubbish bags in the trash. They all add to the feeling that Sesame Street could quite easily be a real place and when the minifigures are placed in and around the set, it really brings the whole thing to life.

What the set lacks in the build process it makes up for when it comes to the minifigures. Six utterly adorable and delightful characters are on offer. Each one features a unique mould especially designed for this set, all excellent renditions of the beloved monsters they represent.

A brand new and exclusive rubber mold has been used for Big Bird’s giant torso and the conventional minifigure arms have been replaced with two wing appendages. His legs are decorated with the familiar striped pattern and he looks utterly perfect.

Bert and Ernie are both dressed as to be expected and both head pieces look incredibly accurate. It would have been nice to have seen Bert with a more grumpy expression, as this would have been closer to his character, but that’s a minor note.

Cookie Monster and Elmo both have wonderful new head pieces that impressively match up to their on-screen appearance, with Cookie Monster’s googly eyes inparticular captured magnificently.

Oscar the Grouch has a very unique design which sees a printed piece for his head placed onto a plain regular minifigure head. This allows him to fit inside his trash can home and have suitable movement for display and play. He also comes with a ridiculously cute slimy worm printed onto a 1×1 heart piece.

The minifigures are some of the best that the LEGO Group has released this year and the exclusivity will make them very desirable. There are also a lot of rare and interesting pieces, as well as a large collection of printed parts included within the set.

For what the build offers as a complete experience it does feel slightly overpriced, a price tag just under £100 would feel fairer.

21324 123 Sesame Street isn’t going to win any awards for innovation, especially when compared to some of the recent sets that LEGO Ideas has been releasing. It’s not like there aren’t moments of inspiration but it’s just not quite as intricate as you’d expect from an Ideas set marked with an 18+ age recommendation.

What it lacks in creativity though it does makes up for in pure childlike joy – those who grow up on the TV show will love discovering each and every reference. They will also be completely delighted by the minifigures, which are perfectly executed and this may be the only time these characters make it into a LEGO box.

The main gripe is the 18+ age range attached to the set. The LEGO Group needs to start being consistent with this marking, otherwise they risk alienating the adult market. Themes such as LEGO Art or the recent LEGO Star Wars helmet collection feel like grown up sets, designed with adults in mind, featuring intricate building techniques and created primarily for display. This set on the other hand falls short on both categories, the building techniques are no more advanced than a regular build and while it looks fine on display it offers up so much more in terms of play value – the six year old consulted for this review has been utterly captivated since the moment it arrived and hasn’t stopped playing with it ever since.

It’s hard to be negative on a set based around an IP that has given so much love and joy to the world, and it is an incredibly adorable thing, but it is hard to escape the feeling that it should have been aimed at a wider audience. Those with children who love the show should disregard the age marking – within reason, it’s still not suitable for anyone still liable to put small things in their mouth – and make it a family building experience.

21324 123 Sesame Street will be available at LEGO.com from November 1. You can help support Brick Fanatics’ work by using our affiliate links.