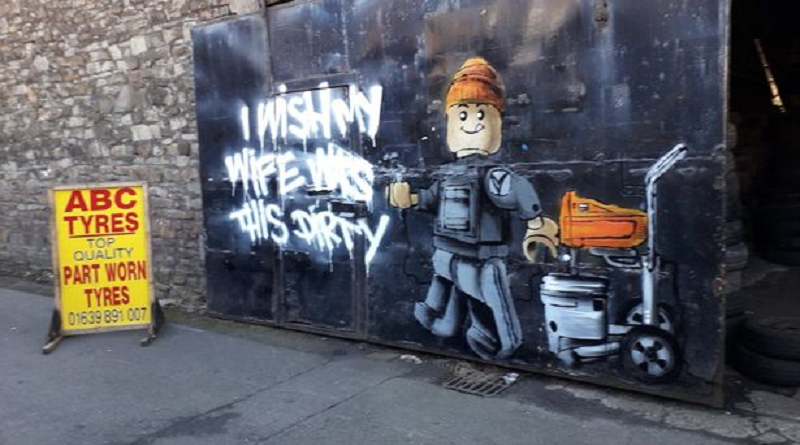 Street art featuring LEGO minifigures has turned up in the Welsh town of Port Talbot, Wales.

Street art has appeared in the town of Port Talbot that has been credited to the artist Ame72. A local rugby club found two pieces on their back doors – one shows a LEGO minifigure cutting around a dollar face emoji and one shows a small LEGO minifigure spraying.
At Taibach rugby club, in Commercial Road, two pieces appeared on two of their back doors on Friday night.

One shows a LEGO minifigure cutting around a dollar face emoji – a half reference to the Port Talbot Banksy having been sold – and the other one is a small Lego man spraying. Nearby, another piece shows a LEGO minifigure wearing an orange hat spraying the text: “’I wish my wife was this dirty”. It is presumed to be a reference to pollution in the area.

ABC Tyres, where the third piece was sprayed, is considering what to do with the piece. “I was stunned when I saw it on Saturday morning – I thought someone had vandalised the door at first,” Tony Evans said to Wales Online. “When I got closer I realised that it was a work of art. 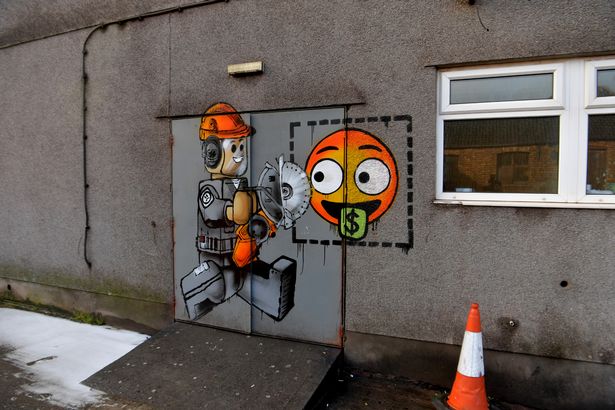 In the same town, works by Banksy have proven a draw for tourists. Art Dealer John Brandler estimates that the Ame72 pieces could sell at auction for between £1,000 and £3,000.