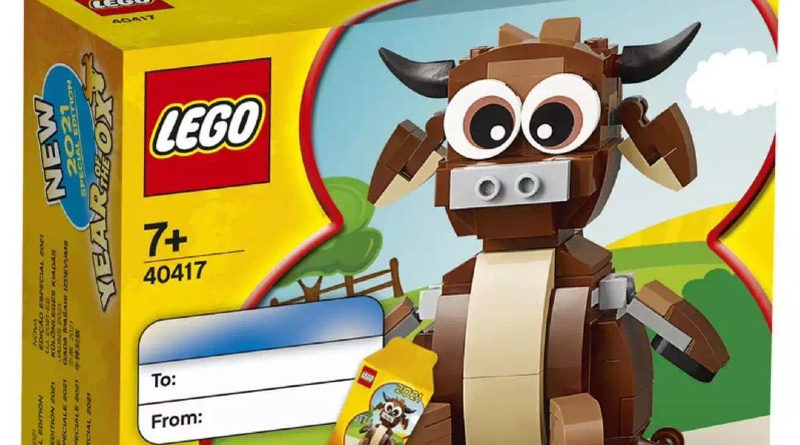 The LEGO Group has unveiled 40417 Year of the Ox as a gift-with-purchase through its official channels in February, tying into 2021’s Chinese New Year celebrations.

This year’s lunar festival falls on February 12, which fits perfectly with the seasonal set’s availability window of February 1 through 14. There’s no guarantee that the buildable ox will last until Valentine’s Day, of course, so you’ll probably want to get your order in as soon as possible when it goes live.

In the US, you’ll need to spend $85 to get your hands on 40417 Year of the Ox, which will apparently be available through both LEGO Stores and at LEGO.com. There’s no word yet on the equivalent UK threshold, but it’s safe to expect you’ll be able to bag it with an £85 spend online, so picking up the brand new Chinese Traditional Festival set 80107 Spring Lantern Festival (where available) will automatically qualify your order for the freebie.

It’s not the only gift-with-purchase that will be available in February. According to the US LEGO Store calendar, a $40 spend online or in-store in the same period will also net you 30411 Chocolate Box & Flower, while the week after will see 30539 Lloyd’s Quad Bike available with NINJAGO purchases of $40 or more – but only in LEGO Stores.

The latest LEGO Ideas set, 21325 Medieval Blacksmith, is due to launch on February 1, so this batch of goodies – including 40417 Year of the Ox – should give you some incentive to pick it up day one. And it’s definitely worth getting your hands on, as you can read in our early, in-depth review.