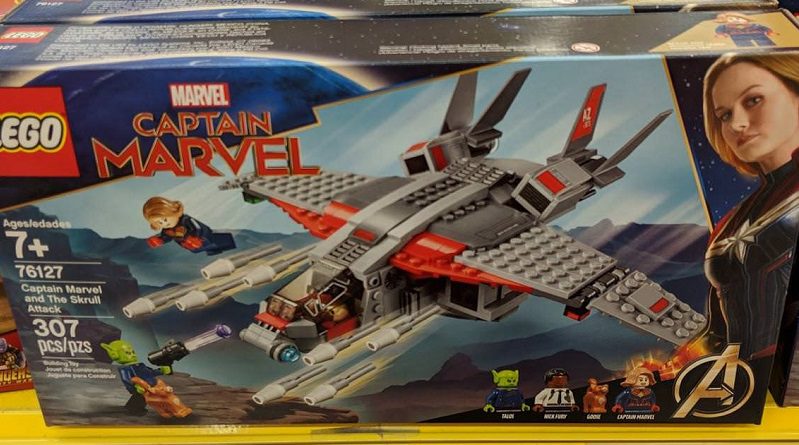 Two Reddit users have found LEGO Marvel 76127 Captain Marvel and the Skrull Attack at the Toys R Us store in Ottawa, Canada. The new set will be part of the 2019 LEGO Marvel line, and was not expect to launch until after Christmas. At Toys R Us, it is priced at $39.94. u/cf18 shared front and back images of the box and optiprimas shared an image too, from the same store.

LEGO Marvel 76127 Captain Marvel and the Skrull Attack contains 307 pieces, including minifigures of Captain Marvel herself, younger Nick Fury, Talos and Goose (Carol Danvers’ pet cat). The main build is Captain Marvel’s spaceship, with very few Skrull included considering the set’s name. When the 1990s set movie is released next year, fans will find out how the super hero fits into the Marvel Cinematic Universe.

Today, LEGO Marvel Super Heroes sets themed around Spider-Man: Into the Spider-Verse were released at shop.LEGO.com. The launch of these sets coincides with a promotion that means any order totaling £85 or more will get 42093 Christmas Carousel added on for free.