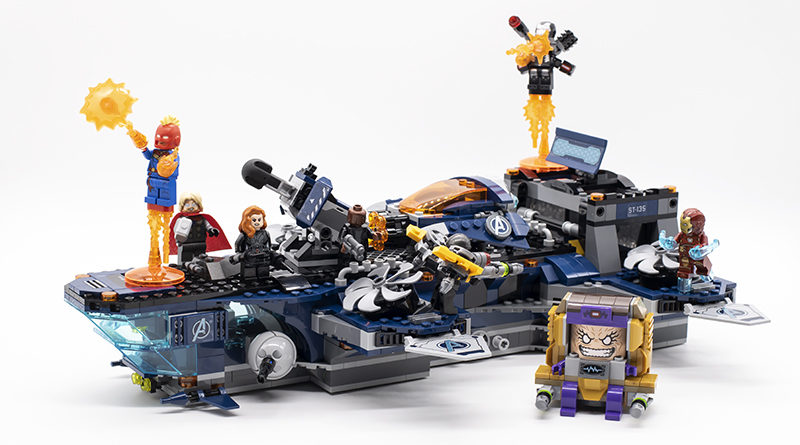 LEGO Marvel 76153 Avengers Helicarrier transforms the iconic superhero HQ into a set that prioritises play over display, so is there enough here to tempt fans of all ages?

Every good superhero needs a good superhero base, and you’d be hard-pressed to find a better one than the Avengers’ airborne HQ, the Helicarrier. While fans have already been able to build a version inspired by the Marvel Cinematic Universe, namely 2015’s 76042 The SHIELD Helicarrier, this current iteration is based off the 2019 video game, Marvel’s Avengers.

76153 Avengers Helicarrier boasts an impressive piece count of 1,244, spread over nine bags. The first two concentrate on the smaller additional builds contained within the set: a brick-built jet pack for the included A.I.M Agent, a small Avengers jet, and a brick-built M.O.D.O.K., the bizarrely-proportioned supervillain.

The brick-built jetpack is a fun little sub-assembly and, together with the modified stud-shooter, makes for quite an impressive addition to the standard A.I.M. minifigure fans have become accustomed to.

Conversely, the small jet is disappointing. The build is uninspired, the design looks squat, the wings – attached via a 1×2 bar connected to a 1×2 modified plate with clip – feel far too gappy, and the front six-stud-shooter looks oversized. It doesn’t make the greatest of first impressions for the rest of the set.

M.O.D.O.K., however, is a much more enjoyable build. The main body is constructed on a 6×3 curved plate using a technique similar to that of a BrickHeadz build. There is both great texture and shaping achieved throughout the build, looking great from all angles. Pearl gold 2×2 and 2×3 curved slopes make up the armour, with 1×2 grilles adding extra details.

Dark purple minifigure arms with Technic pins (first seen in the Super Mario theme and new in this colour) are used for his tiny arms, and an excellent exclusive printed 2x4x2 half-cylinder is used for his menacing face. He looks comically out of proportion, but then he is supposed to, and this brick-built version is quite an impressive rendition. When compared with the jet, they feel miles apart in design and quality.

With the smaller builds out of the way, it’s on to the main build, the Helicarrier. Rather surprisingly for a model this large, the main chassis is constructed with classic techniques using just plates and system bricks, rather than a technic frame. The framework isn’t completely devoid of Technic parts, though: the Helicarrier is split into three sections, which connect together via pins. This is a completely understandable necessity, as it helps with the overall integrity of the finished model. There is also a fairly impressive and intricate gear system (for a set aimed at ages 9+) running through the entire hull, which controls the movement of the four rotor blades.

In more conventional Technic sets, the gear systems are assembled in one go. Here, it’s constructed in small increments alongside the main structure – so without really realising it, you’ve suddenly put together a huge internal gear system. It’s satisfying to construct and even more pleasing to watch in action. When the Helicarrier is pushed along, a hidden wheel in the centre attached to the gear system turns all four rotor blades. It’s a smooth action and looks very effective.

It’s probably the most enjoyable aspect of the build, as the rest feels fairly standard and – for a set this size – comes together pretty quickly. However, the cockpit (which has space enough for three minifigures) does utilise an interesting inverted building technique. The two large trans-light blue windscreens are flipped upside down, with a few pieces added for extra detail, before being connected to the main hull via clips.

The trans-light blue adds to the overall aesthetic appeal of the finished craft, and the front has some nice shaping to it as well. It’s probably the most detailed section of the model, with grilles and trans-clear, orange and yellow 1×1 plates adding some attractive detailing to either side. The shaping continues towards the rear, through the use of inverted 1×2 dark blue slopes and 1×3 dark grey slopes for the undercarriage and the overhanging wedge plates attached to the main structure on top.

The build is finished with several play features, including a large rotating cannon at the front, an opening cockpit section, a moving rear radar dish, adjustable sphere cannons on either side, and the aforementioned rotating propellers. There is also a large jail cell built into the back, with a brick-built gate that can open and close. It boasts an impressive amount of size as it can comfortably fit the M.O.D.O.K. figure inside. However, for a set this size, it feels like an awful lot of space is wasted. Rather than use the internal section for the Technic gear system, it may have been wiser to use that space for making more interesting areas for the minifigures to be placed inside.

There are eight minifigures included within the set, or seven if you discount the brick-built M.O.D.O.K. (can he really be classed as a minifigure?).

Of the heroes, two are exclusive to this set, and both are exceptional variants. War Machine looks fantastic, with incredibly striking black and silver printing across the legs, torso and helmet, but what really makes this War Machine special are the included accessories. A variety of weaponry is connected to an angled neck bracket with clips at the rear, the highlight being the roller-skates used to represent his shoulder-mounted Gatling gun.

Captain Marvel is the other exclusive and is also another beautifully-printed minifigure. The gold and red accents really pop off the blue torso and legs. She comes with a blonde hairpiece, which can be swapped out for a helmet with exclusive mohawk attachment.

Both War Machine and Captain Marvel come with a variety of trans-orange flame pieces, which attach to their legs and hands, giving the impression they are flying and firing their weapons. It looks cartoony, over the top, and perfectly in-keeping with the source material.

Also making up the impressive line-up of Avengers are Nick Fury, Black Widow – complete with exquisite arm printing – Iron Man and Thor, all of whom are great variants, but have featured in other sets.

The solitary A.I.M. agent features the same printing that has been common throughout Marvel’s 2020 offerings, but does come with the unique brick-built jet pack.

76153 Avengers Helicarrier is a hard one to judge when it comes to the price. Admittedly, there is a lot packed in here: eight minifigures (if you count M.O.D.O.K.), an additional brick-built jet, an A.I.M. Agent with unique jet pack build and a finished set measuring 37cm would suggest that the price tag of £109.99 seems fair, and there’s undoubtedly a lot of play value to be had from this set. However, the build experience is not the most enjoyable. In this case, it comes down to personal taste – is it the build or the final model that is the most important factor for you?

76153 Avengers Helicarrier does have moments of inspiration during its construction, but it’s a little too simple and comes together a little too quickly. The internal Technic gear system is a pleasing addition and a joy to operate. There are a few interesting building techniques scattered throughout, but nothing to really marvel at (sorry not sorry). While the colour scheme is pleasing to look at, the rest of the model is not the most attractive – but then, this is a set that’s all about play value rather than display.

There are some neat features strewn across the craft, and a stellar line-up of minifigures almost gives fans the entire Avengers line-up in one fell swoop, while the inclusion of M.O.D.O.K. and the A.I.M. Agent means there’s just enough baddies to battle against. Younger fans will no doubt love this and it’s sure to be a set used again and again in fantasy bedroom battles, but there isn’t enough to warrant more mature fans assembling this Avengers offering.