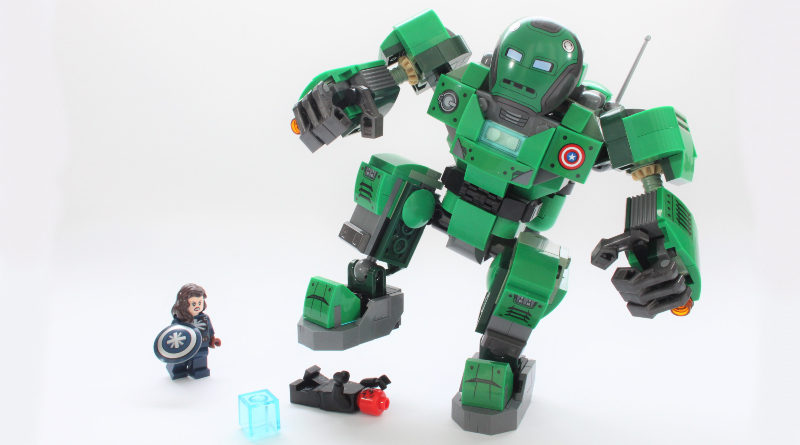 LEGO Marvel is expanding into the multiverse with 76201 Captain Carter & The Hydra Stomper, which introduces alternate-reality versions of beloved characters – but can this parallel-universe model live up to the hype?

What if Steve Rogers was never chosen for the supersoldier serum? That’s the question that the latest superhero set dares to ask, as the Marvel Cinematic Universe dives into parallel versions of iconic stories, with twists on familiar characters – and one making their minifigure debut.

With such an interesting premise, the only question left is: what if 76201 Captain Carter & The Hydra Stomper is the Marvel model we’ve all been waiting for?

At first glance, the shape of 76201 Captain Carter & The Hydra Stomper is one that you’ll likely be familiar with, coming in as another in the long line of LEGO mechs. The Marvel theme is no stranger to these robotic vehicles, with more recent iterations including 76164 Iron Man Hulkbuster versus A.I.M. Agent, 76190 Iron Man: Iron Monger Mayhem and the only other build based on the What If…? series, 76194 Tony Stark’s Sakaarian Iron Man.

While building this set, it’s hard not to recognise that with such an inevitably diverse show (which at the time of writing has not yet debuted, but a trailer is available) that another kind of vehicle or location suitable for a LEGO set could have been chosen. With both 76201 Captain Carter & The Hydra Stomper and 76194 Tony Stark’s Sakaarian Iron Man choosing armoured suits as their main build, comparisons can be drawn between them.

Since this review is only for the former set we won’t dwell on this point much further, though more diversity across these What If…? tie-ins would have been appreciated.

On its own, 76201 Captain Carter & The Hydra Stomper makes for a surprisingly satisfying experience. The colours may seem confusing at first – particularly with a view to that trailer – but the bright green allows the darker minifigures to stand out. One appreciated addition is the attempt to better integrate the poseable pieces into the model, with some Technic elements used in place of ball joints, fitting with the more industrial feel of the armour.

The play features are admittedly few and far between, but those that are present feel well-integrated and not tacked on. For example, the stud shooters use translucent orange pieces as ammunition with a furnace sticker near them, implying that this is some kind of heat-based weaponry – possibly as a reference to the original Iron Man Mark I’s flamethrower?

Speaking of stickers, those that are used on the model feel topical and add a splash of colour and detail to what can otherwise seem like a monotonous build, especially the reference to the classic Captain America shield. Other surprising elements of the model include a single glow-in-the-dark brick, which is inserted as the power core of the Hydra Stomper. The luminescent piece provides a good amount of light when fully charged, and when combined with the set makes for an intimidating silhouette.

One unfortunate aspect of the set comes from the head, which uses a uniquely-printed faceplate to capture the robust details of the robotic likeness. This combined with the rounded tiles creates a satisfying construction that represents the chunky dome of the Hydra Stomper, but one that doesn’t quite fully protect the pilot inside.

When displayed at nearly any side angle, the smiling face of Steve Rogers can be seen in what should otherwise be a solid suit. Additional elements to fill this gap would have been appreciated, but may have interfered with the minifigure placement.

The mech in 76201 Captain Carter & The Hydra Stomper is one reason to buy, but as with many superhero sets, it can’t be denied that the minifigures are the main attraction. The line-up here includes one existing minifigure, one alternate version of a beloved character, and another entirely new minifigure for LEGO Marvel.

The star of the show is undoubtedly Peggy Carter, also known as Captain Carter, or Captain Britain. She appears in the set in a comparatively modern suit, contrasting the debut of the first Avenger Captain America in the Second World War, but one that feels familiar with British emblems mixed in.

The only printing on this minifigure can be found on the torso, with a striking design that stands out amongst the dark blue and black colour scheme. Interestingly, this design differs from the one seen in the recent What If…? trailer, suggesting that this may be some kind of stealthier alternative.

The legs and arms remain unprinted, but it doesn’t feel as if any more is needed to capture the likeness of Captain Carter here. A second face print is also included for when Peggy feels the need to take the fight to Hydra, and she’s equipped with a brand new shield, which sports that same British regalia in place of the silver star from Captain America.

The other new minifigure is a civilian version of Steve Rogers, who’s decked out in pastel green coveralls and a parachute, reflecting both the military regalia and a necessary piece of safety equipment for piloting a jet-powered mech. Red Skull rounds out the trio as a familiar minifigure for builders who own 76166 Avengers Tower Battle, but with the addition of some leg printing from Harry Potter.

The standout feature of Red Skull comes from his accessory in the form of the Tesseract. The LEGO designers have transformed the brick-built space stone from a standard transparent brick to a repurposed Minecraft head, which is inarguably a better shape for the cosmic cube – if a little large.

For £27.99 / $29.99 / €29.99 and 334 pieces, 76201 Captain Carter & The Hydra Stomper has a statistically good value and price-per-part ratio. Thankfully, it feels just as worth it from start to finish, too. While including only one model (unless you count an extra ammunition holster) may not seem like the most admirable of offerings for a set of this price, the size feels exactly right and getting two exclusive minifigures helps increase the merit too.

Compared to other Marvel mech sets – including the other What If…? build, 76194 Tony Stark’s Sakaarian Iron Man – the number of bricks, minifigures and more feels just about right, as the LEGO Group clearly isn’t attempting to push the envelope with this latest creation. There’s not much else to say for the value of 76201 Captain Carter & The Hydra Stomper – you simply get what you pay for.

With a multiverse of possibilities on offer as part of the latest Marvel streaming series, we can’t help but be slightly disappointed that both of the What If…? sets are similarly-priced mechs with three minifigures each. However, it’s also not entirely fair to compare two sets that are based on entirely different eras of the same universe. With that in mind, 76201 Captain Carter & The Hydra Stomper is a good example of a decently-priced Marvel model with a great selection of minifigures on offer.

The smaller details and few references included within the build will be appreciated by even casual Marvel fans, and the inclusion of the first minifigure of Peggy Carter is a standout feature of the set – not to mention her unique (but familiar) shield. The other minifigures are somewhat less interesting, but each contains at least one desirable element, whether it be an alternate version of an iconic character or a must-have accessory.

We’ve yet to see the Hydra Stomper in action other than in the trailers, as What If…? has yet to premiere on Disney+. From what we’ve seen so far, it’s about as accurate as a big green mech could be. If you go into 76201 Captain Carter & The Hydra Stomper expecting something exceptional from LEGO Marvel, you may find yourself disappointed – but if you’re in the market for a decent-sized build with some exclusive minifigures that may not appear again, then this could be just the ticket.

What if… you supported the work that Brick Fanatics does by purchasing your LEGO Marvel sets through one of our affiliate links?

How long does it take to build LEGO Marvel 76201 Captain Carter & The Hydra Stomper?

You might be surprised at how long 76201 Captain Carter & The Hydra Stomper takes to construct, with a build time of around 40 minutes – or maybe longer if you take a moment to admire the exclusive minifigures.

How many pieces are in LEGO Marvel 76201 Captain Carter & The Hydra Stomper?

With a total of 343 bricks in the box, 76201 Captain Carter & The Hydra Stomper represents a decent price-per-piece ratio – and there’s a few interesting elements among the pack, from a reused Minecraft head to a glow-in-the-dark brick.

How big is LEGO Marvel 76201 Captain Carter & The Hydra Stomper?

76201 Captain Carter & The Hydra Stomper measures over 15cm tall, 8cm deep and 14cm wide. It’s the perfect size for a striking display on any shelf, should you wish to put the ‘stomp’ in Hydra Stomper.

How much does LEGO Marvel 76201 Captain Carter & The Hydra Stomper cost?