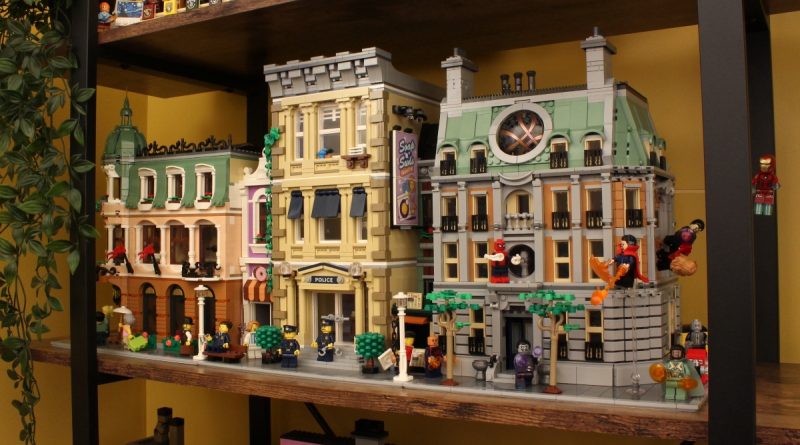 LEGO Marvel 76218 Sanctum Sanctorum is designed to fit seamlessly with the wider Modular Buildings Collection – but how good does it actually look lined up with the currently-available sets?

While the brand new Doctor Strange in the Multiverse of Madness/Avengers: Infinity War set is technically a continuation of the subtheme established by last year’s 76178 Daily Bugle, it actually adapts the template of the LEGO Group’s Creator Expert (now ICONS) modular buildings, like 10270 Bookshop and 10278 Police Station. Split over three separable storeys, the superhero structure even features Technic pins to connect directly to those buildings.

But how well does it actually sit on a shelf with those sets, and is it worth your time if you’re just looking for a new modular building (and care very little about Marvel)? We’ve taken our copy of the set – reviewed here – and lined it up with every modular building currently available at LEGO.com to find out. That list includes 10255 Assembly Square, 10270 Bookshop, 10278 Police Station and this year’s 10297 Boutique Hotel.

Probably the first thing obstacle you’ll meet in connecting 76218 Sanctum Sanctorum to any of those buildings is in its three removable and configurable panels, each of which adds character and depth to the New York City building – whether through a Bricksonian Museum billboard or a portal for Gargantos to peek through. All of them protrude beyond the flat outer walls of the building, so you’re going to need to flip one of them round to make it sit flush with another modular.

All three of them are arguably capable of this to some degree, though it will take a bit of extra work to make Gargantos’s protruding tentacles sit comfortably inside the building. For the purposes of this shoot, we flipped the Captain America billboard round instead, offering a complete wall with minimal interference to the Sanctum’s interior.

The second sticking point is one that’s easily fixed, but also fine to leave as is: the lamppost in 76218 Sanctum Sanctorum is black, where the lampposts in every Modular Buildings Collection set are white. You could swap out the Sanctum’s black post for white, but it’s not a dealbreaker – after all, real-life lampposts aren’t necessarily all the same colour.

Finally, arguably the biggest issue comes as a result of 76218 Sanctum Sanctorum’s relatively meagre footprint. The building only extends to the farthest edge of its 32×32 baseplate on one side, which means you’re probably going to want to place it to the right of other sets (as you look at them). It’s absolutely possible to place it the other way, as the images on this page demonstrate, but you’re going to be left with a gap from the corner building’s studded back alley.

That means your best bet for lining up with 76218 Sanctum Sanctorum with the rest of your modular buildings is at the end of a single shelf (or street), and in that capacity it looks really very good. The architecture – while being based on a real-life building to a greater extent than any other in the theme – fits in nicely with the aesthetic of its contemporaries, and it scales well with them, too.

You may not want to situate it directly next door to 10297 Boutique Hotel, if only for the sake of separating their similar colour schemes, but it works very well next to 10270 Bookshop, 10278 Police Station and even 10255 Assembly Square, 2017’s 10th-anniversary modular building that’s still going strong at LEGO.com.

And even if you’re not a Marvel fan, we reckon it’s worth grabbing 76218 Sanctum Sanctorum: you can strip away the more unusual details, like the large circular window on the top floor, with only a little modification and spare bricks; and almost all of the decorated elements use stickers rather than prints, so you can leave those off where necessary to make it fit into your city. Plus, you’ll likely recoup a good chunk of the cost of the set by selling the minifigures on.