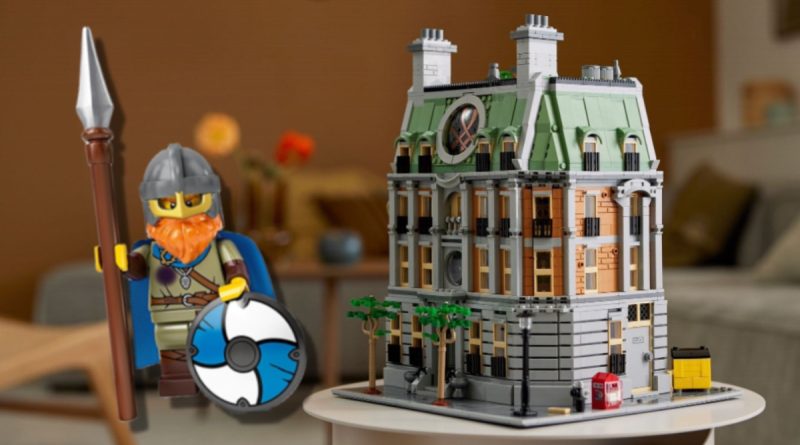 Next month’s LEGO Marvel 76218 Sanctum Sanctorum will appeal to superhero buffs, modular building collectors, and – as it turns out – LEGO Vikings fans.

That’s because the 2,708-piece set includes an element that really should have been in this summer’s 31132 Viking Ship and the Midgard Serpent, and which looks sure to become an incredibly collectible piece on the aftermarket. We’re talking about the pearl dark grey version of the Viking helmet originally created for 71027 Series 20, which can be seen on display in the Sanctum’s top floor.

The original dark grey version of the helmet is already pretty rare on BrickLink, where only five stores have it in stock at the moment (starting at £11.65 for a single piece). The complete minifigure has similarly shot up in price, now starting at £15 without any of its accessories. It speaks to a desire among the community for more accurate Viking minifigures, which will be improved even further by the pearl dark grey helmet in 76218 Sanctum Sanctorum.

You can bet that that piece will likely cost a considerable amount on the aftermarket, then – especially if it doesn’t wind up on the LEGO Group’s online Pick a Brick service – but its existence also begs the question: why didn’t we get it in 31132 Viking Ship and the Midgard Serpent? The Creator 3-in-1 set reimagines a classic LEGO Vikings set, resurrecting that retro theme in much the same way 31109 Pirate Ship and 31120 Medieval Castle have done for Pirates and Castle respectively.

Its four minifigures (hardly enough to man a ship that size) sport two helmets between them: the original 2005 horned helmet, and a brand new piece that combines a smaller helm with hair. While the throwback to the classic Vikings theme is appreciated, an accurate pearl dark grey helmet would have been even more welcome – and now that we know it exists, it’s pretty frustrating that it wasn’t included in 31132 Viking Ship and the Midgard Serpent.

You can see why it wasn’t: this colourful Viking ship is obviously leaning more closely into fantasy than reality, but the LEGO Group could have thrown adult fans a bone, too. Instead, we’ll have to liberate the pearl dark grey helmet from 76218 Sanctum Sanctorum for a more realistic Viking, and hope that it one day becomes easier to acquire in bulk – whether through Pick a Brick, a Collectible Minifigures series or a future wave of Vikings sets.