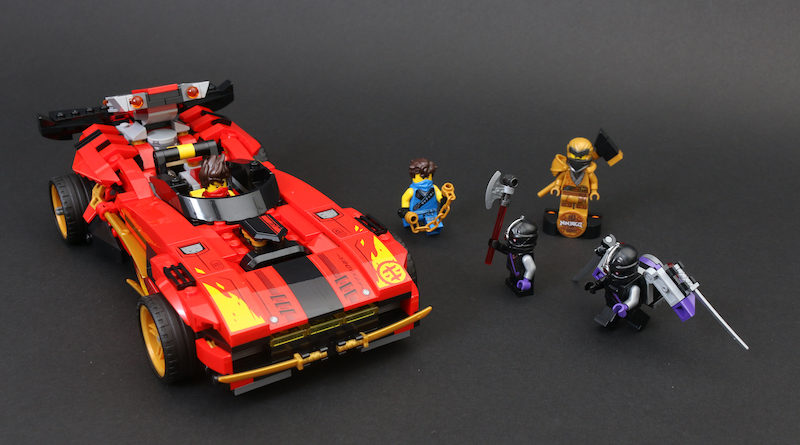 Such is the upgrade that the NINJAGO design team is applying in techniques, parts availability and imagination, calling any set from the Legacy line a simple remake is perhaps a disservice. Whilst 71737 X-1 Ninja Charger does come in as a new version of 2014’s 70727 X-1 Ninja Charger, the seven years between the two sets effectively makes them completely incomparable.

The answer is a completely new design. The difference can most obviously be seen in the overall shaping and styling of the car: the previously-exposed rear engine is instead pushed underneath a dual flick-fire missile launcher, whilst the cockpit has been pushed further back and the bodywork generally smoothed out and beefed up. It makes for an almost entirely new version of the car, even while bearing similar design points to the original.

Kai’s bike that shoots out of the front of the car has also been given a smoothing over in design for a more aesthetically-pleasing finish.

Makeover to one side, though, and essentially the set remains the same, based around the singular function of the bike sitting in the middle of the car and being able to be shot out the front. We say shot out – the furthest we could get it to push out unassisted was a few centimetres.

It’s still a pretty fun mechanism, but it’s one that ultimately dominates the design of the larger vehicle. It’s there as a shell with four wheels and is largely redundant once Kai jettisons out the front. Whilst the bike is inside there are two practical issues with the model – a strong amount of resistance on a smooth surface when driving the car along, and Kai’s almost comically-poor visibility from inside what becomes a massive cockpit.

Part of the additional value to be found in 2021’s 71737 X-1 Ninja Charger compared with 2014’s 70727 X-1 Ninja Charger is in the minifigure line-up. Seven years ago, this vehicle came with Kai and two Nindroid Warriors, whereas the 2021 version adds minifigures for Jay and Legacy Cole.

It’s the right selection of characters, all nicely updated with 2021 versions of their outfits, and as a line-up it adds a greater element of value to the entire set.

Ultimately, though, where the value is to be had in 71737 X-1 Ninja Charger is very much in how enjoyable you may find the 2-in-1 nature of the model and the play function that separates the one into two. It’s a juniorised set and for that it has a few design compromises, meaning that for beyond what the set can do (which isn’t a lot), it’s not got a lot of wider appeal for most NINJAGO fans. At £44.99 / $49.99 / €49.99, it’s the worst value to be had across the 2021 NINJAGO Legacy line, and that’s in comparison to a selection of sets that otherwise offer great value.

Part of NINJAGO’s long-lasting appeal through this last decade has been in its variety of models, from dragons and fortresses to fighter jets, helicopters and cars. There are so many entry points into NINJAGO for those with any number of interests. 71737 X-1 Ninja Charger certainly ticks a number of boxes for a particular niche within NINJAGO, but not enough to really justify getting the Legacy upgrade.

A brief look through Kai’s vehicles from recent years will demonstrate that the LEGO Group took a while to really perfect the right balance between style and substance. Revisiting a set from six years ago that didn’t quite get that balance right was a risk, and one that ultimately – when priced at £44.99 – hasn’t paid off for fans.

LEGO NINJAGO Legacy 71737 X-1 Ninja Charger is available at LEGO.com from January 1, 2021 – support the work that Brick Fanatics does by purchasing your LEGO through one of our affiliate links.