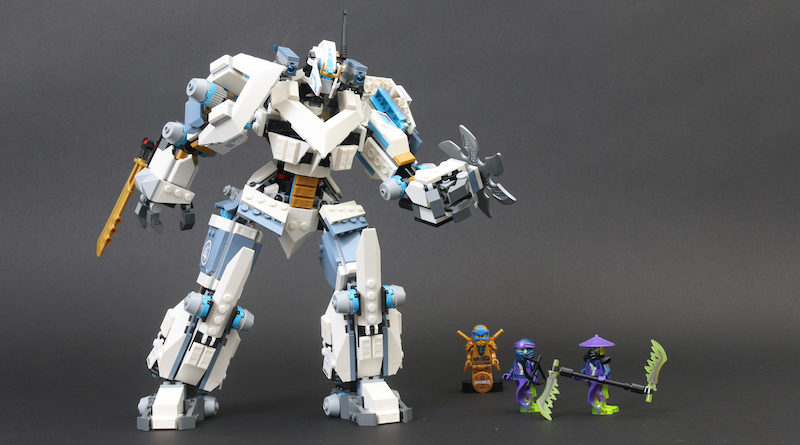 71738 Zane’s Titan Mech Battle both modernises and expands on an already well-designed and large NINJAGO mech to great effect.

The NINJAGO design team are leaning more and more into the Legacy line since introducing it as part of the January 2019 wave of releases, and for good reason – it’s a simple and effective idea. It’s similar to CITY and Friends’ approach of viewing its main audience as enjoying a two-year cycle before moving on to other themes (and so a new audience coming into the theme at the end of that, wanting the same sets as before), but like Star Wars, it is taking the opportunity to revisit what’s been previously done with fresh eyes and new design techniques and standards.

71738 Zane’s Titan Mech Battle is a great example of this process working, giving new and existing NINJAGO fans the opportunity to revisit a set that appeared in the television series back in Season 5 – and was originally released in 2015 as 70737 Titan Mech Battle – through an impressively upgraded version of Zane’s white mech.

Now, the first thing to note with the NINJAGO design team’s decision to revisit Zane’s Titan Mech from 70737 Titan Mech Battle for 2021’s 71738 Zane’s Titan Mech is that, in the white mech requiring a larger piece count (840) than that of the entirety of 70737 (754), there is no Mech-enstein equivalent included. And that is a shame, given how part of the long-lasting appeal of the 2015 set was in having this pair of mechs of equal size able to be pitted against each other.

It’s equally a shame for how brilliant Mech-enstein was as a LEGO model, and where an increased piece count on that four-armed dark-blue-and-black beauty would have taken things creatively. Perhaps something is around the corner, maybe big enough to match 71738 Zane’s Titan Mech here, or perhaps something smaller, as with 9448 Samurai Mech downsizing to 70665 The Samurai Mech.

For such downsides that 71738 feels like it is up against – just one mech instead of two, and it’s not the four-armed one –  there are upsides, thanks to what 71738 does create, which is a far larger and more rounded-out Titan Mech. The original Titan Mech was a cute build with good articulation and great playability, but without the more dynamic Mech-enstein to face off against, it was a little dull.

Importantly, then, 71738 Zane’s Titan Mech is a far more interesting mech, beginning with its size and scale. It is taller, chunkier, meaner-looking and – remarkably for all this – better articulated than the original version. Yes, with the likes of 70676 Lloyd’s Titan Mech in mind, it even has knees of some sort. Indeed, mid-leg joints aside, for all the angles and for how the colours here are cleverly integrated underneath a predominantly white outer shell, 70676 stylistically seems the closest match to what we have in 71738.

But 71738 Zane’s Titan Mech also comes with knees. As silly as it sounds to focus on such a thing, they open up a whole range of additional poses – and with a mech, posing is all that matters. From the angles it can hold and the space it can take up, to the lows it can stoop to and the actions it can make, everything is opened up through more articulation. And in 71738’s case, it compares favourably with recent larger-sized mechs.

This additional range of articulation at a scale of build that may otherwise not be able to offer it is thanks to a smart build solution that manages the knee bend through a firm but smooth Mixel joint build. For anyone who has built a previous LEGO mech, it’s the most obvious area of advancement across what should be said is also a smart build all round.

The extra attention that has gone into the pieces chosen for the mech’s bodywork really helps to give 71738 Zane’s Titan Mech a clear visual identity and style – separate not only from the version that appeared in 70737 Titan Mech Battle, but from most other mechs that have come before. In a world of many awesome LEGO mechs, that’s quite something.

You may have felt like the NINJAGO Legacy line picked the wrong mech to embiggen here, but you’ll only have eyes for 70737 Titan Mech Battle once it’s built.

There is a certain point in a LEGO set’s scale and size where any minifigures included with it will play second fiddle, and 71738 Zane’s Titan Mech very much pulls focus away from its line-up of characters included. The character, playability and action is packed into the giant mech in front of you, allowing the minifigures to merely play a supporting cast.

That’s not to discredit their design, which revisits the Ghost Warriors of Season 5 of the NINJAGO television show with Ghoultar (who appeared in 70737 Titan Mech Battle) and Soul Archer. The line-up also includes a Deepstone Zane and a Legacy Jay, as part of the 10th Anniversary collection of golden ninja minifigures scattered across the January 2021 NINJAGO Legacy sets.

Zane’s design in particular is sharp and at once both contrasts and complements his mech as he sits within it.

As mentioned, 71738 Zane’s Titan Mech is so well put together it’s almost over-designed. The intricate nature of the bodywork, the clever parts usage throughout and an ingenious build solution for the knees are all factors that by themselves would be enough to make this set worthy of its price and of adding to the NINJAGO collection.

That all three are caught so wonderfully within the one model is testament to an intuitive and specialised design that really makes 71738 the standout set from the January 2021 NINJAGO Legacy line-up.

This mech may have existed in a previous form before, but six years on in 71738 Zane’s Titan Mech, it is given a new, much more interesting identity, incomparable to the previous version. 71738 Zane’s Titan Mech is a set that demonstrates the true capacity of the Legacy range to not only revisit classic sets from NINJAGO’s now 10-year history, but also breathe new life into them.

LEGO NINJAGO Legacy 71738 Zane’s Titan Mech is available at LEGO.com from January 1, 2021 – support the work that Brick Fanatics does by purchasing your LEGO through one of our affiliate links.