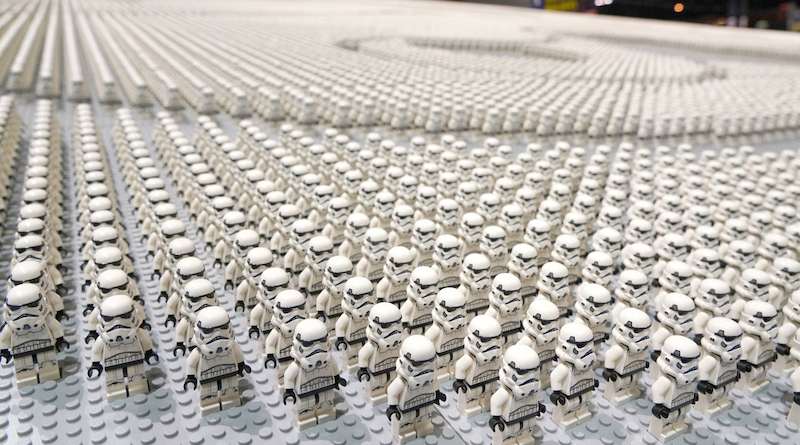 The LEGO Group has well and truly invaded Star Wars Celebration Chicago, with a world record number of stormtrooper minifigures.

As StarWars.com report, whilst Creative Director of LEGO Star Wars, Jens Kronvold Frederiksen, placed the final minifigure in position and senior director of brand relations at LEGO, Michael McNally, collected the certification from Guinness World Records adjudicator, Christina Flounders Colon, it actually took 12 LEGO employees a total of 38 hours to put together. That even includes 16 hours that it took the unlucky dozen to just put together each minifigure in the same way that they come in sets.

“We really wanted to something that would be memorable,” McNally tells StarWars.com, without comment on the state of his employees’ fingertips. “A lot of times we build really large things with our master builders, so we thought that we might change it up this time and go small scale, and really focus on the minifigure.

“The minifigures have really become one of the most iconic parts of LEGO Star Wars over the years. There have been over a thousand different versions of Star Wars minifigures, so we thought it was great way to mark the milestone.”

The achievement, which broke an 11-year record set by LEGO UK using clone troopers – as Colon told Beyond the Brick – is on display at the LEGO booth during the four-day Star Wars Celebration event in Chicago. Go and check it out if you can, and try and work out for yourself what will become of those 36,440 stormtrooper minifigures afterwards.