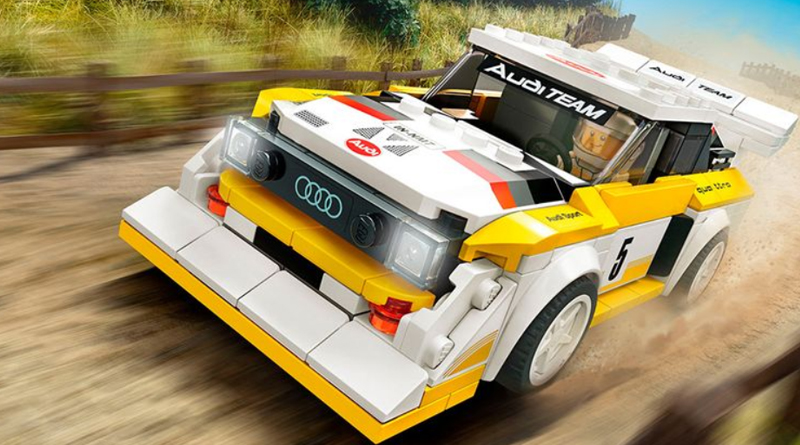 With the decision to switch to eight-wide cars, the LEGO Speed Champions team had to design new elements to realise their vision

LEGO Speed Champions has made a big change in 2020, offering cars in an eight stud wide format for the first time. It allows more detail and better proportions, using new elements to make the new scale work.

In the second part of an exclusive interview with Brick Fanatics, LEGO Speed Champions Design Lead Chris Stamp talked about the new cars that are introduced in the 2020 range. He continues to offer an in-depth look at the LEGO development process, demonstrating how the new eight stud wide format allows the design team to have the cars be in scale.

Are there any concepts that you could only realise in eight wide?

The Audi Quattro is a good one, because you can do that one at six wide but it looked really, really long. No matter what you did it looked long and you can only shrink it down so much because with the six wide the biggest challenge is the size of the minifigure. These cars need to be as small as possible because they are supercars, which is contradictory the fact we are making them bigger.

At the same time they need to look like what they look like, otherwise we are just putting a logo or a brand on something and calling it something else. That is why they are always the same height, we can’t really go lower than that and then what we have done now is really trying to dial up that authenticity. These ones are actually slightly taller than the previous ones, just due to the overall scale of the vehicle.

If you flip these two, you can clearly see a difference in scale. We have always tried to build all of the Speed Champions cars in scale with each other. Now this is going to give you the opportunity to see that more clearly. With the eight wide now we are at a point where every car can be a very different build experience. You are going to have similarities, you are going to have the same chassis primarily, you are going to have four wheel arches primarily, some of the cars might not they might only have two, they might have similar cockpits, but the builds are all drastically different. That is the way we have approached it. How can we offer different building experiences for different cars?

That is one of the reasons we have built the chassis the way that we have, so whether it is a car with a six stud wheel base or an eight stud wheel base in the middle, you can still build from one plate because you can extend it and add brackets or you can shrink it, whether it is going to be really flat on the ground because it needs to be super low and the sides are low or whether it needs to be quite high because it is an old car and you need to build underneath it.

How long did it take to figure out what the new elements need to be?

To get certain details, we spend a lot of time, I think we went through 22 versions of the chassis, all different types; what if the side had eight studs on the side? What if it was actually three studs tall on each side so you could only side build? That is limiting, because what if you wanted to do some stacking? With the Jaguar, we have actually got a stacked line built through that, you couldn’t do that if it was all plain studs on the side. What if I need the bottom to be side built, but this part I don’t, because I actually need all of this section to be built and then put in at an angle? It’s those kind of questions we have asked when we have been approaching the element design.

Just this one cockpit – I call them cockpits because I used to work on Galaxy Squad – this windshield, we had so many conversations about whether it should be six modules long or five modules long. Should it be just two studs which follows the existing design or should it be the four studs you see here, should it one row of one by six so it is six studs that way with nothing here and here? We have all of these conversations because Speed Champions has a lot of these basic reusable elements. Okay, it might be designed for this Ferrari or Formula E but in two years it is going to be used as a chandelier or an air vent in a Creator Expert or a Star Warsa model. It is those kind of things, you need to think two years down the line.

One thought on “LEGO Speed Champions: Upgrading the scale”