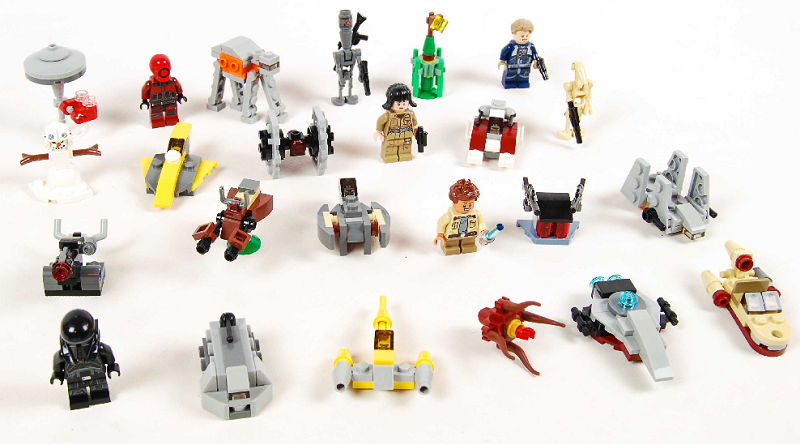 LEGO Star Wars Advent Calendars have been both hit and miss in recent years. Now that the big day has arrived, Brick Fanatics looks back over the 24 windows of 2018’s 75213 Advent Calendar to find out whether it hits the target

I have always suspected that the LEGO Group’s advent calendars, and the Star Wars version in particular, have a somewhat more sinister purpose than the holiday cheer they purport to bring. Having now opened every window for this year’s set, 75213, I am more convinced than ever that I am right. Advent calendars are part dumps; ways for the LEGO Group to offload figures produced for sets that underperformed, specifically the minifigures. This is only conjecture – these may be pure exercises in design, they may be marketing tools, they may be a mixture – but there may be a case for this conjecture.

Parts can be re-purposed to other products, but minifigures, especially those of licensed sets like Star Wars, may not be needed again for years. That is way too long to store inventory, so in a last ditch bid to cut losses, perhaps these overproduced minifigures are packaged as advent calendars. Thanks to this suspicion, as well as some of the other subject matters selected for inclusion this year, LEGO Star Wars 75213 Advent Calendar is weak at best. 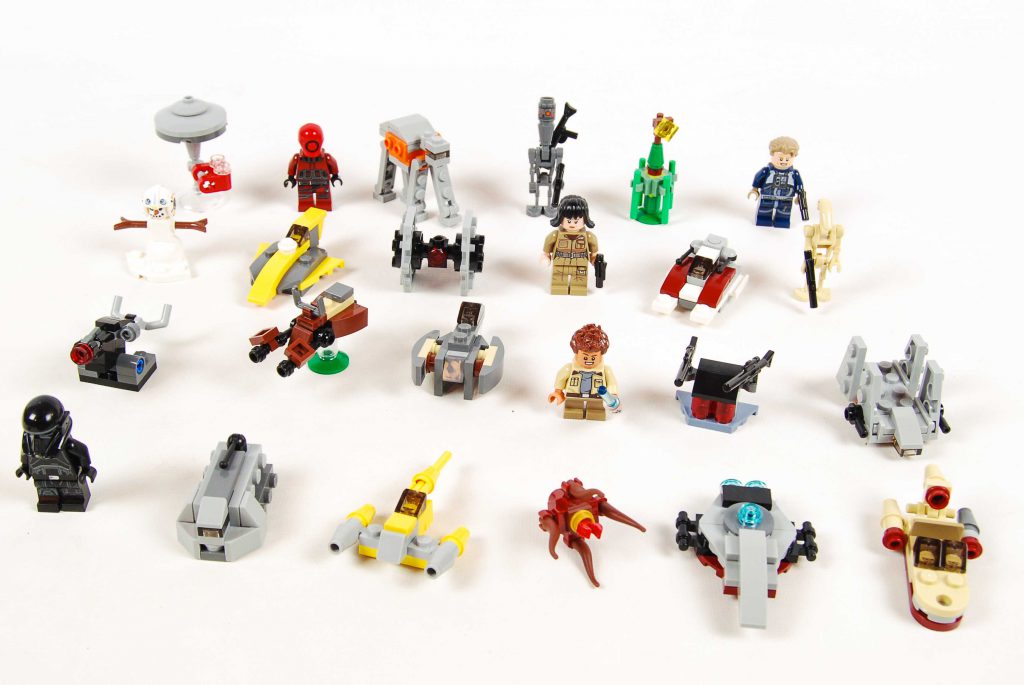 As usual there are three categories of models included – figures, miniature versions of vehicles, and ‘other’, comprising of a collection of random subjects that are sometimes meant as accessories to the figures, sometimes not. The ‘other’ category contains the fewest items this year, with only four to its name. Weapons racks are a Star Wars advent calendar tradition and this year’s includes two full size blaster rifles which is nice. The holiday themed Moisture Vaporator Christmas Tree topper is the only overtly seasonal model this year with the exception of the ultimate model. A Rathtar makes its first appearance in micro-scale, with a mounted cannon rounding out the group.

Again, not breaking with tradition, the figure category is the second largest with a total of eight figures. Here again it feels like we got short changed as two of them are droids, including IG-88 who could be had in one of the year’s cheapest – and best value – sets. In that same vein, nobody seems to have been clamouring to get their hands on Rowan Freemaker considering how quickly those sets went on sale at every outlet. There have been too many types of new troopers lately to really do army building like back in the early days of the Star Wars advent calendars, so the Death Trooper and Guavian Security Guard, while cool and detailed in their own right, are limited in their usefulness.

I had not yet gotten a copy of Rose, so her inclusion was the highlight of the calendar for me. The problem with this calendar is, however, epitomised in the remaining two minifigures. The first is Antoc Merrick. I didn’t know who he was either. Apparently he is one of the commanders in the battle of Scarif leading Blue Squadron. As best as I can tell, this is technically his first official appearance in minifigure form, but he is so generic that he looks like any other Alliance pilot.

He has graciously donated his helmet to the final figure to be revealed behind door 24. Until last year, this slot had always been reserved for an exclusive holiday figure dressed like Santa. Yoda, Darth Maul and Chewbacca have all lent their personas to the role. Last year the LEGO Group phoned it in by just slapping a Santa had on BB-8, but this year takes the cake as the most disappointing yet. Behind the door is a snowman wearing Antoc’s helmet. Snowmen are staples of every advent calendar, but have never been the final window. This completely undermines the main purpose in getting the Star Wars calendar for AFOLs, and will not exactly delight children as it should.

Finally there are the miniature models. As usual they are a mix of subjects that translate well into micro-scale form, like Luke’s Landspeeder and (surprisingly) Cloud City. There are those that are passable such as the First Order TIE Fighter and the Speeder Bike, and then those that are pretty rough including two I can’t identify and the AT-ACT Walker. As always, my question with these is what do you do with them? Was anybody really clamoring for a miniature version of the Arrowhead from the Freemakers? Hardly anyone wanted the full scale one. I always liquidate these for parts and in that capacity there are a few winners this year, especially for dark red and wedge type pieces.

Last year, the LEGO Star Wars Advent Calendar took a dip in quality and this year not only continued that downward trend but steepened the angle of descent. I recognise that adults are not the target audiences for these models, but even my children were a little bored by it this year. None of the figures excited them and they were disappointed to not see a more exciting final figure. The finale is the most important part of these advent calendars – let’s hope the LEGO Group remembers that next year.

75213 Advent Calendar is available now at shop.lego.com. You can help support Brick Fanatics’ work by using our affiliate links.