One of the most pivotal scenes in Star Wars: The Last Jedi gets a LEGO release, allowing fans to recreate the battle between dark and light

In one of the most gripping scenes in Star Wars: The Last Jedi, Kylo Ren betrays Supreme Leader Snoke, cutting him in two by using the Force to control Rey’s lightsaber. The would-be Jedi and Knight of Ren then have to duel all six of the Praetorian Guards, resulting in a huge battle that quickly turns the throne room into chaos. The scene is reminiscent of Luke’s showdown with Darth Vader aboard the Death Star II, and 75216 Snoke’s Throne Room is therefore somewhat similar to 75093 Death Star Final Duel. 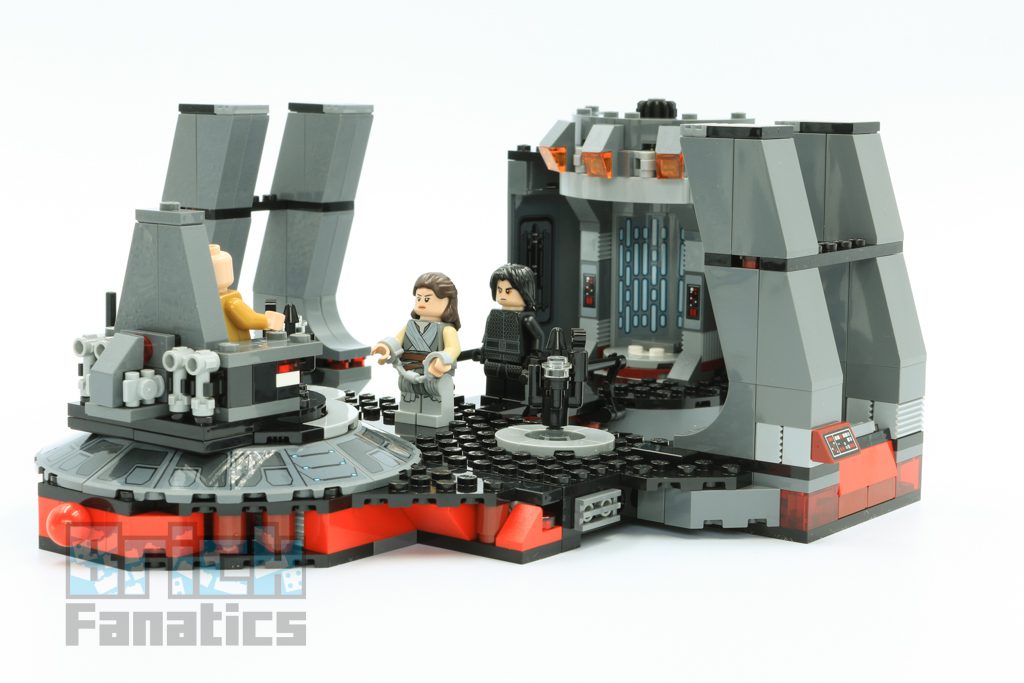 This is a modular build split into three different stages. In the first part two key elements are built including the pedestal for the throne and the ‘oculus’ that Rey is forced to look through by Snoke. This is too small to be in scale with a minifigure but using only a few parts and a star-scape sticker captures the essence of it nicely.

The next aspect is building the lift that enters the throne room, and here the designers have had to take some artistic license. In the film the lift can fit two, but the LEGO version can only fit a single minifigure – so while Rey goes up Kylo will just have to wait his turn (cue temper tantrum). The elevator’s interior lighting detail is the ultimate bane for sticker haters as two labels have to be applied to the inside curve of the pieces which is frustratingly fiddly.

Surprisingly, the set has relatively few functions and some, like the secret compartments, have been added for almost no obvious reason. The best of these features is a tile Rey can be placed on that can be pulled towards Snoke’s throne, mimicking her being Force-dragged by the ruthless Supreme Leader.

Snoke’s throne itself is a great shape, although it could have been slightly taller so to be more menacing, but it incorporates a lot of hidden detail, such as the red and blue lights on either side that are achieved through transparent-coloured plates. Amazingly this detail even continues onto the back of the throne which is something so far unseen, even see in the movie.

The final step is the slightly repetitive process of building the two exterior columns that suggest the outer walls of the room. These attach by Technic pins so can be swapped around or repositioned, allowing for different display angles or to make the set bigger by buying multiple copies. Indeed, after the model is finished you may stare at it for a while wondering where the rest of the parts are. Out of its 492 pieces most of them are small, adding to the set’s detail rather than size, and this leaves the set feeling quite empty.

The greatest flaw in this model is its lack of red. In the film Snoke’s throne room is blazingly bright scarlet, but 75216 contains only a smattering of red bricks at its base and there’s no suggestion of the surrounding red backdrop. This would not have been hard to achieve and the omission is puzzling, as it really is an integral part of the movie set design.

A redeeming factor in 75216 Snoke’s Throne Room is the minifigures. It is currently the cheapest way to acquire Supreme Leader Snoke, who is gruesomely accurate, and the best part is that because a minifigure splits into two you can re-create his demise easily. Neither Kylo Ren nor Rey are exclusive and it is about time Rey had an updated face with an angry expression – after all, she is fighting for her life in the throne room.

The most appealing aspect of this set are the Elite Praetorian Guards. Sporting new shoulder pad pieces and uniquely moulded helmets, plus printing on the front and back, they are at the top end of the minifigure quality chart. Snoke is not particularly well guarded, as only two out of the six Praetorians have been included, and it would have been nice to see the other helmet variations – but this is a good start, and a future Battle Pack could remedy the omission.

Considering that this set represents what is probably the most memorable, or at least second most memorable, scene from The Last Jedi, it is lacklustre in design and execution. As a complete set, 75216 Snoke’s Throne Room is a wallet-stretching disappointment that rather than capturing the movie magic, offers another slab of grey.

75216 Snoke’s Throne Room is available now at shop.LEGO.com. You can help support Brick Fanatics’ work by using our affiliate links.