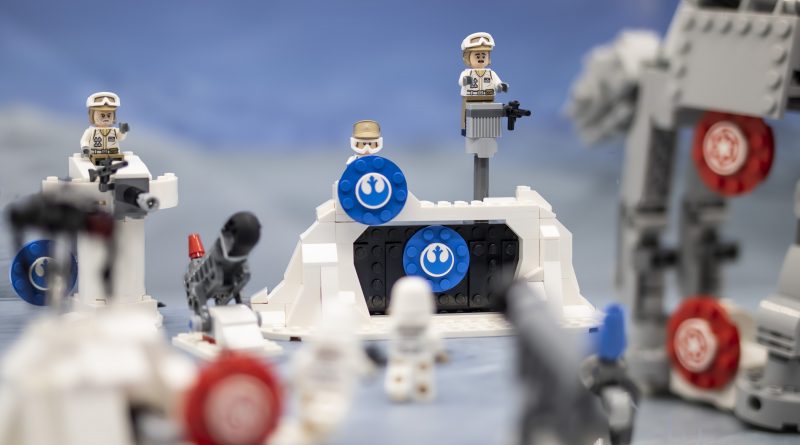 LEGO Star Wars 75241 Action Battle Echo Base Defence offers the biggest battle experience, but does that make it the most fun?

75241 Action Battle Echo Base Defence gives fans the chance to recreate their own epic LEGO Star Wars battles on Hoth, with all of the key components from The Empire Strikes Back sequence – a buildable AT-AT Walker, Probe Droid, a Laser Turret and the Echo Base main door structure. To populate the battle, the set includes three Rebel Troopers and two Snowtroopers. 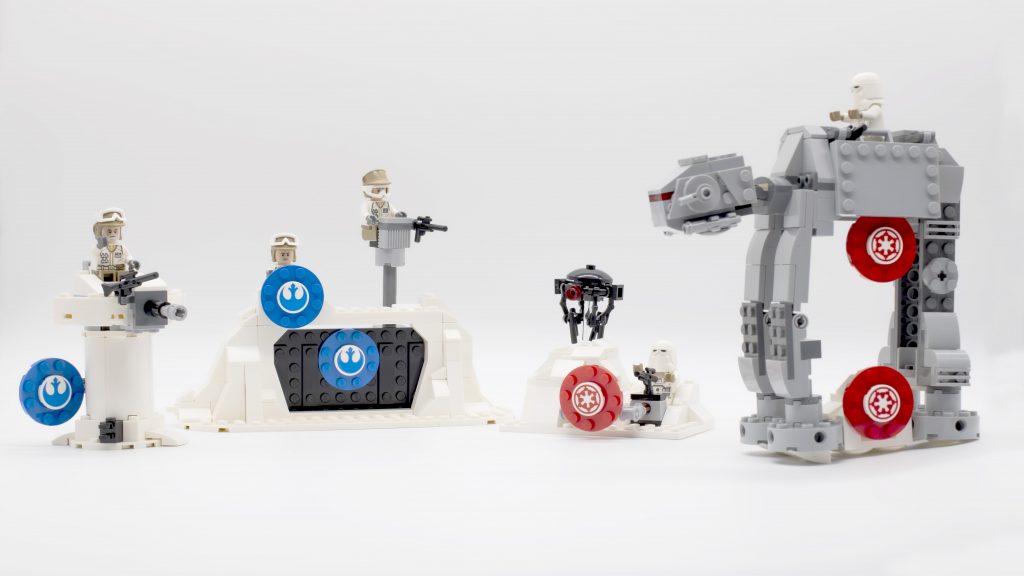 As with all of the Action Battle sets, the main buildable elements are scaled down but still instantly recognisable. Out of the three sets currently on release, this is easily the most accurate to the source material with both the AT-AT and Echo Base doorway looking spot on. Not only that, but the targeting play features and overall building experience is the most enjoyable. Even the canons themselves feel meatier, thanks to each being built into its own base, allowing for the ability to alter the pitch, giving even more range.

There are four buildable elements to construct. The snowy outcrop, which the Imperial Probe Droid sits atop, is a fairly simple structure to put together but there’s always something quite satisfying about using LEGO pieces to build natural looking terrain. A good use of 1×2, 1x2x2 and 2x2x2 slopes help create a decent shape and 1×1 slopes finish the look. A small area to the left allows a Snowtrooper to sit while manning a large blaster rifle.

Despite the apparent simplicity of the build there are some Technic elements that make up the targets and they require a little more skill to put together. The mechanism is really well hidden and when it is hit, it sends both the probe droid and Snowtrooper flying at the same time.

The Rebel laser turret is another quick build but uses quite a nice SNOT (studs not on top) technique with 2×2 brackets forming the laser’s canon at the front. Like all of the set it is not to scale but still looks very accurate. The target here has a hinge like mechanism that once hit will cause the Rebel Trooper to come flying off the front. The laser turret can either be used as an element on its own or attached to Echo Base to form a larger base for the Empire to attack.

Constructing Echo Base itself is a very enjoyable experience. Once again a variety of slopes are used to create the terrain around the doors, which looks very effective and yet again another example of a massively scaled down build that is instantly recognisable.

There are two command posts built around the doors, both of which have targets connected to them. Hitting the target on the main door will collapse the taller of the two while hitting the second target sends the seated trooper flying.

Finally, the AT-AT is the most involved build of the set. Spread across two bags, it is significantly shrunk down but is perfectly in scale with the rest of the builds and is a really smart design.

The head is only 5×2 long but is packed full of details. The red visor of the cockpit, two side guns and laser canons are all included and the 2×2 wedge plates add some nice texture and shaping to the whole sub assembly. It can also be tilted up or down giving some nice display possibilities.

The best feature however is the design of the front legs. There is a small target in between  the walker’s legs that forces the front of the AT-AT to collapse, exactly as it does on screen when taken down by the Rebel Snowspeeders. It works so well it is probably the cleverest designed action feature in any of the Action Battle sets. It is fun, satisfying and completely accurate to the source material.

Once everything is built and set up you can see that there really is there’s a lot included within the set. It is an immense joy getting friends over to set up large scale battles against one another and ‘smash up’ everything you have just built – not something that is often the case when it comes to LEGO builds.

To populate the battlefield there are a generous five minifigures included plus the Probe Droid. The three Rebel Troopers all wear the same uniform, which is new for 2019 and beautifully printed, but have three unique faces. A grizzled general, who shares the same face as Admiral Ematt from the 75202 Defence of Crait. The Snowtroopers are both new for 2019 andthe design is absolutely exquisite.

Fans of The Empire Strikes Back and the LEGO Star Wars theme will love building the pared down versions of such iconic weapons, droids and vehicles. While fans who love to play with their LEGO sets will get hours and hours of fun from this, especially if it is combined with the 75239 Hoth Generator Attack (review). Striking the AT-AT target and watching it fall to its knees never gets old.

The Action Battle sets will not be to everyone’s tastes and the higher price tag of this particular set might put some people off, but those looking for a set that will guarantee a smile should seriously consider 75241 Action Battle Echo Base Defence.

75241 Action Battle Echo Base Defence is available now at shop.lego.com. You can help support Brick Fanatics’ work by using our affiliate links. 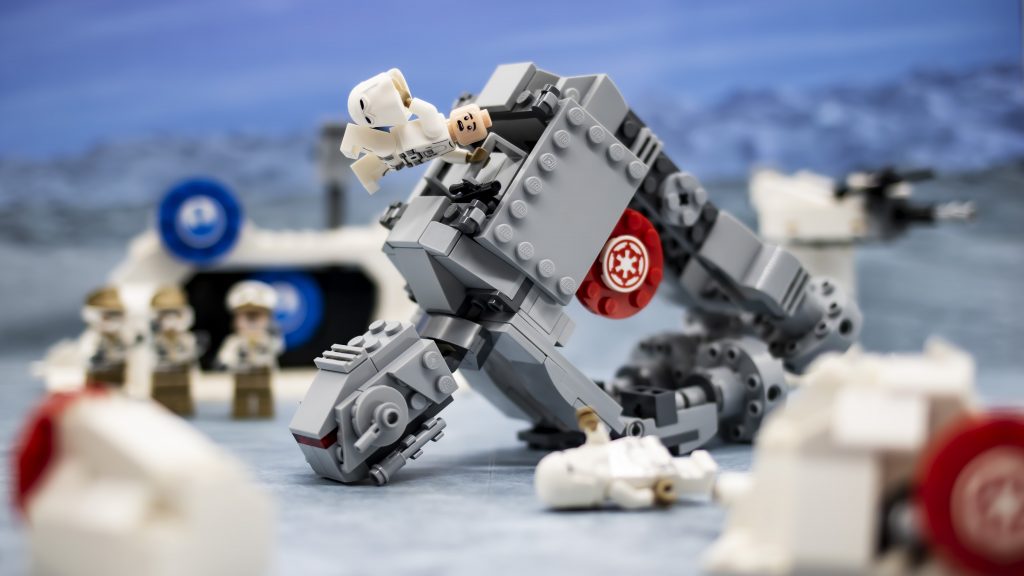