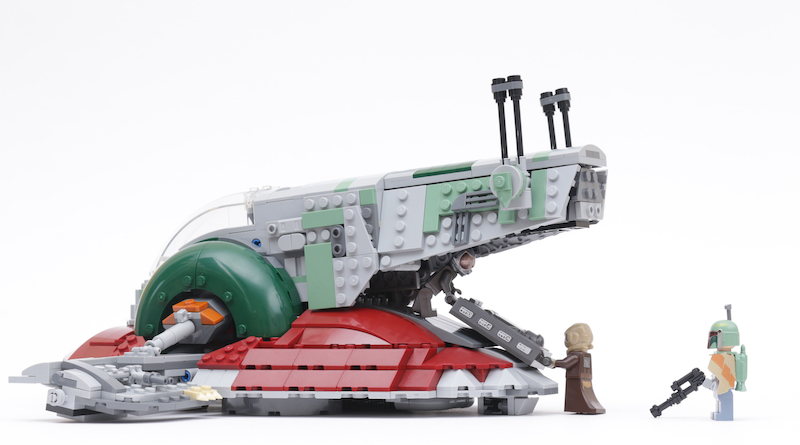 75243 Slave I – 20th Anniversary Edition can best be considered a mini UCS LEGO set, for the detail and construction that’s packed into this rendition of Boba Fett’s iconic ship.

Perhaps like none of the other 20th Anniversary Edition releases, 75243 Slave I – 20th Anniversary Edition takes a familiar build and elevates it to a new level of design. This fifth System-scale version of Slave I is not only a credible upgrade to what has come before for Boba Fett, but a notable step up in design ingenuity across the LEGO Star Wars line. 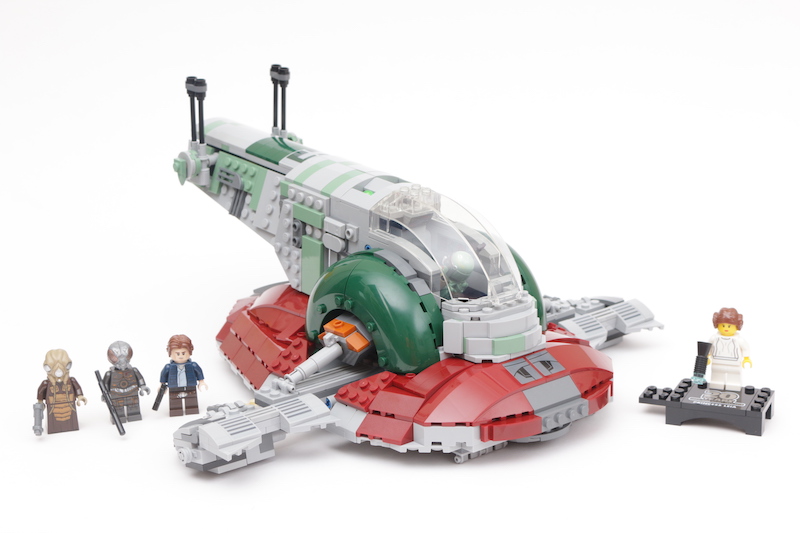 It feels not that long ago that Boba Fett’s Slave I was doing the LEGO review rounds, and in many ways it wasn’t. There was the diminutive version that appeared in last year’s 75222 Betrayal at Cloud City, and just three years before that was a healthy shelf run for 75060 UCS Slave I. But, for considerations of scale, it’s really been a full nine years since a System release of Slave I has been available, with 2010’s 8097 Slave I, priced at £81.99 and consisting of 573 pieces. Why mention that set and its particulars? Well, £82 in 2010 adjusted for inflation to 2019 is £104. For £6 above that, in 2019 we’re getting basically double the bricks.

It’s worth a cursory glance through the back catalogue of Slave Is too, to see just how far design has come – both since 2010, and since the 2015 UCS version. This latest Slave I advances greatly from the former, and borrows particularly design points from the latter, expertly achieved at approximately half the scale.

75243 Slave I – 20th Anniversary Edition impresses in its construction, and not just in the way we have come to expect LEGO Star Wars sets of late to. Much like other expert builds of late, it does indeed offer that now expected attention to detail, well contoured finish and clever part usage. But it takes how all that is achieved to new, rather complex levels, thanks to a design that utlises so many of the 1007 pieces in unexpected ways that, truthfully, will confound as much as delight. Even after building sections to Slave I, following the instructions and taking time and care to take in the process, afterwards you’ll still be left wondering how everything in your hands came together.

There are elements to putting this LEGO Slave I set together of component building. The main shell to the ship is constructed in two parts, which includes a rather hollow-feeling main body, before side pods, panels, wings and various contouring are slowly added separately. How those latter components are all connected to the main build is where what otherwise seems like a standard, small casing suddenly takes on a far more complex shape.

It all comes together to create a familiar-looking model, but in a way that is truly masterful and, perhaps most importantly for a LEGO theme that is now entering a third decade, refreshingly new. A fine example is the side panelling to the main body of the Slave I, which may seem simple on inspection, but blends with the lower canopy of the ship through a merely well-positioned overhang – connected, and in a way that significantly betters its predecessors, but, not as you’d ever have expected it to. Likewise, the one-brick-width added to the dark green sidepods is technically built using SNOT technique – but describing what you do with those slopes, plates and other parts we won’t spoil by mentioning as ‘Studs Not On Top’ feels like way too much of a generalised, simplified term.

Whilst the build level certainly will be best out of the hands of younger LEGO fans, somewhat paradoxically, this is truly the first System scale version of the Slave I that has been designed with swooshing and piloting around the house in mind. Indeed, it’s best to assume the designers were just trying to show off when they decided to include in 75243 a retractable, stable handle at the back/underside of the model. Its rigidity when pulled out allows for steady one-handed manoeuvres at any angle you care to turn your hand, whilst the flick-fire missiles can be activated with an extended thumb, to fire out at the front.

No previous Slave I at this scale has been as easy to play with in the way any Star Wars fan would naturally want to. The handle protects the construction from undue pressure whilst in flight, and folds away without disturbing the ship’s design or aesthetic in any way. One curiosity to the handle’s inclusion, perhaps intentional, is the ability to see all the way through into the cockpit of the ship. Yes, you can basically pilot from Boba Fett’s perspective.

Slave I should be a tricky customer to design, for the unusual number of changes in direction, the very many angles that create precise corners, and the rounded edges that are everywhere else. Yet, through 20 years and now five System scale designs, the LEGO Star Wars team of designers has consistently offered upgrade upon upgrade that has always maximised the potential of the bricks available to them. That 75243 Slave I – 20th Anniversary Edition does the same and then some is something very exciting to consider as we look forward to the next 20 years of LEGO Star Wars.

Also, there are minifigures. Let’s not forget that we can complete the bounty hunter collection now with the addition of Zuckuss. As if you needed another reason to pick this set up.