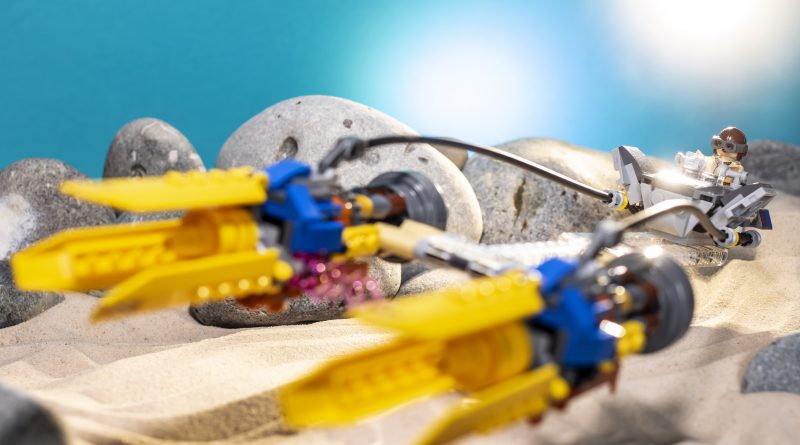 The LEGO Group is celebrating 20 years of the continually popular Star Wars theme. Representing the film that is sharing the birthday, does 75258 Anakin’s Podracer – 20th Anniversary Edition do The Phantom Menace proud?

It is not only 20 years since fans first had the chance to build a LEGO Star Wars set, it is also 20 years since the podrace provided the ultimate showreel for modern special effects. Appropriately, one of the original sets based on The Phantom Menace gets an update in the commemorative wave of LEGO sets. Spread across three bags, 279 parts give fans all they need to build 75258 Anakin’s Podracer – 20th Anniversary Edition. Young Anakin Skywalker and Padme Naberrie (‘member Naberrie?) are included along with an exact replica of the original Luke Skywalker in Rebel Pilot outfit – two are exclusive to this set. 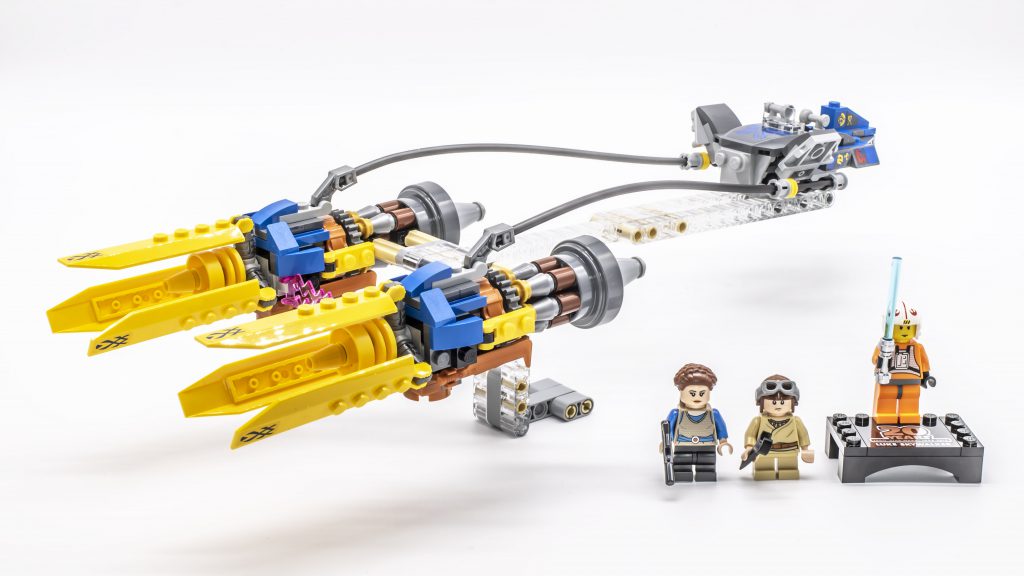 In 1999, one of the early LEGO Star Wars sets to be released was 7131 Anakin’s Podracer 7131. Two decades later, the LEGO Group has released an update to celebrate the 20th anniversary of the LEGO Star Wars theme. That is a long time in LEGO design. Back in 1999 the designers did the best they could with what was available, even introducing new parts for the set, but it still only contained 134 pieces.

75258 Anakin’s Podracer – 20th Anniversary Edition takes advantage of the newer pieces the designers have access to. Transparent Technic beams give the illusion of flying far better than the tan plates of old and the trans-purple lightning bolt pieces help recreate the podracer’s energy binders in a far more movie accurate look than before.

This podracer is an enjoyable experience right from the get go. Fans will delight in how special these sets are before they even start building, from the commemorative packaging to the instruction booklet containing facts from the films alongside comparisons between the new and old sets.

The first stage has fans building the ‘pod’ element of the racer. Although a relatively simple build, both the back end and front have a great look, especially considering the rudimentary techniques used. The front wings in particular are a tricky thing to get right, but clever use of 1×2 plates with clips attached to 1×2 with bars provides a perfect look. The colour scheme, combining light and dark bluish grey, helps everything seamlessly blend together. Stickers are used to add detail throughout, including three on a single 1×3 slope. While they look great and add to the finished design, printed pieces could have helped add to the special feel this 20th anniversary edition intends to evoke.

The build for both engines is an equally enjoyable process. The sub assembly that combines a Technic turbine wheel, axle pins with friction ridges, 1×1 cones and 1×1 round plates slots into the rest of the build in a very satisfying way.

As expected the engines are a huge improvement on the original design. In The Phantom Menace it is explained that Anakin built the racer himself from junk scattered around in Watto’s yard. By combining standard system bricks with Technic pieces, the designers have expertly achieved this look. The use of NINJAGO swords in a metallic copper colour as greebling is especially inspired.

There is slight repetition when constructing the engines but this is broken up by bag three containing two of the three minifigures, namely Anakin and Padme.

Anakin is a new variant for 2019 but was also included within the 75223 Naboo Starfighter. Padme is an exclusive to this set and looks great, especially the torso printing. She has medium legs (which are bendable) and scales perfectly when compared to Anakin. Her hair piece is new too, it is beautifully elaborate and captures her look perfectly. Her facial expressions are pretty strange – does anyone remember Padme ever being so angry in The Phantom Menace? Even when she captured Nute Gunray she seemed rather zen.

The third minifigure is the 20th anniversary Luke Skywalker minifigure, which is covered in more detail along with the rest of the special minifigures in the Minifigure Spotlight feature.

This is an incredibly enjoyable experience from start to finish, it’s clear a lot of love and care has been put into this set. The finished Podracer not only has a great design but the clear Technic bars create a hovering look that allows it to look absolutely spot on when displayed. With the stand it balances on its own and fans can even use the bottom stand as a handle giving the Podracer a lot of swooshability (did that word exist 20 years ago?).

While The Phantom Menace might not be everyone’s favourite film, it marked the triumphant return of the series and pushed the world of visual effects on by decades. It seems only right that one of the most thrilling parts of the film gets a 20th anniversary set, and as a LEGO representation of Anakin’s Podracer this set offers great value for money and is a fun and rewarding building experience. It is so wizard.