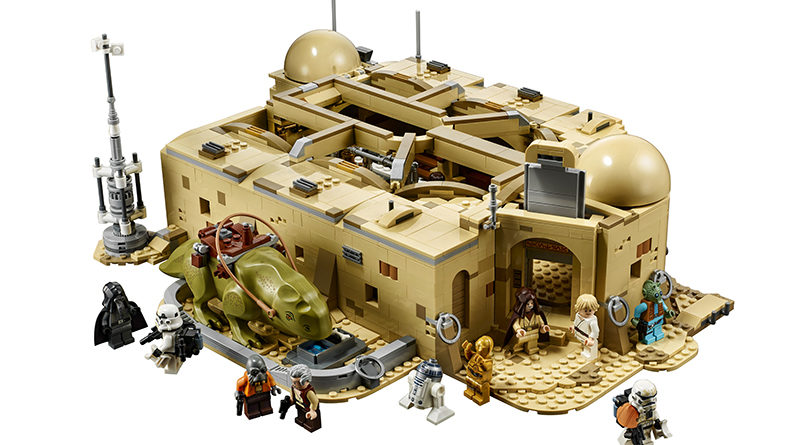 After teasing fans with just one small image, the LEGO Group has announced Star Wars 75290 Mos Eisley Cantina in full, with a gallery of images showing off the upcoming set.

There are some iconic and memorable locations in the Star Wars universe, but few are as beloved as the Mos Eisley Cantina. While the wretched hive of scum and villainy has been released as a LEGO set before, it has never been a 3,187 piece full location set before. On September 16, LEGO.com will launch 75290 Mos Eisley Cantina as part of the Master Builder Series.

Not only will 75290 Mos Eisley Cantina offer the most complete LEGO version of Chalmun’s Cantina to date, but it will include a massive 20 minifigures, with some of the more obscure characters from the bar finally getting their LEGO moment. More details about the set have been announced, following the previous tease.

An important part of Luke Skywalker’s journey, it is the cantina where he starts to experience a larger world beyond the homestead. It’s there where he gets into a disagreement with Ponda Baba and Dr Evazan (both included in this new set), which Obi-Wan manages to defuse.

“The first time I watched the Cantina scene in Star Wars: A New Hope, I was just 12 years old. I remember thinking, ‘this is where the adventure starts!’ Years later, when I then became a LEGO Star Wars designer in 2016, this was the first set I built,” says LEGO Model Designer Cesar Soares. “With this design, we’ve added external buildings like the Jawa shop, refined the details, and chosen an impressive 21 minifigure characters, including all-new alien figures. I love that all Star Wars characters have cool backstories, no matter how briefly they appear. It wasn’t easy to decide which characters to include in the set, but we hope fans will love the entire model and its line-up of heroes and villains.”

While it is best known from the bustling sequence in A New Hope, which culminates with Han Solo shooting Greedo, the cantina appeared in the first season of Star Wars: The Mandalorian, illustrating how life had changed on Tatooine in the intervening years.