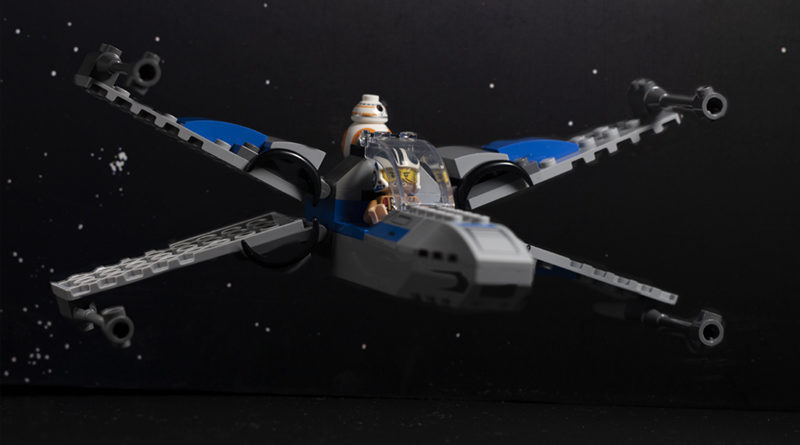 LEGO Star Wars 75297 Resistance X-wing is the only representation of the sequel trilogy in this current wave, so will it leave us clamouring for more like The Force Awakens, or will it try to subvert our expectations like The Last Jedi?

The LEGO Group truly does cater for every age – from preschoolers enjoying DUPLO to adults getting stuck into the myriad 18+ sets, there’s something for everyone. The 4+ range bridges the gap between DUPLO and System bricks, offering the youngest of fans the experience of a LEGO set while also ensuring the build isn’t too challenging by using larger parts and fewer steps.

These sets formerly fell under the ‘LEGO Juniors’ umbrella, but were rebranded to LEGO 4+ a few years ago – and with that new label came the first LEGO Star Wars sets designed at this entry point, including 75235 X-wing Starfighter Trench Run.

Two years later, young LEGO fans now have the opportunity to construct Poe Dameron’s Resistance fighter. In those passing years, not much has changed except the colours of the two starfighters – the designs are almost identical.

That’s not necessarily a bad thing, though: those fans who purchased (or more specifically were bought) the older X-wing will have moved on to more advanced sets, and now a whole new batch of youngsters are ready to enjoy assembling their very own X-wing. Let’s see how it stacks up.

A 4+ set contains pieces that are much larger than those in regular System models, and there are also no stickers, with all the detail coming from printed parts. This makes it much easier to assemble for older fans, but is perfectly pitched to give the set’s target audience a sense of satisfaction of completing a model on their own. The entire fuselage is made up of one large single piece for the undercarriage, four slopes and a wedge for the nose cone.

The cockpit is just large enough to seat Poe inside, and his controls are represented by a single printed 1×2 slope, so in that regard it’s just as detailed as the recent 75301 Luke Skywalker’s X-wing Fighter. And unlike Luke’s larger X-wing, Poe can actually sit in this cockpit rather than lying down. Score one for 4+.

The canopy is a single transparent piece that clips on to the top and can open and close to allow Poe inside. It’s not sealed and does look a little strange, but in-keeping with this drastically simplified and scaled-down spaceship it seems to work. BB-8 sits upon a 2×2 jumper at the back, which is one of two differences between this ship and its predecessor’s design.

The wings all share the same design, so the same sub-assembly is required four times in order to finish them off. Again, they use simple parts that mirror that of the old set, but the use of wheel arches to represent the engines is new and looks quite accurate. All four wings are independent of one another and attach to the main fuselage via hinge plates. At this scale, it’s probably the best design for the s-foil mechanism.

There is no landing gear, which is fine when the wings are closed together as the X-wing can just rest on the ground – and when the s-foils are locked into attack position, they are actually sturdy enough to still be able to rest on a table and support the whole model.

The overall design is a little hit and miss. From the front and back it definitely captures the unmistakeable look of an X-wing, but from the side it just looks too squat, blocky and almost unfinished. While it can be appreciated that this is intentionally a very juniorised representation of the starfighter, it is practically the same design from two years ago and an update would not have gone amiss.

Two minifigures are included within the set, Poe Dameron and BB-8. Poe remains unchanged from the 2016 variant found in the larger 75149 Resistance X-wing Fighter. His detailed torso is excellent and the printing on the dual-moulded helmet is even better, but the legs remain unprinted. BB-8 also remains unchanged from 2019’s larger receptor variant.

In previous Star Wars 4+ sets there has usually been a main vehicle, like an X-wing or Snowspeeder, plus a smaller build that either represents a small interior or landscape area. There’s also a good guy and a baddie, which allows for battles to be played out with only the need for one set. 75268 Snowspeeder came with the speeder, the pilot, a snowtrooper and a representation of Echo Base, all for the same price tag as 75297 Resistance X-wing.

Here, though, it’s just the X-wing. It’s very swooshable, even for the smallest of hands, and no doubt Poe and BB-8 will be sent off on as many adventures as a little one’s imagination will allow, but it’s nice when a set gives its builder a little helping hand in play ideas by including a minifigure from each faction – and it’s even nicer when that lack of extras is reflected in the price.

As it stands, this is definitely too expensive for what you get. The larger pieces are obviously costlier to produce, and the printed parts will raise the price too, but there’s not enough of either to warrant the price tag, especially when compared to other similar sets in this age range. It seems even at an early age, Star Wars fans get the raw end of the stick.

For most adult fans, 75297 Resistance X-wing will be an instant pass. It’s too simple, the build is over far too quickly and the finished model looks too basic and child-like. However, this is intended for the youngest of LEGO builders and in that department it certainly succeeds. The build may be easy, but it’s engaging enough to keep young minds entertained. The printed parts add some nice detail and the fact the s-foils can open and close adds to the play value of the model.

On one hand, it’s admirable that the LEGO Group specifically designs these sets with the youngest of fans in mind, but 75297 Resistance X-wing’s price could be a little off-putting for parents. If you’re prepared to wait for a price drop (or just suck up the RRP), this makes a great introduction to the wider world of LEGO System for kids growing out of DUPLO.