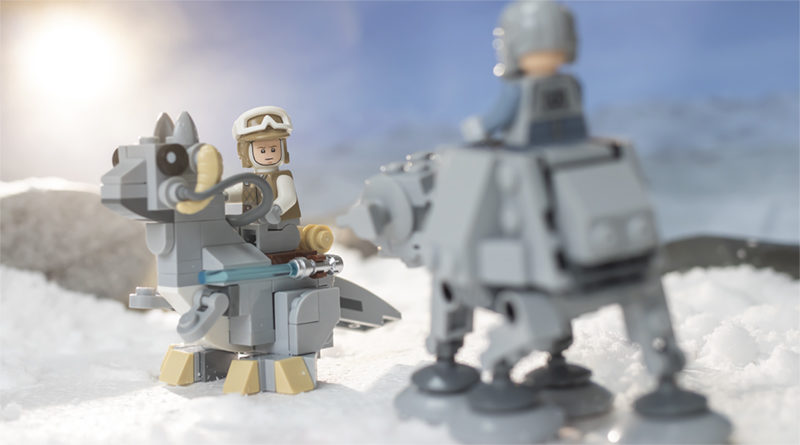 LEGO Star Wars 75298 AT-AT vs Tauntaun Microfighters pits two icons of Star Wars together in a battle that seems incredibly one-sided, but ends up being the pairing we didn’t know we needed.

The AT-AT is the Empire’s most devastating ground assault vehicle and completely covered in impenetrable armour. The Tauntaun is a snow lizard covered in fur, offering absolutely no protection from laser blasts whatsoever. But in 75298, they’re apparently going toe-to-toe. Let us know how that works out, Luke.

2015’s 75075 AT-AT Microfighter quickly grew to be one of the most beloved in the subtheme thanks to its ridiculously cute proportions. It’s been put to use in fan builds and photography to great effect, and a lot of its popularity is due to its shrunken features resembling that of a small pet rather than one of the Empire’s most imposing vehicles.

75298 AT-AT vs Tauntaun Microfighters updates this fan-favourite, while also continuing the recent trend of brick-built creatures from across the galaxy with a scaled-down Tauntaun. Looking beyond the fact that it’s in no way, shape or form a fair fight, how does this latest pair of Microfighters measure up?

The microfighter ‘versus’ sets contain two models to build, along with two separate instruction manuals. The builds can either be built one after the other, or as suggested on the back of the box, in tandem with a friend or family member. Whichever way you decide to build, the first bag focuses on the updated AT-AT.

With any updated model, comparisons will obviously be drawn between the older and newer versions. Right from the start it’s clear the techniques and parts used here are going to be very different from those in the previous AT-AT. It’s not even a slightly tweaked design – it feels like a completely new way to build a very similar model.

A single light grey plate starts the build, followed by brackets and plates with Technic pin holes to make up the central core of the shrunken All-Terrain Armoured Transport. Four 2×2 brackets are then connected to the top, giving the vehicle its main bulk as well as providing a seating area for the driver (or is it pilot?) to sit with a printed 1×2 console representing his controls. Finally, wedge plates and slopes are added to the sides, providing the bulk of the body. The shaping, weight and detail are all a massive improvement over the older model.

The head has also been given a massive overhaul. Considering it’s only built on a 2×2 plate, the level of detail and accuracy is excellent, from the solutions for the lower and side cannons to the printed 1×2 cockpit slope, which was previously only used in 40333 Battle of Hoth 20th Anniversary Edition. The head is attached to the body with a ball joint, and so has an incredible range of movement – adding even more poseability options for play and display.

The only similarity between the old and new is the design of the four legs, although the dishes used for the feet have had their colour inverted. While the new model is definitely more detailed and more accurate to its on-screen counterpart, the poseability is slightly compromised as the legs have far less movement to them. It’s a minor gripe, though, as overall it’s a fantastic little rendition of an AT-AT.

The second model included is the first time the LEGO Group has released a brick-built tauntaun. Previously fans have been presented with a dewback and bantha from A New Hope, so it makes sense the next comes from The Empire Strikes Back. Both previous models were wonderful designs with a real chibi charm, so the tauntaun has a lot to live up to.

Unlike the AT-AT, the tauntaun is mainly made up of much smaller parts. The AT-AT utilised a lot of plates, wedge plates and slopes, but the tauntaun uses smaller 1×1 parts for the necessary details. The entire body is built upon a 3×3 plate, which makes the model feel very compact. Through the use of curved slopes and regular slopes, the tauntaun’s body takes shape surprisingly quickly. A tail built from a 1×4 curved slope attaches to the body via a ball and socket joint, giving it quite a lot of vertical movement, as well as a little horizontal articulation.

While the body and tail look great, the head is absolutely fantastic, with tonnes of detail crammed into a really compact area. The shaping is spot on, and the ears are both accurate and adorable at the same time. The printed eyes help to give life to the model, and the horns and reigns are totally authentic. The only negative is that the head sub-assembly attaches straight on to the body rather than via some form of hinge, rendering it completely static.

The legs, while being another great design, are equally rigid. It’s a real shame that the model is so stiff, as just the slightest amount of posing options would have been fantastic. From certain angles it looks absolutely fantastic, but viewed straight on or behind it looks very blocky. There is one very fortunate deviation from the movie, in that it smells just as good on the inside as it does on the outside. (We checked.)

Two minifigures are included, and both are up there with the best in this current wave of Star Wars sets. In fact, only Din Djarin in his Beskar armour beats them for overall quality. The AT-AT driver is the same as the one included in the considerably more expensive 75288 AT-AT from 2020, with exquisite printing across the incredibly detailed helmet, torso and legs.

The update to Luke in his Hoth fatigues is quite extraordinary. It’s a beautiful minifigure in every aspect: the face wrap printed around the head looks superb; the two facial expressions offer variety; and the torso printing has a wonderful criss-cross design that helps add texture to the jacket, as well as being accurate to the outfit worn on-screen. This pattern continues down on to the legs, too, finishing off this minifigure perfectly. Luke comes with his trusty lightsaber and binoculars.

The only sticking point is that both have been armed with stud shooters as opposed to standard blasters, something usually reserved for battle packs. They certainly add to the play value, but they are the LEGO equivalent of Marmite – some people love them, some hate them, so it really depends on which side of the fence you sit as to whether you’re happy to see them.

Two brilliantly designed and executed Microfighters, consisting of a wonderfully adorable brick-built tauntaun and a fantastic update on a previous classic, plus two exceptional minifigures – and all at a very reasonable price – leaves absolutely no room for complaint. 75298 AT-AT vs Tauntaun Microfighters is perfectly priced and great value for money, and how often can that be said about a LEGO Star Wars set?

75298 AT-AT vs Tauntaun Microfighters is a fantastic addition to the LEGO Star Wars line-up. Both models look great and are fantastic micro-renditions of their larger subjects, and they’re also a pleasure to build, as despite them coming together fairly quickly, they both exhibit a great use of parts.

Of course, an actual AT-AT would obliterate the small snow creature, so the set really should have been titled AT-AT and Tauntaun, but that’s just nerdy nitpicking, and takes nothing away from the product itself.

This is a set that’s fun to play with (who doesn’t want to bring down an AT-AT with a humble tauntaun?), looks great on display, has a real charm and contains the best AT-AT driver minifigure ever released, along with the best variant of Luke in his Hoth attire we’ve ever seen – all for an incredibly reasonable price. Grab it as soon as you can.