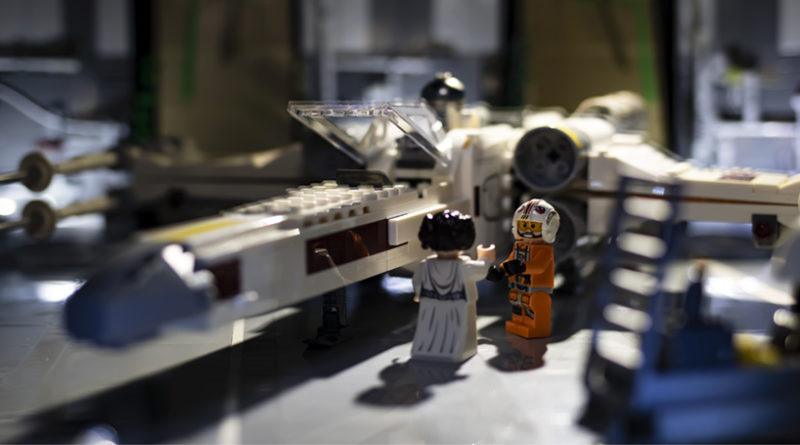 LEGO Star Wars 75301 Luke Skywalker’s X-wing Fighter offers fans a more accessible and less expensive way to add the iconic spaceship to their fleet – but with fewer bricks to play with, has anything been sacrificed as a result?

The unmistakable silhouette of the X-wing’s S-foils locked into attack position has helped make the starship the most recognisable vehicle from a galaxy far, far away. For many it is the epitome of Star Wars design, and the benchmark to which all other vehicles must rise. The LEGO Group obviously agrees with this notion, as 7140 X-Wing Fighter was the first ever LEGO Star Wars set to be released way back in 1999.

Since then, the company has released a further 10 different X-wing models (not including UCS sets, polybags or Microfighters), each one updating and improving on the initial design. This year’s rendition is cheaper than its predecessors, contains fewer bricks and is somewhat scaled down, but still manages to capture everything that makes the X-wing such a popular mainstay of the Star Wars franchise.

Those who have built a LEGO X-wing in the past will be on familiar ground with some of the techniques used throughout this build. Several key design elements have been carried over from previous models, and for good reason, as they achieve a high level of both accuracy and functionality. However, there are still enough new techniques spread throughout the model to keep even the most ardent LEGO X-wing fans entertained, as well as improving upon existing models.

The build begins by assembling the nose and cockpit. The construction of the nose utilises a similar technique seen in previous models. Two 1×10 plates with two 1×6 plates on top are attached to one another using hinge plates at the front, before being attached to the cockpit with two more hinge plates at the back. Dark red and white 1×4 bricks are then added down the sides, with the light grey 2×4 wedges used for the nose tip finishing the distinctive original trilogy colour scheme. Stickers help add some detail to the front, although it would still look great without them.

The cockpit uses the same printed canopy piece as last year’s 75273 Poe Dameron’s X-Wing Fighter, with its internal seating built into an area six studs long. A 2×2 slope makes up the backrest and a 1×2 panel with central dividers allows Luke to sit inside. It’s an okay design, but it’s not the snuggest of fits for Luke – once inside he wobbles around and looks way too reclined. There’s also a 1×2 slope with printed console used for the controls, which is fine, but it would’ve been great to have had either a print or sticker with the X-wing’s displays seen during the Death Star trench run as opposed to a generic print.

From here new techniques are introduced to the build, the first of which focuses on the construction of the folding wings mechanism. It’s a surprisingly complex design consisting of a plethora of Technic lift arms, pins and axles, which go together to form a concertina-style sub-assembly that opens and closes with a very smooth movement. It actually feels nicer to operate than the larger models, but a bit of concentration is needed during this stage as it can get somewhat confusing – it might be a small unit, but there’s a lot going on.

Despite 75301 Luke Skywalker’s X-Wing Fighter‘s scaled-down size, the designers have still managed to create nice pockets of detail throughout – even more so than on some of the previous larger renditions. The back engine in particular has some nice greebling, consisting of two 1×2 grilles, a 2×2 round tile with open stud, and two 1×4 offset plates. It’s fairly simple parts usage, but certainly helps lift the overall design aesthetic.

At the front of the wings, the four engine intakes are recreated using a new 2x3x3 round brick with a recessed centre. This set also includes a really exciting new part: a 1×1 brick with Technic axle hole, which surely opens up the possibility for some really interesting building techniques in the future.

The four wings are incredibly enjoyable to put together, aided by the surprising amount of detail attached to them. They are a lot more involved than you might expect just from looking at this finished model, and it certainly makes the whole experience a lot more engaging as a result. Connected to the bottom wings are two spring shooters and additional skis to represent the landing gear. The upper two wings have more detail added through the use of stickers.

The final stage of the build focuses on assembling the four back engines, which rely on similar parts and techniques that have come before. While they look very accurate to their on-screen counterparts, the same problem that has plagued past models persists: they’re only connected by one small Technic pin, and are therefore very flimsy. That’s not ideal for a model that’s intended primarily for play.

The front landing gear also feels odd – a ski is connected to a single Technic hinge connector via a 1×1 tile with clip. It doesn’t fold up underneath when the X-wing is in flight, instead just flopping around, and feels very, very loose. The placement of R2-D2 is a little off-putting, meanwhile, as the droid looks way too high behind the cockpit.

It’s such a shame when the rest of the design is really quite excellent. That said, overall this is a build that leaves you wanting more, in a good way, and that’s always a sign of an enjoyable set.

Three minifigures and an R2-D2 droid figure are included in 75301 Luke Skywalker’s X-Wing Fighter, and two are brand new and exclusive. We’ve seen Luke Skywalker in his rebel pilot jumpsuit before, but this is a new variant, with a slightly different torso print: the front panel on his chest is slightly askew, and his breathing tubes are in a different position. The printing on his legs is also slightly different. The only thing that remains the same is his face, which is actually a shame as this would’ve been the perfect opportunity to introduce a new print that more closely resembles a facial expression from the final Death Star trench run.

The other new character is one that Star Wars fans have been requesting for a long time, rebel leader General Jan Dodonna. While he has excellent printing on the torso and his hair piece is quite accurate, the beard doesn’t feel long enough. Perhaps a white beard accessory would have been a better choice than a print on his head piece, but it’s still nice to finally get an official minifigure of this character.

Princess Leia with her sloped dress piece has only appeared before in 2019’s 75244 Tantive IV, so represents a fantastic inclusion here. She really is a wonderful minifigure, and the folded robe printing on her back is particularly noteworthy. Finally, R2-D2 remains unchanged from the four previous 2020 versions.

Retailing at nearly half the price of last year’s X-wing, you would be forgiven for thinking 75301 Luke Skywalker’s X-Wing Fighter is half the set. While it’s certainly a scaled-down starfighter, it’s by no means an inferior representation. The build is interesting and enjoyable and in places the final model has more detail than some of the larger predecessors. The shaping and overall look is spot on, and the minifigures are excellent. Considering this is a Star Wars set, which are often slightly overpriced due to the licence, this is actually exceptional value for money.

While it’s not without its faults, 75301 Luke Skywalker’s X-Wing Fighter is still a worthy entry in the LEGO Star Wars fleet. The finished model has perfectly captured the iconic look of the famous starfighter, with equally attractive and accurate front, back and side views (except for the rather ugly spring-loaded shooter missiles, which can always be left off if you prefer).

Opening the S-foils ready for an attack run is even smoother and more satisfying than in previous renditions of this ship, and the included minifigures are certainly worth adding to any LEGO Star Wars collection. The price is also incredibly tempting, and the LEGO Group should be applauded for releasing such a classic and desired ship for a price tag that seems well within the reaches of most of its consumers.

If you want a highly detailed and accurate rendition of the rebel ship, you might be better off hunting down 2018’s 75218 X-wing Starfighter – but if you’re simply looking for an entertaining build, desirable minifigures and a classic Star Wars icon at a price that won’t break the bank, 75301 Luke Skywalker’s X-Wing Fighter comes highly recommended.

Support the work that Brick Fanatics does by picking up your LEGO Star Wars sets using any one of our affiliate links.