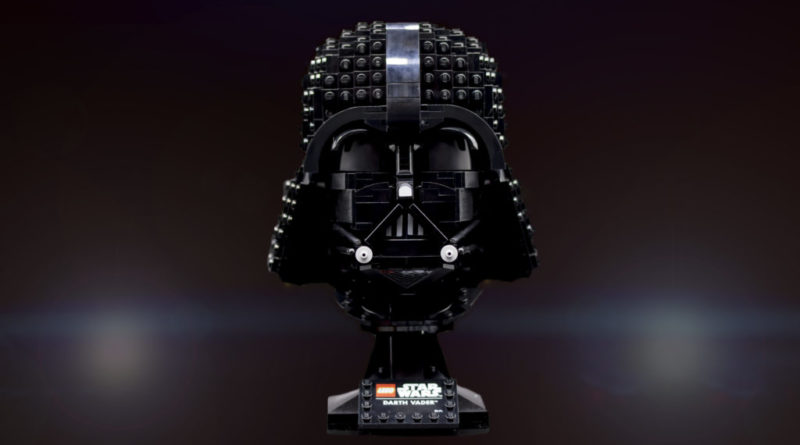 Following in the footsteps of last year’s sought-after and highly-rated LEGO Star Wars helmets, the spotlight finally falls on the Dark Lord of the Sith in 75304 Darth Vader Helmet.

Rather fittingly for a character of Vader’s stature and cinematic importance, this is the largest, most involved LEGO Star Wars helmet to date. A total of 834 pieces are required to complete the imposing model, and the building techniques used are like nothing we’ve seen in any of the other helmet releases to date.

The LEGO Group has been somewhat hit and miss over the years with its brick-built renditions of Darth Vader, but 75304 proves you should never underestimate the power of the dark side.

As Star Wars Helmets are targeted at the adult market, we are yet again presented with the familiar sleek black packaging, which in this instance immediately brings to mind Hasbro’s Black Series. The image of Darth Vader on the box is surrounded by a faint red glow, which is both stylish and appropriate for the character.

Unfortunately, once the box is open that feeling vanishes quicker than a Rebel soldier guarding the Tantive IV corridor. Inside the manual is a low-res, grainy image of Vader from A New Hope, which looks more like a hasty screen grab than an official Lucasfilm image. Similarly poor-quality images were also present on the box for 75276 Stormtrooper Helmet, and it really cheapens the whole thing. The LEGO Group should and does know better than this. Worse still, inside is a small sticker sheet.

The debate over stickers versus printed parts has been discussed ad nauseam, but in a set that has the air of an exclusive collector’s item, printed parts would have been a much better and expected choice. It’s somewhat disappointing to see stickers here, especially as they are used for Vader’s grille and mouth piece and so require precise alignment in order to achieve a realistic finish.

Now those negatives are out of the way, the rest of the review can be used to sing the praises of what is otherwise an incredibly enjoyable, involved, considered and slick set – talk about a redemption story worthy of the Dark Lord himself.

While the build does begin in the same vein as other Helmet Collection sets – namely by constructing a solid base that the bust will eventually be placed upon – fans who have previously put together a Star Wars helmet may find it surprising that the base here is somewhat smaller than other models. There’s a good reason, though: to make room for the neck piece for Vader’s helmet, which gives the finished model a more imposing feel, especially when compared with the other sets.

With the stand and neck piece assembled, attention turns to the construction of Vader’s facial features. Right away some really unique techniques are introduced, including several not seen before in the LEGO Star Wars Helmet Collection. A particularly creative series of sub-assemblies are required to construct the lower jaw and mouth section.

The rest of the assembly is then built up with a wondrous mix of plates, wedge plates, black ingots, bricks with studs on the sides, slopes and even 1×1 round tiles with pin holders. Two small sub-assemblies are flipped upside down and connected to these pins via 1×1 round tiles with holes. It all feels completely different to anything that’s come before, which makes each stage as exciting as the last. Even better, watching the sinister face of the Dark Lord begin to take shape evokes feelings of the final scenes from Revenge of the Sith, when Anakin becomes entombed in the famous black suit.

The frame underneath Vader’s mouthpiece is another smart and unique element of the build, made from black lances connected to 1×1 plates with clips and black 6L bars connected via ball and socket hinges. Vader’s nose is equally as unique and enjoyable to put together. A small sub-assembly, only 1×4 studs long, hinges in three places via a series of clips and bars. It’s such a smart design, and fits into place perfectly – as do the Sith Lord’s eyes, which use black wheel arches as eyebrows. It’s a really accurate rendition, with Vader’s instantly-recognisable features authentically recreated.

The next stages of the build – the construction of the top and sides of the head – returns to familiar territory for the Helmet Collection, employing a series of staggered plates that slowly layer on one another to create the necessary curved shaping for the head. Do take note that some of the connections at this stage are quite flimsy and so a delicate touch is needed (one that this reviewer failed to have on several occasions!).

The distinctive thick black line that runs from the top of Vader’s eyebrows right to the back of the helmet is achieved using four separate sub-assemblies, which consist of 2×3 curved slopes that attach to the main build through clips. The connection between the four is almost seamless, while the use of smooth bricks next to exposed studs allows for an interesting texture to the model. Even if it isn’t completely accurate, it still captures the look of Vader, while retaining that all-important LEGO DNA.

The bottom fins of the helmet are made from a series of wedge plates, and clip on to the main bust allowing them to be angled into position. As to be expected with a symmetrical helmet there is some repetition during this stage of the build, but it is still enjoyable nonetheless.

Once finished, the likeness is almost spot on. To be overly critical, it’s perhaps just slightly too thin – one more stud width to the entire build would have perhaps looked even better. It may have looked slightly out of proportion next to the other helmets, though, so regardless it’s still by far the best looking Star Wars bucket in the entire range.

Early thoughts when 75304 Darth Vader’s Helmet was first revealed were somewhat mixed, mainly criticising the look of the nose and mouth area. However, once seen in the plastic it looks absolutely superb, and has captured Vader’s essence more than any other LEGO set that has come before.

It’s imposing, menacing and sinister – everything you want Vader to be. It looks amazing on display and even better when placed next to one, two or all of the other Star Wars helmets. Even more impressive, no new parts were made for this build – the entire thing comes together with pretty standard, readily-available bricks.

Following the trend of all the other LEGO busts, 75304 Darth Vader Helmet contains no minifigures. However, the finished bust is so good that the addition of a Darth Vader minifigure could arguably detract from the display appeal of the final model.

This is the largest, most involved Star Wars helmet and as such has 110 pieces more than 75274 Tie Fighter Pilot Helmet, the second-largest model in this range. However, it retails for only a fraction more (even less if you are reading this in the UK, where the price difference is just £5), which feels like excellent value. And for those who place importance on the price-per-piece ratio, that’s actually really good, too.

When it comes to the price, we have no complaints whatsoever.

After the frankly abysmal BrickHeadz rendition of Vader and the slightly questionable Star Wars Celebration-exclusive bust, the LEGO Group has finally hit a brick-built rendition of Vader out of the park. From the phenomenally entertaining build to the remarkable final model, 75304 Darth Vader Helmet is simply an exquisite set.

For veteran fans, this is a set that will surprise and entertain all the way through. New fans tempted will be blown away by the experience and will no doubt be searching for the next LEGO set to purchase.

It’s so nearly faultless with just a few minor grumbles, but once Vader is proudly on display those will become just a distant memory. In case you haven’t guessed by now, this is a set we believe has truly embraced the full power of the dark side. Stop reading now and go and buy it – you won’t be disappointed.

Support the work that Brick Fanatics does by purchasing your copy of 75304 Darth Vader Helmet from Jadlam Toys or LEGO.com using our affiliate links.

How long does it take to build LEGO Star Wars 75304 Darth Vader Helmet?

75304 Darth Vader Helmet will take roughly three hours to completely assemble, but it’s definitely worth taking your time as this is a set you’ll want to savour.

How many pieces are in LEGO Star Wars 75304 Darth Vader Helmet?

75304 Darth Vader Helmet measures in at 20cm high, 15cm wide and 14cm deep. It’s not the biggest of sets once it’s completed so won’t take up loads of space, but it will certainly make a huge impact once on display.

How much does LEGO Star Wars 75304 Darth Vader Helmet cost?