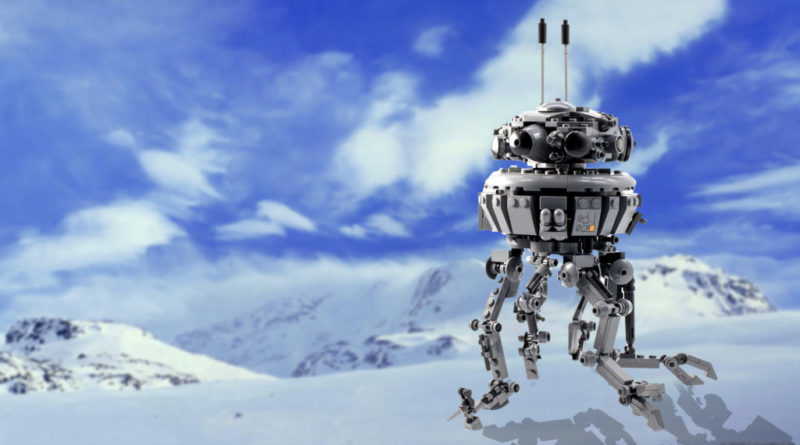 If you’re looking to track down another buildable LEGO Star Wars droid, you should focus your radar on 75306 Imperial Probe Droid – a set that offers some interesting and unique techniques and, once completed, is an authentic and accurate model.

Large, brick-built interpretations of characters and droids are becoming something of a mainstay for the LEGO Star Wars theme. Since 75187 BB-8 was released in 2017, fans have been treated to LEGO renditions of fan favourites such as Yoda, Grogu and D-O.

It’s now time to turn our attentions towards the Empire’s bots in the shape of 75306 Imperial Probe Droid. Based on the quality of what has come before, this could prove to be a set that finds the target.

Unlike the aforementioned sets, the Imperial Probe Droid is a much more compact unit. Comprising a relatively small body with six tentacle-like appendages hanging down, it’s a completely unique shape to any other brick-built droid. As a result, the build does not require a large stud-covered inner core to be constructed, instead beginning with the display base.

75278 D-O was the first set to include a small piece of environmental detail. In that model it was used predominantly as a display feature. Here, not only is the base a lot larger, but it’s also essential in keeping the model upright. The use of various white slopes and wedge plates create an authentic frozen, snowy look. The grey slopes scattered amongst the white adds to the aesthetic, as well as tying it into other Star Wars sets based on the ice planet of Hoth.

The use of white left and right 1×2 wedges with cutouts placed across the display plaque is a great touch, giving the whole base area a fantastic snow-covered aesthetic. The whole thing really adds to the attractiveness of the finished model. As a bonus, it could double for a fantastic minifigure-scale display piece featuring Han, Chewie and a minifigure-scale Probe Droid.

With the display base finished, the rest of the build progresses in a fairly linear way, starting with the Probe Droid’s body, followed by the long, dangling appendages and finally the head. The body’s central core is predominantly constructed using wedge plates, with 1×1 round plates with bar handles and 1x1x2 bricks with studs on the sides around the edges.

To these you’ll attach either 2×3 slopes that are connected to hinge plates, allowing for the necessary angles to be achieved, or small sub-assemblies using tiles, plates and clips to create texture and greebling, which is fairly accurate to the on-screen counterpart. Stickers are used for detailing and they actually look very effective, more so perhaps than if these sections relied solely on bricks. Four 1×3 slopes are then used to help fill in the gaps around the rest of the body. It’s not perfect when viewed close up, but from a distance it looks pretty good.

Due to the nature of the Viper Probe Droid’s design, the build can get quite intricate in places, with a number of small pieces used for detailing. Minifigure roller skates and ice skates, gun bases, candle holders, saw blades and more add real interest to the model, if at times being quite fiddly to attach.

It’s a real hotchpotch of parts and at times feels more like custom building, utilising whatever spare parts are lying around, rather than an official set. It does require concentration and patience, but it’s very entertaining and makes for a refreshing build, especially if you’ve had experience of prior models.

Each leg has several hinges, allowing for a huge amount of poseability – more so than perhaps any other brick-built droid. The legs can be tucked under the body or splayed out, while some can be angled and some straight. It’s a nice touch and adds to the overall display appeal of the model as a result. Each appendage is also unique, so although at first glance it looks like it could be a fairly repetitive build, it’s actually anything but.

The head is the most enjoyable and involved aspect of the entire build. Various sizes of round pieces and dishes attach to the central core of the head by slotting into a number of 1L bars with 1×1 round plates that surround the edges. It’s really satisfying to slot each piece in and watch the head’s detail slowly build up.

With the exception of the moveable legs, there aren’t as many play features as other models – in fact, there are none, really. This is definitely intended to be a model that is purely for display, and due to its fragile nature it has to be.

When viewed from afar, the finished model looks superb, but viewed up close It perhaps looks a little simplistic in places. Maybe greater detail could have been added to the legs and body panels to rectify this. Also, in order to be accurate, the designers were forced to predominantly use one colour, dark grey, across the entire build. It slightly suffers as a result, leaving it looking a little plain in places – especially when compared to the likes of BB-8. However, thanks to the brick-built display base, the set as a whole looks unique and attractive.

Whereas previous brick-built droids and characters have included a minifigure representation of the larger model, 75306 Imperial Probe Droid does not. It would have perhaps detracted from the main model had there been a smaller probe droid included too, but it does feel like a missed opportunity, as the current variations of minifigure-scale probe droids leave much to be desired.

It’s a very small complaint, though, as those who purchase this set are probably not buying it with minifigures in mind.

With several similar sets having been released over the last few years it is easy to draw comparisons when considering the price. 75306 Imperial Probe Droid is actually the cheapest buildable droid on the market, but don’t let that fool you into thinking this is a slightly pared-down model.

Last year’s 75278 D-O was slightly more expensive but had a considerably lower part count. The inclusion of the brick-built snowy landscape, which really enhances the overall display appeal of the Imperial Probe Droid model, makes this seem like an even better price.

75306 Imperial Probe Droid is a refreshing take on the buildable droids subtheme (if you can call it a subtheme?). The display base looks excellent and does a fantastic job of invoking the snowy wastelands of Hoth, while the intricate design of the droid’s various tentacles that hang below the body are not only enjoyable and varied to build but also create a nice level of interest while looking at the final model.

It’s perhaps not as involved a build as some of the other sets, but it’s certainly worthy of sharing the shelf space, as the same level of accuracy to the source material we’ve come to expect from this type of model is also present here.

The Viper Probe Droid is not the most popular or well-known of the droids that populate the Star Wars galaxy, but for die-hard fans there is a lot to appreciate about this model. It’s not exactly a must-have purchase, but very few people will be disappointed if their search for a new LEGO set ends up zeroing in on 75306 Imperial Probe Droid.

Support the work that Brick Fanatics does by purchasing your copy of 75306 Imperial Probe Droid from Jadlam Toys or LEGO.com using our affiliate links.

How long does it take to build 75306 Imperial Probe Droid?

75306 Imperial Probe Droid requires six bags of parts to be worked through before completion. Dispensing on skill level and speed you’ll likely need to set aside two hours to finish the build.

How many pieces are in 75306 Imperial Probe Droid?

75306 Imperial Probe Droid contains 683 pieces, which is over 100 more than last year’s 75278 D-O. There are also a load of spare parts that could be used to customise some of the apparatus of the Probe Droid’s various appendages.

75306 Imperial Probe Droid measures 27cm high, 24cm wide and 11cm deep. It is roughly the same size as 75278 D-O, but the brick-built display base makes it a longer overall model.

How much does 75306 Imperial Probe Droid cost?