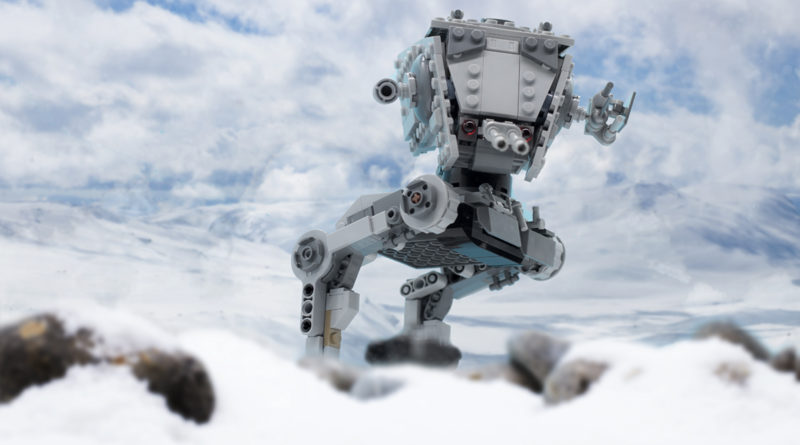 LEGO Star Wars doubles down on the battle of Hoth with a first variant of a familiar vehicle, but is 75322 Hoth AT-ST a worthy addition to a collection of unwalkable chicken walkers?

LEGO Star Wars is going all in with Hoth. On from the release of the gargantuan 75313 AT-AT, the upcoming wave of sets further add to Battle of Hoth recreations with two army building opportunities in the form of 75320 Snowtrooper Battle Pack and 40557 Defence of Hoth, and also, here, the return of one of the most iconic Star Wars vehicles, the AT-ST. We’ve had LEGO Star Wars AT-STs before, but this is the first themed towards its appearance on Hoth. This particular model is based on a version of the vehicle first seen in Empire Strikes Back in a ‘blink and you’ll miss it’ moment.

Far from being just a regular AT-ST sent into snowy climates, the Hoth AT-ST is actually a slightly different design with taller legs and a more truncated cockpit, both recreated faithfully within a LEGO set that is the largest of 2022’s first wave. The accompanying exclusive AT-ST driver, Rebel Trooper and Chewbacca look suitably snowy for the ice planet location they find themselves on.

Numerous chicken walkers (to use their nickname) have appeared across the theme ever since 2001’s 7127 Imperial AT-ST. With each passing set fans have seen more accuracy coupled with better building techniques and parts usage. One thing that seems to be absent from recent sets, though, is fully workable legs. Will this latest iteration address that problem or have we been presented with yet another AT-ST that looks good, but offers little in the way of functionality?

Four numbered bags contain the 586 pieces needed to construct the walker and Imperial probe droid, which although a small side-build has seen a huge overhaul since its last appearance – this is by far the most accurate and detailed minifigure scale probe droid that we’ve ever seen within the Star Wars theme. Interestingly there are no stickers at all featured within this set, as some extremely clever parts usage and design techniques add all the necessary details.

Comparing this Probe Droid to previous versions and it’s clear to see this is miles apart in terms of authenticity and quality. It almost feels more like a fan’s attempt at making a micro version of the much larger 75306 Imperial Probe Droid – released earlier in the year – than an official design. The technique used for the shaping of the body is pretty unique using 1×1 slopes connected to 1×2 slopes with cutout, which creates some interesting angles that run both horizontally and vertically. The rest of the probe droid uses a combination of smaller parts to build up the necessary details, and considering its size, it’s actually quite an intricate little build. It looks absolutely wonderful and makes you wonder why we haven’t seen something as well designed as this until now. It makes for a fantastic start to what is overall a really enjoyable building experience.

The AT-ST begins with the construction of the base for the cockpit. There’s a small amount of functionality added here in the form of a simple Technic gear mechanism that allows the head to swivel from side to side. It feels slightly smoother than 75153 AT-ST Walker but also a little looser. The highlight of this section, though, is the excellent greebling added throughout. Minifigure paint rollers, tap pieces, 1×2 grilles and 1×2 jumpers attached on the reverse side all add nice detailing to what is a pretty compact sub-assembly – it’s a surprising level of detail considering the overall size and recommended age of the set.

Surprising is definitely the optimal word to use when describing 75322 Hoth AT-ST because, like the probe droid and cockpit base before it, the interior of the walker is also a much more involved and entertaining process than imagined. Whereas past models have used fairly simple pieces to build the inside of the cockpit, this set uses everything from 1×1 round plates, slopes, bars, clips, Technic elements, wedge plates and more. The outside area of the cockpit is slightly less detailed than models we have seen before, but this could be due to the fact the Hoth AT-ST’s cockpit is actually smaller in scale anyway. Regardless, it still comes together in a very satisfying way and looks nicely compact and fairly accurate to its on-screen counterpart, and comes armed with the same firing mechanism that has been present across the last two AT-ST models.

The legs are perhaps the most surprising element of all – in both a good and bad way. This starts with the feet, where previous models used only a few large wedge plates, a 4×4 wedge and relied on stickers for the extra detail. 75322 Hoth AT-ST again turns to smart parts usage to create the necessary look instead. Wedge plates are used to build up the structure of each foot, with slopes and curved slopes to complete the shaping. Excellent greebling comes in the shape of dark grey Battle Droid bodies and Bionical mechanical arms, which look very effective. Disappointedly, though, it’s also a real surprise to find the legs yet again don’t actually ‘walk’ and so this model, like all previous recent versions of the AT-ST, can’t really be played with properly.

This is quite a drawback as while there are definitely vast improvements in a lot of areas in terms of building techniques, parts usage and detailing, the lack of functionality pulls 75322 Hoth AT-ST back into direct comparison with 75153 AT-ST Walker, and it’s the older walker that actually still offers a more complete and accurate looking model. Saying that, 75322 Hoth AT-ST is still an enjoyable set to put together and certainly is a better demonstration of what’s possible with the humble brick than most LEGO AT-STs that have come before.

Three exclusive minifigures are included within 75322 Hoth AT-ST and each one is actually quite excellent. The AT-ST driver features a brand new trench coat print on his torso, which continues down on to his legs. His helmet has the same printing that we’ve seen before but his facial print is new, consisting of one angry expression and on the reverse a much more light-hearted look, which if we are to be honest doesn’t really suit a member of the Imperial army, but it is nice to have the option regardless.

To battle the AT-ST and Probe Droid are two rebels. One unnamed female Hoth trooper – featuring a torso design that is very similar to the troopers that appeared in 75098 Assault on Hoth, just with a slight difference to the insignia on her chest – and a brand new variant of everyone’s favourite walking carpet, Chewbacca. Here he comes with superb snowflakes scattered over his hairy body and looks marvellous and very befitting of the icy environment that he finds himself in.

While these minifigures are fantastic additions to anyone’s collection and the inclusion of a female Hoth trooper offers a nice touch of diversity to the set, it does feel like a missed opportunity to update Han Solo’s Hoth minifigure – who better to take on the probe droid with his Wookiee pal? Diversity still could have been achieved by presenting fans with a female AT-ST driver instead, but really this is a small niggle in what is otherwise a great selection of minifigures.

75153 AT-ST Walker was the last time fans were offered a faithful recreation of an AT-ST, most closely resembling those found in Return of the Jedi. It retailed for the same price as this current version (in the UK and Europe anyway, in the US it was $10 more) but had nearly 150 less pieces, didn’t offer up quite the same inventive building techniques and had no side builds.

75322 Hoth AT-ST, on the other hand, is a fantastic building experience culminating in quite a unique Star Wars model, comes with three excellent and exclusive minifigures and also includes the brilliantly designed Probe Droid. Taking all of that into account this really is quite an impressive deal and set at a price point that should be quite tempting for most LEGO Star Wars fans.

While it’s true that the finished 75322 Hoth AT-ST isn’t quite as good as 75153 AT-ST Walker, it is still nonetheless a very enjoyable model to put together with unique techniques and surprising pockets of smart parts usage spread throughout.

Where it really shines above what has come before, though, is in the addition of the absolutely excellent probe droid and those brilliantly designed exclusive minifigures. It feels like there is more play value to be had with this set and even the small piece of landscape that comes with the Probe Droid will surely spark younger fans’ imaginations into recreating some epic Hoth based battles.

For the cost, build experience, minifigures and overall enjoyment offered by 75322 Hoth AT-ST this definitely comes highly recommended, and also gets the 2022 wave of Star Wars sets off to a very promising start.

LEGO Star Wars 75322 Hoth AT-ST is a deceptive set as it looks like it will be fairly straightforward to put together, but thanks to its ingenious parts usage it’s actually more involved. Expect to put aside between an hour-and-a-half and two hours to complete the model.