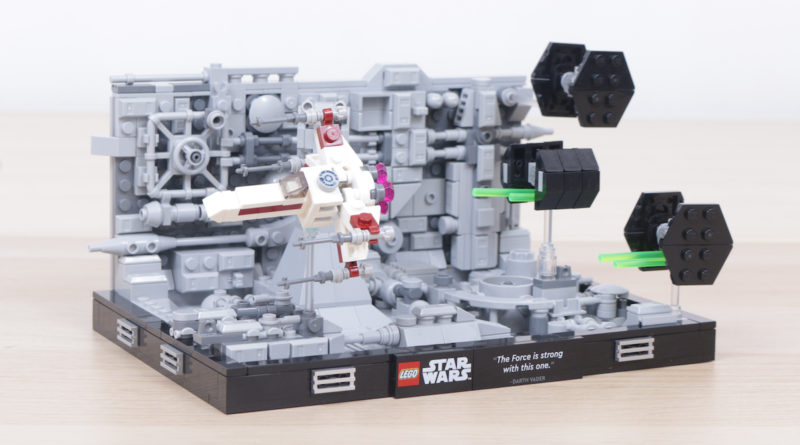 75329 Death Star Trench Run Diorama may have you comparing it with lesser LEGO Star Wars microscale sets that have come before, except this is better…

In preparing to review 75329 Death Star Trench Run Diorama, we felt somewhat obligated to go back and re-read our review for 40407 Death Star II Battle from two years ago. While that was a much smaller gift-with-purchase based around the battle on (and in) the second version of the famous cylindrical grey battle station, there are quite a few visible similarities in concept between it and 2022’s Diorama Collection release.

Indeed, for all intents and purposes and even with consideration to the likely very different design discourse that it will have undergone, the proximity of its release window and the general idea behind it means that 75329 Death Star Trench Run Diorama could quite easily sit as an extension of the series of builds that 40407 Death Star II Battle belongs to – it even looks like it at first glance, too.

Much as with the GWP series, here’s a vignette-style build based on a snapshot of a particular scene from one of the original trilogy Star Wars films, built in microscale, designed for display more than play.

The small GWP Star Wars scene builds have been a mixed bag so far, and received a mixed reception – the more of them that have released, the better they have become as the design team has learned best how to capture both the story points and details from the chosen scene, and also still factor in other considerations to create the right aesthetic to each environment.

Vignette builds need every detail to matter, both at an individual level and as part of the larger build – scene-based LEGO builds are there to tell a story and to quite literally set a scene, but doing so effectively is tricky, because this is a static medium, and the scene or environment chosen is anything but stationary. Collecting together the right mix of accurate and necessary features to at once carefully capture the scene and still prompt all the different story and character-driven memories people will have from that scene is no mean feat.

It took the LEGO Star Wars team four goes to get the GWP builds closer to such an overall design aesthetic that works in this way, in the form of 40451 Tatooine Homestead from April 2021. Along the way was 40407 Death Star II Battle, which was sparse in detail and very limited in appearance, with advent calendar-style builds and a Death Star II that offered a very dull grey colour palette that on display did not work.

So, with the failings of that GWP and the lessons learned from the wider GWP series of mini-Star Wars scenes in mind, how does 75329 Death Star Trench Run Diorama stand up?

Very well, and that’s even in saying that this isn’t a direct comparison between that GWP series of Star Wars scenes and 75329 Death Star Trench Run Diorama. Those builds, though, do serve as a recent and relevant example of the challenges of building at microscale effectively. One area in particular that the GWP scenes really struggled to overcome was around offering enough detail to specific, key aspects of the chosen scene, while staying true to the chosen smaller scale.

We’ve mentioned dissatisfaction with the GWP series for their advent calendar-style builds for vehicles and spaceships and, with an X-wing, two TIE Fighters and Darth Vader’s TIE Advanced centre stage of 75329 Death Star Trench Run Diorama, it’s an important consideration once more.

Importantly, then, it’s one that is answered satisfyingly so and primarily thanks to the slightly increased piece count and slightly larger microscale that the set has been designed at. Both of these factors contribute to a set of four ships that can then offer better detail, weight, parts usage and variety than what we’ve typically otherwise seen from microscale LEGO Star Wars vehicles.

It’s an observation that carries truth across the rest of the set too, with a whole host of different parts making up the Death Star trench to create a surface packed with detail, depth and all the types of intricacies and greebling that a piece specifically designed to sit on display needs to give it extended life and appeal on your shelf. You want a reason to look at a LEGO set designed for display, and all the different things to spot across 75329 Death Star Trench Run Diorama certainly helps draw your eye.

There’s no getting away from one fact, however: that even at a slightly larger microscale and the promise of greater detail, this is built around the Death Star and so is primarily a very grey LEGO set.

Lots of LEGO Star Wars sets are primarily the one colour, and more often than not primarily that shade of grey too, including two of the best ever. But in this instance, it’s really noticeable and quite detrimental. You start putting 75329 Death Star Trench Run together with the base and printed quote and LEGO Star Wars tiles, and five minutes later begin the rest of the numbered bags that all bar one visibly contain pieces of just one shade of light grey.

Regardless of the variety of pieces before you, it’s not the most interesting LEGO set to put together when they are all the same colour, particularly as most of what you are building is just a background. There are interesting build techniques used within this model, but very quickly into putting it together your eyes glaze over and what is otherwise great LEGO building becomes grey LEGO building.

How does this translate? You work on sections of the Death Star surface at a time, moving left to right across the base at first, before adding further detail in sporadic areas after that. Every step adds more and more grey to the surface and, even as the build offers up any number of intricate little details to add in, once you place it on that increasingly light grey canvas, it merges into the background and you move on, hardly appreciative of what you’ve just put together.

A good or bad build experience isn’t necessarily the marker of a good or bad LEGO set, though, and even with the issues that there may be in putting 75329 Death Star Trench Run Diorama together, it’s pertinent to add that the quality and detail you may have initially overlooked comes together and shines through in the final model once complete.

Indeed, exactly what makes building this LEGO set rather dull – too much of one colour that all merges into one background – is also one reason for why the final model is as good as it is. That Death Star trench background perfectly offsets the four ships flying across it and allows your eyes to immediately catch the points of focus they are meant to be on – the TIEs and X-Wing.

As a final model, while there is the (easily solvable) issue around the specific angle and placement of that X-wing to debate, the composition of the scene otherwise works wonderfully as a snapshot of the tensest moment from the climactic battle at the end of A New Hope. There is movement and action captured in the detail of 75329 Death Star Trench Run Diorama exactly where it needs to be, and what could so easily have felt like a gimmick in the form of that black border for the base actually really complements the overall aesthetic that the LEGO Star Wars design team has gone for here.

Given this is a microscale set, there are no minifigures included in 75329 Death Star Trench Run Diorama. Luke in his pilot fatigues and Darth Vader on a separate display stand would have felt appropriate, but detracted from the cohesive nature of capturing this scene across a compact, singular base, so their absence isn’t too keenly felt.

Coming in at £54.99 / $59.99 / €59.99 does price 75329 Death Star Trench Run Diorama slightly higher than perhaps it should be, simply for consideration that while getting 665 pieces sounds like good value, a high number of those are very small 1×1 plates and tiles that surely wouldn’t cost that much bought individually. The printed tiles for R2-D2 sat in the X-wing, the TIE cockpits and the LEGO Star Wars and Darth Vader quote are likely all contributing factors to the cost too.

Beyond this, though, 75329 Death Star Trench Run Diorama comes in around the same price as the sets in the LEGO Star Wars Helmet Collection, which is a fair comparison to make in terms of who this set may appeal to and what it can offer. It’s fairest to say then that the value you see in any one of those helmets is felt just the same in 75329 Death Star Trench Run Diorama.

There is one observation to make about all three of the diorama/vignette LEGO Star Wars builds in this April 2022 series – for the smarter 18+ branding that they are presented within, for their display-orientated purpose and generally for the older demographic the marketing around these sets is clearly targeting, it’s a bit cheap to have push-tabs to open the boxes, rather than tape to cut, as per larger, more expensive LEGO sets.

Whilst first impressions may have you thinking of 40407 Death Star II Battle and the rest of the LEGO Star Wars gift-with-purchase microscale scenes of recent years, there is a depth of quality within 75329 Death Star Trench Run Diorama that clearly sets it apart. Microscale building may not be for everybody, but for those who can appreciate the finer points of detail at such a level, 75329 Death Star Trench Run Diorama represents some of the best microscale building we’ve seen from LEGO Star Wars.

Capturing a snapshot of a memorable moment from the first Star Wars film, 75329 Death Star Trench Run Diorama offers a sense of movement and action in a lovingly-presented model. It may be boring to build, but it’s brilliant to behold.

Support the work that Brick Fanatics does by purchasing your LEGO Star Wars sets through one of our affiliate links. The LEGO Star Wars Diorama Collection is available for pre-order now and officially launches on April 26.

How many pieces are in LEGO Star Wars 75329 Death Star Trench Run Diorama?

75329 Death Star Trench Run Diorama comes in at around 21cm wide, 14.5cm deep and 12cm at its highest point, that being one of the suspended TIE Fighters.