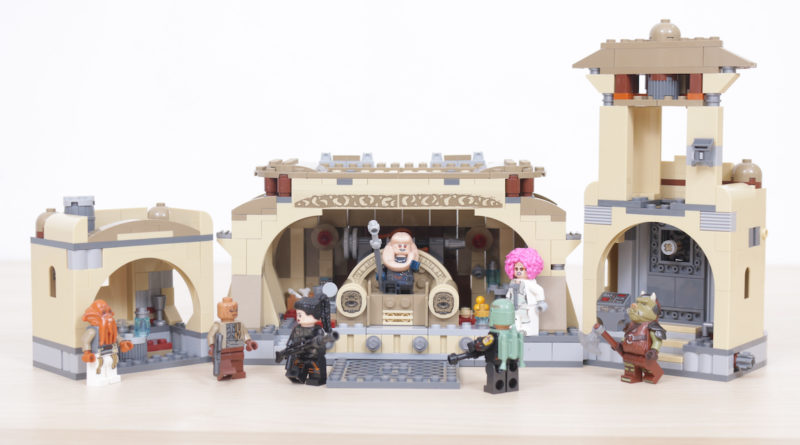 In designing 75326 Boba Fett’s Throne Room, the LEGO Star Wars team faced a difficult challenge. Create something for The Book of Boba Fett, based on Jabba’s Palace, designed to 2022 standards and budget requirements, but (presumably) only using concept material from a brief post-credits appearance in The Mandalorian, and all as a follow-up to the truly awesome 9516 Jabba’s Palace from 2012.

It is harsh and rather simplistic to label 75326 Boba Fett’s Throne Room as just those things, and in review to so openly only hold it up against a 10-year-old LEGO set – the location that the respective sets are based on has altered somewhat, while the budget parameters for each of the two sets are clearly different.

For instance, the piece counts may be rather similar, but the types of pieces able to be included are as different in some places as they are the same in others. 75326 Boba Fett’s Throne Room comes in at 15 pieces more than 9516 Jabba’s Palace, and there is a lot of very similar building and parts usage in specific areas, but there is also clearly a different collection of parts available in others.

The lack of a domed roof is the most obvious difference and one that visually detracts, measured against what you would expect that a model based on this palace would look like. Swap that roof out for a few more 1×1 round bricks, and what seemed like the same number of parts immediately doesn’t anymore.

The sets are from different eras in LEGO Star Wars history, and too deep a comparison between the two isn’t a fair review for either. However, the very specific and brilliant aspects around play, display and accuracy that are fully realised in 9516 Jabba’s Palace and that are not as well achieved in 75326 Boba Fett’s Throne Room mean we do have to bring the older set up when considering the new one.

They don’t deserve a one-for-one, literal comparison – there’s no contest in that regard; it’s not a fair fight for the context above. It’s just unfortunate for 75326 Boba Fett’s Throne Room that even if a direct comparison isn’t made, 9516 Jabba’s Palace still exists as a perfect example of every LEGO design fundamental done right, and that by natural extension highlights what doesn’t quite fundamentally work as well in 75326 Boba Fett’s Throne Room.

75326 Boba Fett’s Throne Room is based on the appearance of the location in the post-credits scene at the end of Season 2 of The Mandalorian. With The Book of Boba Fett in the works for a 2022 release and the long lead times that LEGO designers require to create sets, to hit the Disney+ show’s release with a tie-in LEGO set presumably meant this first appearance – and any concept art around it – was what the LEGO Star Wars team had to work with.

What had we seen of the location by that stage, then? There was an exterior shot of the castle – domed roofs and all – and interior shots very much reminiscent of how Jabba’s palace looked in Return of the Jedi, with shadowing, twisting stairs leading down to a dark, cramped throne room overlooking an even darker large open area (which we know from Return of the Jedi sits over the Rancor pit).

While we have seen a lot more to the location since in The Book of Boba Fett, this first look is in hindsight surprisingly familiar with what we’ve seen of the location before, and so it’s easy to understand why the general footprint to 75326 Boba Fett’s Throne Room seems to follow that of 9516 Jabba’s Palace, and why aspects such as the exterior walls, the entire floor and the adjoining tower are all very similar. Even the way the back wall of the throne room opens up is the same as it was 10 years ago.

Indeed, for everything the design team had to work with in putting together 75326 Boba Fett’s Throne Room, they could have been forgiven for entirely replicating every great aspect of 9516 Jabba’s Palace – for how good that set was too, few would have really complained. To their credit, the LEGO Star Wars design team didn’t do that, but unfortunately what it looks like they did do was begin to rebuild 9516 Jabba’s Palace, then midway through stop, turn left, add a little bit on the end and leave it at that.

A side-by-side of the two sets quickly highlights what we mean – look at how the main throne room for 75326 Boba Fett’s Throne Room is built on a near-identical base, but for the fact that it has had the front half cut off. The 2022 set is notably thinner, serving up a façade more than a dollhouse-style interior with depth and space to play.

All this to one side for a moment, though. Of course 75326 Boba Fett’s Throne Room can’t be a straight-up remake of 9516 Jabba’s Palace, and on the face of it, it still looks like a steady first tie-in LEGO set for The Book of Boba Fett, with three sub-sections coming together to create a long, sprawling scene, complete with throne for Boba to sit on, centre stage.

Details around 75326 Boba Fett’s Throne Room include a rotating spit behind the throne, an opening door to the tower, a collapsible couple of steps and the ability to pull the throne itself out of its position within the model. There is also a varied selection of minifigures included, debuting some new characters and including a first-ever Quarren. This is a credible list of all things you would hope such a set could include.

Considering all that then, 75326 Boba Fett’s Throne Room offers all that it needs to, right? Not everything, no, and not what could have tied it all together – space.

The play features are a door, a chair and some steps. The palace as it has been designed and simply as a location may not lend itself to much more than that, but there’s no getting away from how – as a playset that clearly began to follow the same footprint as 9516 Jabba’s Palace but then stopped – 75326 Boba Fett’s Throne Room is equally as reliant on space and environment more so than physical features.

But where that was created in abundance in 9516 Jabba’s Palace, it’s exactly what has been left out of 75326 Boba Fett’s Throne Room. And that’s where focus then sticks on play features being a door, a chair and some steps, because there’s no space for much other interaction with the set.

The seating area to the side of the throne includes room for two characters to sit, but comically half the characters who could sit there don’t actually fit. There’s little standing room in and around the throne itself, and if you count the 8×8 base plate as ‘part of the throne room, overlooking the Rancor pit’ then good luck accepting the next compromise the LEGO Group may throw at you, because it’ll be even cheaper than that.

The aforementioned tower is now a whole storey shorter and the dropping door feature is best described as only that, because there’s nothing but slight friction and your hand to hold it up for any characters to walk through.

Beginning to follow the same footprint as 9516 Jabba’s Palace but not fully committing to doing so is 75326 Boba Fett’s Throne Room’s mistake, as what we have is a nice-looking façade of a location set that is condensed, short-and-wide in design, and as a result compromised in play. It is a LEGO Star Wars set that squashes everything in, which may feel like the right thing to do stylistically so as to mirror the dark, dingy feel of the throne room, but it just gives the impression of something that used to be a palace but may now serve best as an extension to 75290 Mos Eisley Cantina.

75326 Boba Fett’s Throne Room may suffer in offering the best play and display experience, but it more than delivers on the selection of minifigures included, with all but Boba Fett himself exclusive to the set for one reason or another. The particular highlights are a first ever Quarren, a new head-piece mould for the more rotund Bib Fortuna, leg printing for the Gamorrean guard and a new Weequay guard design. There are arguably just two things missing from this line-up to really make it perfect, being Fennec Shand’s helmet (seems we can only get her helmet or her hairpiece in a set, not both) and a Twi’lek slave.

This character appeared briefly in The Mandalorian Season 2’s post-credits scene and shares a nice unspoken moment with Fennec, where after shooting almost everyone else in the throne room, the assassin shoots the Twi’lek’s chains off and motions for her to escape to freedom. What was a nice nod towards the more considerate, modern way of entertainment and storytelling that today’s Star Wars can offer may not have translated in the LEGO Group and Disney’s minds in just the same way for a LEGO Star Wars set.

75326 Boba Fett’s Throne Room comes in at £89.99 / $99.99 / €99.99, which for 732 pieces and seven minifigures – six of whom are exclusive in one way or another – is actually fair value, particularly for the LEGO Star Wars theme which can verge on the very expensive. In spite of the build’s shortcomings, it is priced fairly for what you get. Opens the door to customisation then, so as to improve the final model…

This is a LEGO Star Wars set that is unfortunately only half of what it could have been. 9516 Jabba’s Palace has lent it inspiration in design and aesthetic, but 2022 budget and creative decisions have stunted its potential for any real depth in play and enjoyment, and quite literally so.

75326 Boba Fett’s Throne Room very much comes across as a compromised set, and while it does offer a lot of value in particular areas and is nowhere near one of the worst LEGO Star Wars sets of recent times, in attempting to offer some of the priorities – something that looks true to the source material, has great minifigures and is fairly priced – it has had to leave out others, which its successor 9516 Jabba’s Palace revelled in including and for why it is rightly celebrated a decade on as a classic.

Not the best set, not the worst, but one to perhaps purchase alongside some extra bricks to build out the model as it should really be.

Purchasing your LEGO Star Wars sets through one of our affiliate links directly supports the work that we do at Brick Fanatics – thank you!

75326 Boba Fett’s Throne Room takes up to an hour to put together, with a fairly simplistic but mid-sized build.

How many pieces are in LEGO Star Wars 75326 Boba Fett’s Throne Room?

There are 732 pieces in 75326 Boba Fett’s Throne Room, including seven minifigures, six of which are exclusive to the set in one way or another.

75326 Boba Fett’s Throne Room measures around 32cm wide, 20cm deep and 17cm tall at its highest point, which is the tower.