Han Solo has appeared many, many times within the LEGO Star Wars theme over the years – but this is the first time Han Solo has turned up in the constraction range

Han Solo is a much beloved Star Wars character that many of us grew up pretending to be. When the character is introduced in A New Hope, the casuality with which he eases through the galaxy is one of the traits that makes him so very appealing. Now, the world weary smuggler will be front and centre in Solo: A Star Wars Story, making it high time that he joined the LEGO Star Wars theme as a buildable figure. 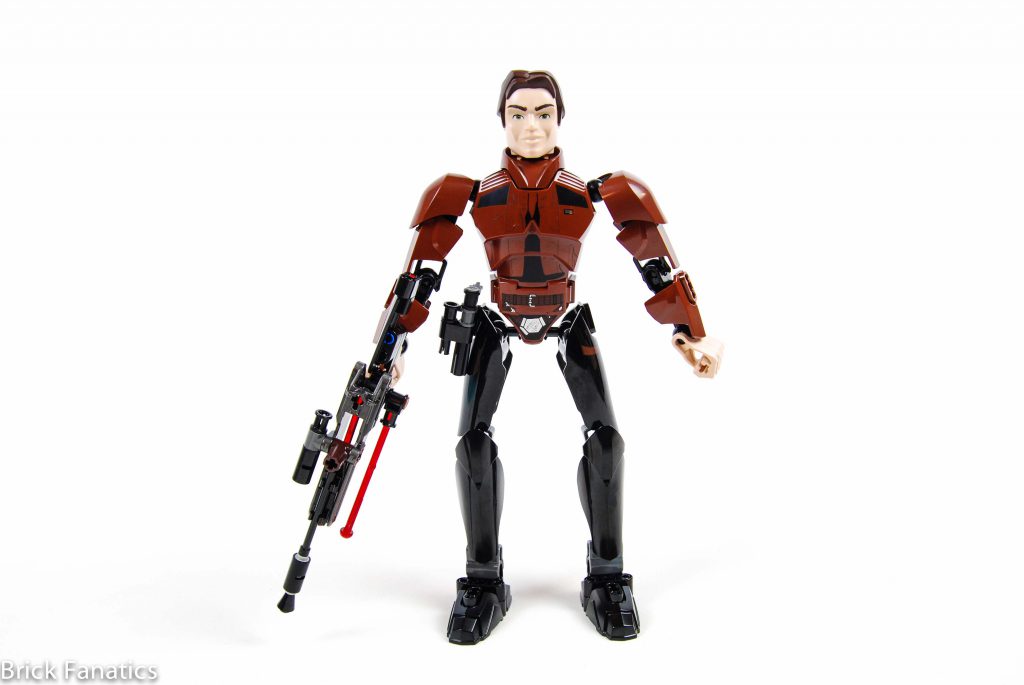 Unfortunately, 75535 Han Solo will not elicit the same level of delight and devotion. Suffering under the constraints of the medium, this is a set only for completists or those who want a Han to go with last year’s 75530 Chewbacca. This figure falls prey to the shortcomings that non-armoured buildable figures have struggled with since Luke Skywalker became the first LEGO Star Wars release back in 2015. With no cloth components to hide them, Han’s inadequacies and awkward size changes are on full display.

Despite the shortcomings, Han’s large scale figure is not without its strong points. Most noticeably, the printing is spot on. His torso features a high level of detail and appears to be movie accurate from what has been seen in the trailers for Solo: A Star Wars Story so far. The most impressive bit of printing is the thighs. They both have his distinctive barred pattern, but only a single side has a holster which is where the included brick built pistol goes. Distinguishing the place where Han’s iconic holster should be was a nice bit of detail. The face is highly detailed as well, but of course depicts Alden Ehrenreich. Those who grew up with Harrison Ford in the role will likely feel that something is off about the figure, despite the accuracy.

Two weapons are included for Han. The first is his iconic blaster and the second a large rifle which feels a bit oversized, even for a figure at this scale. It includes the now ubiquitous spring loaded component so it can actually fire. Despite being oddly sized in relation to the figure, the blasters allow for some cool poses so long as the arm is not too extended when holding the rifle; the weight pulls it down.

The downfall of 75535 Han Solo comes down to the limits of constraction techniques. His largely bare legs look wrong at most angles and feel too tall overall. The bulky chest when compared to the thin legs also feels wrong from an anatomical perspective (to the point that it looks… anato-comical?). Aside from posing the figure, there is also very little else that can be done once one has fired the dart blaster, or as my three year old called it his ‘pew pew’, a few dozen times. Regardless of its failings, those looking to get an accurately sized Han Solo to pair with last year’s 75530 Chewbacca only have this option.

Han Solo as a Constraction figure was somewhat inevitable based on the pattern the LEGO Group has established since the launche of Star Wars: The Force Awakens. Just because the figure was necessary, that does not mean that the character has translated into contraction well. Perhaps the designers did as well as they could, but 75535 Han Solo is undone by the constraints of the medium – send this one to the carbon freezing chamber.