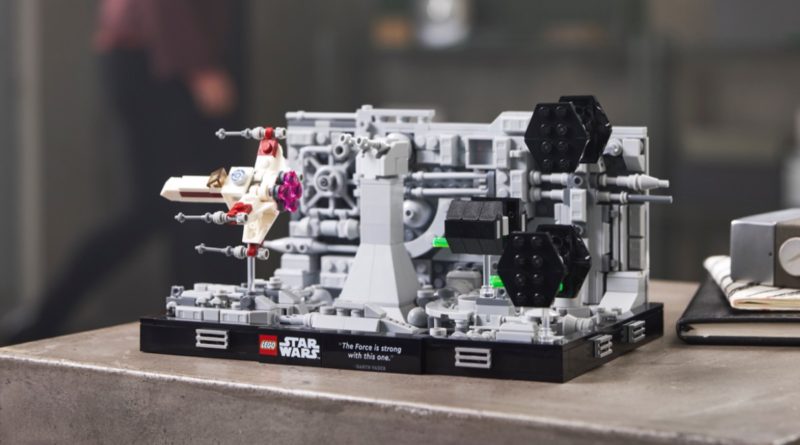 The LEGO Star Wars design team reveals all around the three new 18+ diorama sets, from the influence of live theatre to avoiding a weird green floor.

From how they decided on which quotes to use for each scene – all three sets are accompanied by a printed tile with a relevant quote from the Star Wars saga – to a huge coincidence in a certain dino-themed set also arriving next month, here’s everything you need to know about what went into designing the latest wave of 18+ sets.

How did you land on these three sets for this wave?

Jens: In this case we did some internal testing, so we asked some people about what their favourite scenes were.

Michael: It’s about trying to get as much feedback as possible. We’ll be keeping an eye on some posts as well about the different scenes on people’s minds. So yeah, things kind of added up to this line-up.

Jens: It’s also just me Googling ‘favourite scenes in Star Wars’ and then seeing what the response was there. So that’s a lot of inspiration from different sources.

Was 75296 Darth Vader Meditation Chamber a precursor to these sets?

Jens: You could call it the first diorama model. Of course, we are listening to feedback, [but] we also work so far ahead that we find it difficult to react, because we are really developing things almost a year before they’re actually being released.

Michael: I don’t remember ever thinking, ‘Oh, we’ll test the waters with this.’ But I think that when we saw the result was positive it was like, ‘Oh, yeah, I think we’re on to something.’

Are these sets intended for a different kind of consumer to the UCS sets?

Michael: We do recognise that maybe somebody that is reluctant to go all the way to the UCS [sets] might take this as a starting point, to either get back into LEGO Star Wars or to get into LEGO Star Wars. And then hopefully [they] would want to take a step to the bigger models later.

These three sets take a similar approach to 76956 T. rex Breakout, with a display base and quote. Did the Jurassic World and Star Wars teams collaborate over that style?

Michael: We weren’t collaborating as such. Sometimes we hear about what’s going on in another department, and we’ll put our heads together if it makes sense. But the development of one concept wasn’t dependent on the other. This is a coincidence.

Michael: One of the things I would [point to] is just the assortment of elements. We always have to be careful with a younger audience that we don’t provide too many elements that can be mistaken for other elements, and cause a disappointing experience in the build because you’ve chosen the wrong element. Here, we can take more liberty, it’s an open palette as far as colour and elements that look like each other – we’ve got a little more room to work with.

Jens: That’s also something that’s pretty clear on 75329 Death Star Trench Run Diorama. It’s building in all directions [with] a lot of small pieces in grey. That is something that we would not do in a model for children.

Michael: We would never do an entire surface of water with 100 different 1×1 tiles for kids.

How did you choose which quotes to use for each scene?

Jens: Specifically [for 75339 Death Star Trash Compactor Diorama], we were talking about ‘One thing’s for sure, we’re all gonna be a lot thinner.’ That’s funny, if that’s what you think of when you are about to die. We thought that that was hilarious. So that had to be the quote for that set. But it has to be something that you can just hear them say that in the specific scene.

Michael: We didn’t try to make any rules that are going to make the future difficult for us in any way. But everything has to be approved by our IP, our partner, so I think it’s just whatever triggers most people’s memory when they see that scene. And if that fits, then we’re good.

Michael: We’ve had positive feedback from those sets. And I think the reason that they’ve been great for the purpose that they have served is because they are very niche, and they appeal to real Star Wars fans. We tried to choose something that would really work well for the collector in those situations, where these [diorama sets] might have a much broader appeal.

Jens: It has been a huge thing for us to figure out the scenes that you would instantly recognise and create these memories.

How did you land on using so many 1×1 tiles for the swamp in 75330 Dagobah Jedi Training Diorama?

Michael: In our subconscious when we’re looking at anything LEGO, we are aware that the stud represents a grid dimension. And we did experiments, we had larger tiles, [but] it just looked wrong, and looked like a green floor. It didn’t look like brick-built water. When we reduced it to the ultimate building block of LEGO, being the one stud, it all came into play. And it just seemed like this is the LEGO language for water.

How did you achieve the compacting mechanism in 75339 Death Star Trash Compactor Diorama?

Michael: I think the breakthrough was when we had the idea to work with it like you do the scenes in live theatre. If you imagine a nautical scene in live theatre, where you’ve got waves and a ship that’s bouncing through the waves, and the way they do that with moving different sets in front of each other.

That was the inspiration I had for doing this, because you have to have something that’s going to stay in place and be organised – otherwise the function might jam when you activate it – but at the same time it has to look like a mess, because that’s what’s in the trash compactor. So that organised chaos was the challenge.

These three sets all come in at under $100. Can we expect bigger dioramas in the future, or are these specifically designed to be more affordable?

So you’re following the approach of Creator Expert in a sense, trying to bring in new fans rather than catering explicitly to hardcore adult fans?

Michael: Yeah, I mean, we’re not consciously trying to alienate [anyone] or focus on any one group. We’re just trying to be as inclusive for everyone as we possibly can.

All three new LEGO Star Wars diorama sets are available to pre-order now at LEGO.com in the US, while 75339 Death Star Trash Compactor Diorama and 75330 Dagobah Jedi Training Diorama are up for pre-order in the UK and Europe.

Consider supporting the work that Brick Fanatics does by purchasing your copies using our affiliate links. Thank you!