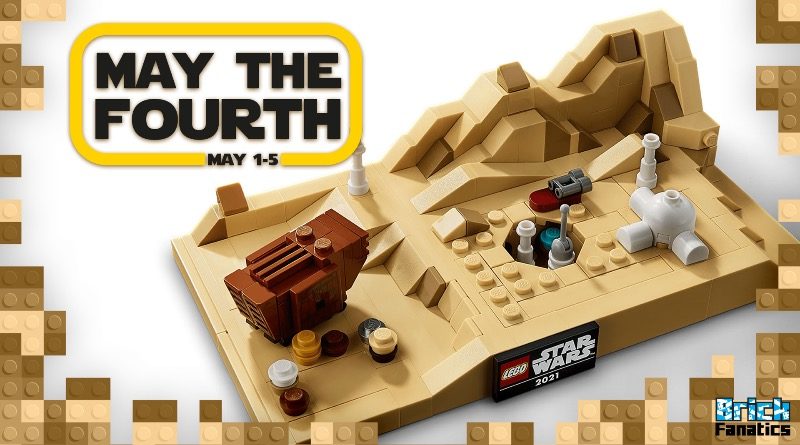 This year’s LEGO Star Wars May the Fourth celebrations are now well underway, with new sets, free gifts and double VIP points available at LEGO.com and in LEGO Stores.

May 4 – or unofficial Star Wars Day – falls on a Tuesday this year, which means the LEGO Group’s weekend of celebrations kicks off even earlier than usual. From today through May 5, you’ll be able to take advantage of a number of deals and promotions through official shopping channels.

For instance, an £85 / $85 / €85 spend on LEGO Star Wars sets will qualify your order for 40451 Tatooine Homestead, this year’s microscale gift-with-purchase from a galaxy far, far away. Click here to see why the promo model is well worth your time, and perhaps more so than last year’s 40407 Death Star II Battle.

Picking up this year’s first LEGO Star Wars direct-to-consumer set will take you to that qualifying threshold all by itself, as the newly-launched 75308 R2-D2 rings in at £179.99 / $199.99 / €199.99. But even if Artoo doesn’t float your boat (pilot your starfighter?), there’s plenty more to choose from at LEGO.com, with the inventory issues of 2020 mostly ironed out by now.

That makes this weekend a great time to catch up on sets like 75292 The Mandalorian Bounty Hunter Transport, particularly given you’ll also earn double VIP points across all LEGO Star Wars purchases – equivalent to 10% cashback in vouchers to spend on future purchases (or exclusive, limited-edition rewards).

Finally, LEGO Stores will be giving away a free 30388 Imperial Shuttle polybag with a £40 / $40 / €40 spend. That offer isn’t available online, so you’ll need to do your shopping in person to pick it up. Whether that freebie is worth braving the crowds for is another matter entirely…

Check out our dedicated May the Fourth page for a complete rundown of everything happening this weekend, and support the work that Brick Fanatics does – including bringing you news of these deals – by purchasing your LEGO through any one of our affiliate links.