The previously cancelled promotional polybag, LEGO Star Wars 5005376 Darth Vader Pod, will be given away with qualifying purchases in April.

5005376 Darth Vader Pod will be free with [geot exclude_country=”United States”]LEGO Star Wars[/geot][geot country=”United States”]LEGO Star Wars[/geot] orders of $60 or more at shop.LEGO.com from April 13 until May 3. The set was originally due to be a free item during December, but was unexpectedly cancelled – whatever the safety concerns were must have been rectified, as the Brick Fan confirms that the pod is listed on the LEGO Store April calendar. 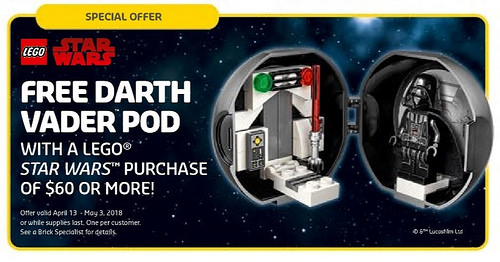 The 5005376 Darth Vader Pod promotion coincides with the release of the Solo: A Star Wars Story LEGO sets, which will make it easy for collectors to reach the $60 threshold.