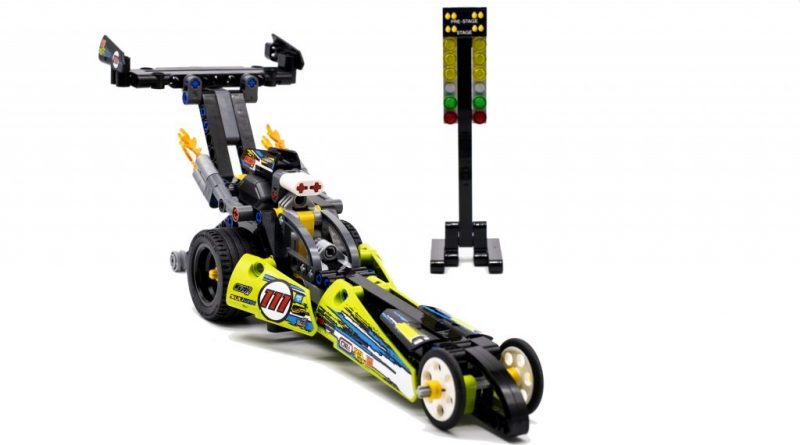 The first LEGO Technic dragster was released way back in 1997, since then there has only been one other Technic set featuring the fastest race cars in the world – and that was over 20 years ago. It’s high time that Technic fans were given an update.

Like most Technic vehicles, the build begins by constructing the framework to which the dragster’s body parts are then added. It’s a straightforward process that fans used to LEGO Technic will find simple but offers those new to the theme a great introduction to the unique building techniques.

The pull back motor is added to the build fairly early on and is attached to the back of the car. It’s quite a big and bulky piece but integrates well thanks to the overall shaping of the drag racer. Long and thin at the front with a huge engine piece at the back, it is perfect for hiding the large pull back motor. Not only does it look accurate but helps fill in any gaps at the back of the finished model.

While the front of 42103 Dragster is very easy to construct, the back end offers a slightly more satisfying experience with a variety of Technic bars of different shapes and angles going together to form a fairly complex looking rear end. It consists of a raised cockpit, giant rear spoiler and four exhaust pipes with Trans orange flames attached to each, giving the model a sense of movement, even when stationary and on display.

The overall shaping of the dragster looks very close to its real life counterpart. The curved nose at the front, achieved using two 3×5 L-shape pieces, big chunky wheels at the back and four Bright Green Panels, two on either side, make up the body work. Attaching the panels is actually a very satisfying stage of the build with really smart angles achieved through the use of angled double bent lift arms and angled axle and pin connectors.

As with most Technic sets, stickers are applied onto the various panels, which add a lot of detail and really enhance the finished look of the vehicle. The final design looks fantastic with the dragster feeling like the big powerful car it is. The colour scheme of lime green and black looks very striking and overall it’s a very pleasing model to build.

Unusually for a Technic set of this size there is also a small brick built starting light assembly to construct. It looks incredibly accurate, despite the simplicity of the build, and is not only a nice bonus but looks great when placed next to the dragster. It is a welcome addition that hopefully means fans will see similar additions in future sets.

The pull back motor function has worked incredibly well in past sets and this is no exception. In fact it’s so quick that a small wheel is attached to the back to help give the dragster stability when it’s first launched. It’s quick, easy to use and most importantly extremely fun.

This is a really fantastic little set. While it won’t offer too much of a challenge, the build experience is still enjoyable. The finished model looks excellent and is bigger than expected. The starting lights are a welcome addition and the play feature not only works but is immensely fun to use. Best of all, it all comes at a price that is great value for money and could tempt any fans wanting to dip their toe into the world of LEGO Technic.

42103 Dragster is available now at LEGO.com. You can help support Brick Fanatics’ work by using our affiliate links.