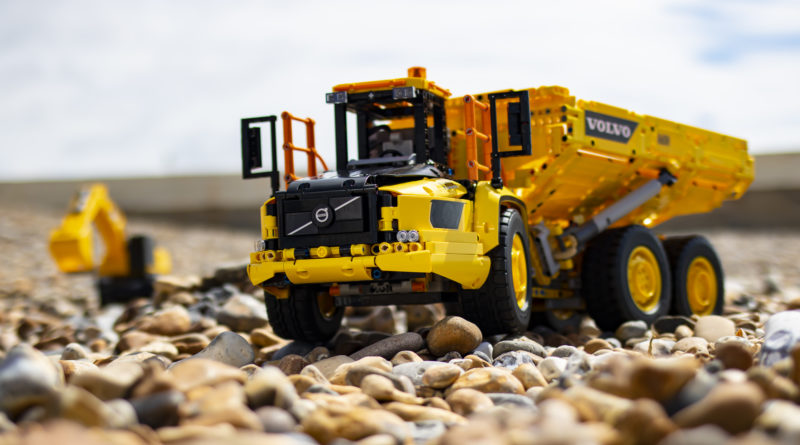 A huge box contains 2,193 pieces spread across 17 bags. Also included are six large tyres, a fairly hefty instruction manual and all of the necessary components needed for the LEGO Technic Control + functions (a large angular position motor, an XL motor and a large motor with a Bluetooth controlled Smart Hub). After removing everything from the box and spreading it across a table it’s pretty obvious fans are going to be in this for the long haul.

The build starts out with the construction of a fairly complex internal gear system. In a first for a LEGO Technic set, this gear system is fully automatic and motorised. It’s an exciting prospect but one that requires a lot of work to assemble. The gear system is built into a fairly compact area but with a lot going on inside. A decent level of concentration is needed as it’s quite easy to attach a pin connector or axle to the wrong hole.

A number of sub assemblies made up of axles and cogs of various sizes eventually connect together to form a pretty sizeable mechanism. The differential systems introduced in the 42109 Top Gear Rally Car are once again used here for powering the wheels, four 12t gears and added to a circular housing before a larger red gear is placed on top. It’s a relatively new technique but one that certainly peaks interest in both design and function. Already at this early stage this set is shaping up to be one of the more complex Technic sets that have been released in the last few years.

Once the internal mechanisms have been constructed the process moves into more familiar territory with the construction of the large chassis. The second bag focusses on assembling the truck’s cabin and the first stages of the bonnet and engine. While not as mentally challenging as the first stage it’s still an enjoyable and fairly involved process.

With the cabin built the truck starts to take on a more familiar shape (although at this stage, with only the bottom half of the bonnet, it resembles an aquatic duck bus) and for the first time the full scale of the model is evident – the final length is 60cm.

The model has an impressive amount of functionality and the motors are well integrated into both the rear of the chassis and the front, underneath the cabin. The control hub is clipped onto the rear of the cabin. Silver piping and orange guard rails are also attached onto the control hub, further integrating it into the model. The only drawbacks are the visible cables, which need to be tucked behind and inside the cabin.

The button to activate the control hub’s bluetooth is positioned in a fairly awkward position to be able to easily turn on but the designers have come up with an ingenious solution. The trans-clear 2×2 round brick on top of the truck’s cabin is not only an accurate recreation of the A60H’s light but it’s connected to a small arm that when twisted turns the bluetooth on – it’s a fantastic little feature.

The construction of the engine and bonnet appear fairly straightforward but there is an incredible amount going on both underneath the hood of the truck and the structure of the bonnet itself – this really is a set that feels deeply involved at every stage.

The engine is impressively detailed and it seems somewhat a shame to cover it all up but the designers found a way to be able to reveal the innards of the vehicle as and when needed. The bonnet is made up of three main sub assemblies – the two sides, the front and top, which are held together by a single axle that goes through the middle of the front. This can be easily pulled out allowing the whole bonnet section to flip open revealing the detailed engine within. It’s nice to know you can look back on the amount of work that went into the internal structure of the machine.

The final stage turns the focus onto the giant back loader. Out of all the other stages of the set, this is the part that feels the most comfortable and typical of a Technic set. Thirty five large Technic panels connected with pins and axles form a giant structure that sits neatly on the back. With the Technic Control+ functionality, the whole back section can be raised and lowered.

The finished model has a large, heavy and very imposing look, just like its real life counterpart and the yellow colour scheme is both striking and accurate. Nice levels of detail are added to the cabin using system bricks to represent stairs, cabin lights, large wing mirrors and the orange guard rails that surround the cabin’s side (adding a welcome splash of colour). Those features are very simple, but all effective and help to give the finished model even more accuracy.

Further detail is added through the use of stickers, a mainstay in Technic sets, but mercifully there are only 27 to apply – not bad considering the set’s size. They look fantastic, especially the side engine vents, lending lend even more realism to the model.

With the exception of the opening bonnet, the rest of the set’s functions are controlled through the Technic Control+ app. At the time of writing, the app was not available to test. The app will allow the model to be moved forward and backwards, steered from side to side and operate the back tipper, lowering and raising as needed.

Based on experience using the app with other sets, those with smaller fingers will have more success as the on screen controls can prove a little fiddly at times, if your finger slips even slightly off, the truck comes to a halt. It’s not perfect and a more conventional remote control would be welcome in these sets.

42114 6×6 Volvo Articulated Hauler will make a great addition to any Technic fan’s collection. It’s build that feels deep and involved at pretty much every stage. Impressive mechanics, including the automatic gearbox, will help to inspire budding engineers and the Technic Control+ functions should be a lot of fun to use.

The finished model looks incredibly lifelike and is very accurate to the real life truck. It’s probably not a set for those new to the theme as it can be very technical in places, but fans familiar with LEGO Technic will no doubt get a lot from this set.

42114 6×6 Volvo Articulated Hauler will be available from August 1 at LEGO.com. You can help support Brick Fanatics’ work by using our affiliate links.