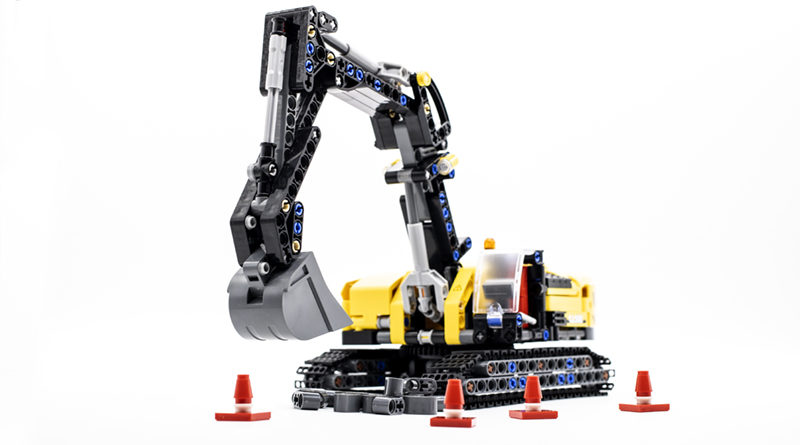 It’s almost an unwritten law that with every Technic wave there must be at least one construction vehicle. LEGO Technic 42121 Heavy-Duty Excavator continues that trend, but will this compact Earth-mover be digging for glory, or left stuck in the mud?

LEGO Technic and heavy-duty construction vehicles were made for one another. The robust construction techniques and mechanical look of Technic suits the likes of cranes, diggers and excavators perfectly. The more recent offerings have included some large-scale sets that retailed at the higher end of the market, but 42121 Heavy-Duty Excavator is much more affordable.

The question now is: will that reduced price mean reduced functionality and overall quality?

Seasoned Technic aficionados will know that nearly every set begins with the construction of a vehicle’s framework, which is why it’s a pleasant surprise to find that this excavator’s build starts by constructing the large moveable arm and dark grey bucket (new in that colour for 2021) used for the digging function.

Despite the simplicity of the mechanism, the assembly of the arm itself requires some concentration. There are a lot of Technic pins connected within close proximity of one another, and if you’re not completely paying attention it can become a little confusing.

Once the arm is completed, the next stage is to build the main body, which is a compact yet simple design. Somewhat disappointingly, stickers are used to decorate the rear of the vehicle. That’s not uncommon in Technic sets, but the sticker design also extends to the rear lights. Lights are one part of a machine’s features that are very easily achieved with System parts, and relying on stickers slightly cheapens the look.

At the front of the excavator there are two brick-built lights, so it’s strange the same wasn’t applied at the back too. Aside from that, the body comes together incredibly quickly using just a few panels attached to lift arms to create the shaping.

The size of the excavator feels a lot smaller than expected. From the box art it looks like it should be a lot meatier, but the entire body can easily be gripped with just one hand. This does make it easier to display, store and play with, though, as it doesn’t take up as much space as some of the larger Technic models of this style.

None of the build is particularly challenging, but the tracks are a fairly laborious process. Eighty-six individual pieces are connected to one another to form the caterpillar tracks. It’s time-consuming, but once attached they do look very accurate. They connect to the underside through a rotating turntable, giving the model a lot of manoeuvrability.

Despite its size, 42121 Heavy-Duty Excavator is finished off really well, with very few (if any) gaps around the bodywork. The remaining stickers add interesting and accurate details, and there’s a nice use of System bricks to represent various air intakes and engine parts. The most interesting aspect is the cab’s seating area and controls: a 1×3 red plate, 1×2 curved slope, two hose nozzles and a sticker combine to make a neat little sub-assembly.

Not only does the set contain the excavator model, but there are also four brick-built cones and 20 dark grey Technic 1×2 lift arms to represent the bricks or rubble for the excavator to scoop up. It’s a nice touch and adds to the play value and display of the set. Saying that, it’s not the easiest of diggers to operate and does take a few goes to really get the hang of it.

As this is a Technic set, there are no minifigures included.

42121 Heavy-Duty Excavator isn’t as large as some of the other Technic sets that have tackled this type of machinery, but it certainly isn’t lacking as a result. It maintains some entertaining functionality, looks great and, although not as deep and involved as some other sets, the build is still an enjoyable process.

Some may be a little disappointed with the overall size of the finished model, but at this price it seems like a decent deal for what you get.

42121 Heavy-Duty Excavator is a pretty decent model. It looks compact and complete. The mechanisms to operate the digger and arm are well-integrated, with one gear at the back controlling the vertical movement and one gear at the side to operate the claw’s movements. Tracks are always a joy to watch in motion, even if they are a chore to connect, and having the body on a 360-degree rotating plate adds to the overall play value.

It is smaller than expected, but that can be seen as a positive. It offers similar functionality to much larger vehicles of this type, but doesn’t take up masses of space on the shelf. The finished model looks excellent, the digging feature is fun to use (once mastered) and it retails for a very respectable price. Overall, 42121 Heavy-Duty Excavator is a set we really… dig. (I’ll get my coat.)