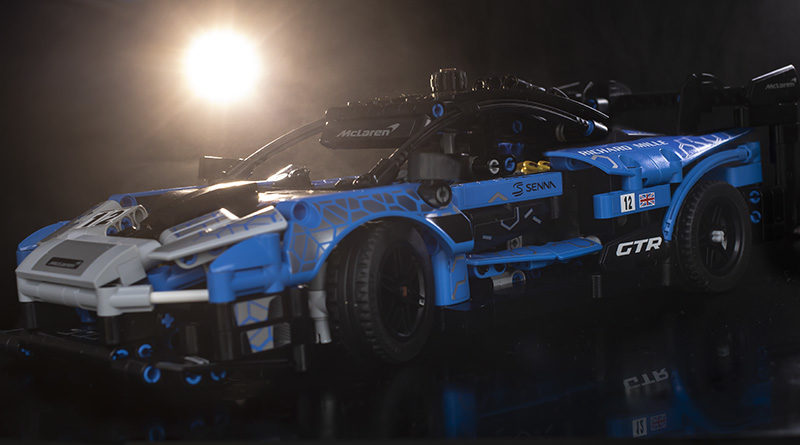 LEGO Technic has a supercar to suit every budget in 2021, but can 42123 McLaren Senna GTR satisfy builders at its smaller price point?

The McLaren Senna GTR is billed as a game-changing track car, clocking in the fastest lap times outside of Formula One. It’s an utter powerhouse of a machine. At only 12 inches of length, 42123 McLaren Senna GTR will have its work cut out to do the real automotive icon justice.

The LEGO Group has transformed iconic supercars from the likes of Lamborghini, Porsche and Ferrari into incredibly polished and well-respected Technic sets, but 42123 McLaren Senna GTR marks the first time the company has recreated a McLaren motor vehicle as a fully-fledged Technic model.

It’s designed to be of a similar scale, and price range, to 2019’s 42093 Chevrolet Corvette ZR1, but this McLaren offers nearly 300 more pieces and measures just over an inch longer. However, unlike the Corvette, the McLaren Senna GTR has an incredibly unique silhouette and very distinct shaping, which surely gave the LEGO designers a real headache when attempting to recreate the sports car’s look. But just how successful were they in achieving that goal?

Opening the box, after admiring the stylish box art, will produce just three bags, four tyres and an extensive sticker sheet. Those familiar with Technic will know most of – if not all of – a Technic model’s detail comes from stickers and they really do add a lot to the finished look, so there are no complaints with the amount on offer here. In fact, compared to the real Senna GTR’s livery the level of attention to detail on offer is highly commendable.

This is an officially-licensed product designed with McLaren’s close supervision, and as such it would have been nice to include some information about the vehicle inside the manual. There is a tiny bit of info on the back of the box – a four-litre twin turbo V8 engine, a top speed of 200mph and 0-60 in just 2.8 seconds – but just a little bit more in the manual would have helped set the scene for the automotive stalwart that’s about to be built.

That aside, the build begins as expected by constructing the framework and the V8 engine, which forms part of this set’s play features. When the vehicle is pushed along the pistons of the engine move up and down thanks to the cam shafts, which are connected to the wheels using a couple of eight-tooth gears, a very simple and common feature of most Technic vehicles. Front wheel steering and opening wing doors complete the set’s working components.

Compared to similar models of this type and size, the framework is actually quite rudimentary, assembled from only a few large Technic lift arms and L-shaped lift arms. It’s an enjoyable process, although it comes together surprisingly quickly. It’s a very basic start to the set, and does make you wonder how and where the 800 pieces will be utilised. It doesn’t take long to answer that question, though, as the apparent simplicity of the framework construction is juxtaposed with a much more complex, and sometimes inspired, bodywork build.

Recreating the sleek, smart lines of a supercar at this scale is usually achieved through larger, curved Technic pieces. In order to achieve the distinctive shaping of the roof and canopy, the designers have here opted for angled lift arms with staggered joints to create a sloped roof. It’s not only accurate, but also very clever. The distinct shape of the canopy is just one of several features of the Senna GTR that have been masterfully recreated.

The rear lights – an iconic and instantly recognisable feature of the McLaren – are built using two red lightsaber blades inserted into Technic pins. The back grille is constructed from a 2×8 plate with eight 1×2 black panel pieces, which is rudimentary but effective. And the rear wheel arches are equally as inspired: rather than using standard wheel arches, Technic hoses are connected to make an A-frame shape, which then attaches to the sides and wraps right around the entire back of the vehicle. What begins as a very simple build soon turns into a set that offers up surprises and new building techniques around every corner.

The set involves quite a few sub-assemblies for various sections of the car, all of which are very enjoyable to construct. The front bumper sub-assembly in particular is incredibly satisfying to piece together. The light grey parts really pop against the rest of the blue and black colour scheme. Equally as smart are the front window sides and the rear spoiler, which is actually quite an involved stage, requiring plenty of concentration. This mainly comes from ensuring the stickers are placed correctly. It’s nerve-racking but highly satisfying to see all the livery lined up – if you get it right!

The front lights are another unique design. Rather than trans-clear 2×2 round bricks or flat tiles, the front lights are constructed from four 1×1 slopes staggered at different heights. They slot into the front frame, and when covered with the body produce a subtle yet realistic look. The wing doors – or to use their correct name, the dihedral doors – also integrate into the model seamlessly. They are not the most graceful of things to operate, however, and perhaps could have been strengthened somehow to give them a more fluid and stable operation. Out of everything they are probably the weakest element to the final model. But considering there are 830 pieces, to have just one negative speaks volumes about the enjoyment of the entire build.

Once finished, the model looks sleek, stylish and pretty much captures the essence of the real sports car. The decals and livery (some printed, most stickers) really help with the finished look, and the iconic colour scheme of blue, black and grey looks incredibly striking.

This is a Technic set, so there are no minifigures to see here. Move along.

42093 Chevrolet Corvette ZR1 is the closest set to this and comparing the two, the McLaren GTR has nearly 300 more pieces, is over an inch longer and is only slightly more expensive, which already seems like good value. The build is incredibly enjoyable and the finished model looks excellent. In terms of accuracy and elegance, it’s head and shoulders above the aforementioned Corvette. There are of course far larger, and more expensive, Technic supercars on the market, but if your budget can’t quite stretch to those then this is a very viable option.

LEGO Technic 42123 McLaren Senna GTR is a surprising set, in a good way. From the humble beginnings of the basic framework grows an incredibly joyous experience. Even seasoned Technic fans will find new and interesting techniques scattered throughout the build. Inspired sub-assemblies and parts usage are a key factor in helping this set stand out, and if the LEGO designers felt they had a challenge on their hands to recreate the iconic and unique silhouette of the GTR, then they have certainly risen to it.

While it’s not as complex as other Technic sets, and the play features are admittedly somewhat lacking (the working engine, movable steering and opening doors is all there is), it’s still such an enjoyable thing to put together that those foibles are quickly overlooked.

If Technic sports cars are your thing, then you definitely need to make space in the LEGO garage for this beauty. If you are someone looking to dip their toe into the world of Technic then this would make for a fantastic first-time purchase.

42123 McLaren Senna GTR is available now at LEGO.com. Support the work that Brick Fanatics does by purchasing your LEGO through one of our affiliate links.