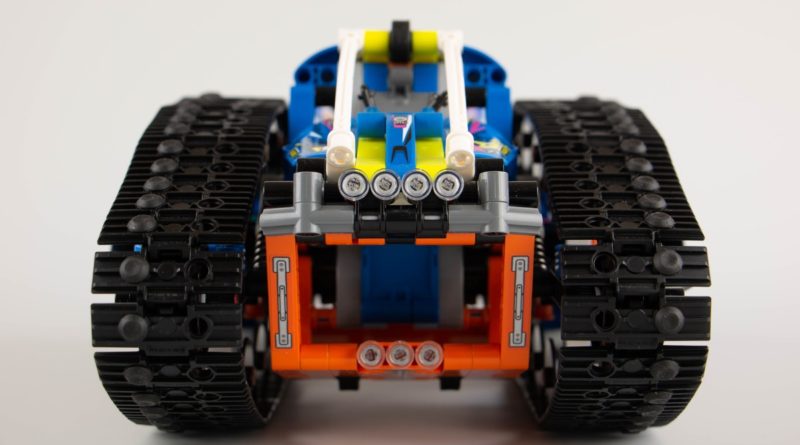 Reality is overrated, so come take a spin in the new LEGO Technic 42140 App-Controlled Transformation Vehicle – or should that be ‘vehicles’?

Technic is a theme that, by and large, is rooted in the real world. Sets tend to be either recreations of generic vehicles – cranes, helicopters, bulldozers and so on – or, increasingly, licensed replicas of actual vehicles, such as the recent 42130 BMW M 1000 RR.

Occasionally, though, something comes along that has leapt purely from the designer’s imagination. That said, looking at 42140 App-Controlled Transformation Vehicle, we wouldn’t be that surprised if Elon Musk had something like it stashed away in an underground bunker deep inside an extinct volcano…

This is a set that confounds expectation, starting with the box. On the front, there’s an image of a bright orange tracked vehicle that looks like it would be at home in an Arctic research station. Then you flip it over to look at the details on the back and you find yourself looking at another – different – box front.

This time, the image is of a bright blue and fluorescent yellow tracked racing… thing. Sure, the two look like they share plenty of common features, but then you see an image in the corner that shows the vehicle flipping over. And you look at the cab of the Arctic vehicle and think, “Surely, if that flips over, it’s going to be lying there, beached, like a turtle on its back.”

Major design flaw? Or might there be more to this set than meets the eye?

Most Technic sets, other than the entry-level models, tend to start with an engine or gearbox. In this case, as we’re looking at a battery-powered set that uses the CONTROL+ system, the build starts by attaching a couple of motors and a battery box to a frame. Within half an hour or so, you have what could, if you were to squint quite a lot, be the start of a ‘50s hotrod, with large driven wheels (though no tyres) at the back and smaller wheels at the front, on the sort of chassis that is basic enough that it could have been knocked up in a garden shed.

Soon after, as bag two is opened, some bodywork starts to appear, in most un-Technic-like colours.  Buried away inside there have already been a couple of 3×3 connector beams in violet and bright green, which look like they’d be more at home in a Friends set than a Technic vehicle, and then you’re constructing a canopy in bright blue and fluorescent yellow. Normal service resumes as you flip the chassis over and start building a different cockpit in a more traditional orange.

That nagging feeling of ‘How on earth is this going to work?’ comes back as you attach the bodywork to the back of the chassis, at which point the designer plays a masterstroke. A couple of shock absorbers are added at the front of the vehicle. Big deal! It’s a Technic vehicle, shock absorbers are nothing new, right? But as they’re connected up, you realise what’s happening.

Instead of the body being fixed in relation to the main structure, it’s hinged at the back and the shocks allow it to see-saw up and down. Not only do the shock absorbers act in the traditional sense and provide some comfort and protection to the driver, but if the vehicle is inverted, they compress enough to allow the body to move up and down, thus avoiding the “beached turtle” scenario. Small rollers on the top of both of the cabs mean that the bottom section won’t snag on the floor under compression.

Bag three finishes off the minimalist bodywork and constructs the roller assembly that holds the tracks in place, and the build comes to a slightly repetitive end with the construction of the tracks themselves from 96 pieces (plus 96 rubber studs for traction). Along the way you’ll add 31 stickers, which are all fairly easy to place and add a welcome splash of detail and colour.

It’s a fun build and a fun idea, but let’s face it: this is one set where the build is secondary to the whole ‘turn it on and take it for a drive’ thing.

Fire up the CONTROL+ app, power up the vehicle, wait for a short firmware update and you’re away. The controls are simple enough – two sliders control the left and right tracks and after you’ve proved to the app that you’re able to drive it both forwards and backwards it’s time for the party trick. “Drive into a wall,” suggests the app, “to flip your model.”

And it works. It works really well. In a neat touch, the controls, which were orange to match the cab, switch to lime green as the vehicle flips over and the futuristic racer takes over. All the while the phone or tablet that you’re using to control it is playing some industrial sounds that match the actions of the vehicle and, because you’re concentrating on driving, it’s not too much of a leap to imagine that it’s coming from the set itself. Meanwhile, the studs that you laboured over ensure that it has excellent traction on both carpet and hard floors.

It’s not the fastest vehicle ever created. It’s possible that the modding community will be reaching for their bucket of gears to speed it up, but given that most people will be using it in the limited confines of a living room or bedroom we think it’s just fine as it is.

It will be a strange day indeed when a Technic set comes with a minifigure. Please don’t write in about the Technic figures that were introduced in the late ‘80s, as they aren’t minifigures! Or, y’know… do! We’re always pleased to hear from readers.

With its garish colours and, erm, ‘alternative’ looks, it won’t be taking pride of place on many display shelves, but chances are that’s because it’ll be tearing around the living room carpet. Just don’t forget to factor in the cost of the batteries.

From the outside, 42140 App-Controlled Transformation Vehicle doesn’t look like it has much to offer Technic purists. It uses the not-universally-admired CONTROL+ system. There’s not a gearbox in sight. No engine. No differential. We searched high and low for cogs and worm gears but none did we find. There’s very little that could be described as a traditional ‘function’ at all. We looked at the box and were reminded of the novelty remote-controlled toys that used to appear in mail order catalogues back in the 1970s. That’s the level of first impressions we’re talking about here.

But no sooner have you started to construct it, than this set starts to win you over. It’s not the most complex build you’ll ever attempt, but it’s a fair challenge over a few hours that – caterpillar tracks aside – you’ll enjoy. Credit has to go to the designer for some really neat ideas. The swinging body mechanism is audacious enough to put a smile on your face, but there are smaller touches too.

The blue and yellow ‘racer’ side has a raised spoiler that would catch on the ground while it’s upside down, save for a neat trick that lowers it as the vehicle flips over. We were grumbling the first time we went to switch the battery box on, as the switch is difficult to get a fingertip to, and then you realise that what appeared to be a minor decorative touch is in fact an accessible lever that allows you to power it up without trying to squeeze your hand in.

It may be that the novelty of driving about and flipping the vehicle over will wear off. But we’re pretty confident you will have gone through a lot of batteries first…

Any LEGO purchases you make via our affiliate links helps to keep Brick Fanatics up and running. Thank you for your support!

How long does it take to build LEGO Technic 42140 App-Controlled Transformation Vehicle?

A fairly straightforward build, it takes around four hours to put 42140 App-Controlled Transformation Vehicle together. It’s not difficult, but you will find some innovative techniques along the way.

How many pieces are in LEGO Technic 42140 App-Controlled Transformation Vehicle?

42140 App-Controlled Transformation Vehicle consists of 772 pieces across five bags, plus a sheet with 31 stickers. You’ll also need six AA batteries, a small Phillips screwdriver to open the battery box, and a suitable phone/tablet to run the CONTROL+ App.

42140 App-Controlled Transformation Vehicle is a chunky beast at 26cm long, 20cm wide and 12cm high (whichever way up it is).

How much does LEGO Technic 42140 App-Controlled Transformation Vehicle cost?