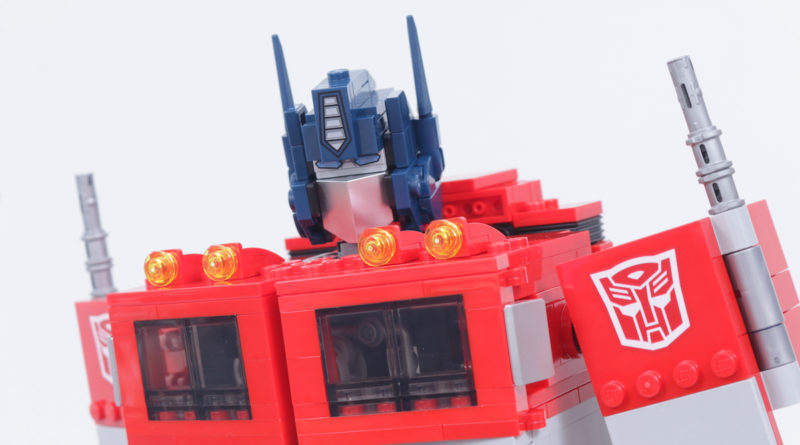 LEGO Transformers 10302 Optimus Prime is probably one of the most unexpected LEGO sets of all time, and certainly one of the highlights of 2022.

The LEGO Group and Hasbro are rivals. These are two of the world’s largest toy companies and they aren’t meant to work together. LEGO Transformers was always meant to be the pipedream of a crossover we all hoped would happen but knew deep down was never possible.

Yet, for reasons that both fascinate and will likely forever remain confidential, the LEGO Group and Hasbro have quite remarkably worked something out, come together and produced the best 1980s-fuelled LEGO hit of nostalgia to come out of Billund so far.

One of Hasbro’s most iconic and successful properties, which is almost 40 years old, Transformers has spawned numerous comics, media, cartoons (including the first one with the very best theme tune ever created and an unrivalled voice cast), an original feature-length film in 1986, and in more recent times one of the highest-grossing movie franchises of all time. It is now also a LEGO licence.

Whether we only ever get the one LEGO set from this partnership or it is the start of something more, there’s just one suitable character to kick things off with – Optimus Prime.

Leader of the Autobots, and seemingly forever locked in battle with nemesis Megatron and his Decepticons, Prime is the archetypal hero, always on hand to rouse his followers, complete the mission, and lead from the front. With the Matrix of Leadership within his chest, he is also the most powerful Autobot and is always front and centre of the action, even if he is reluctant to use force where not necessary.

Prime is an iconic character that has made for an iconic toy – to this day he has had the highest number of toys of any Transformers character, while anyone growing up in the 1980s and early 1990s will instantly recall the shape and design of that very first iteration, perhaps in part unwittingly so thanks to its mould being re-used dozens of times over the years that followed an original 1984-85 run on toy shelves.

It’s only appropriate that it’s this mould of the toy and this original, Generation 1 (coined for the original run of Transformers from 1984 to 1993) design of the character that serves as the inspiration for LEGO Transformers 10302 Optimus Prime.

Simple and blocky in appearance with the red torso and blue legs accented by chrome detailing, the original Optimus Prime toy was relatively small compared to the size of the character in the cartoon, with his transformation also fairly straightforward. His arms shifted back, his legs folded up and his head flipped forward into the chest cavity, to switch from robot mode to truck.

That simple design still caught the stoic nature of the character from the comics and cartoon, however, and captured the imagination of more than one generation of kids growing up.

Creating a larger-scale LEGO set based around this same concept faces the same challenges – build a 2-in-1 toy that offers credible robot and vehicle modes and maintains the key aspects that make Optimus Prime the character that he is.

Very pleasingly, LEGO Transformers 10302 Optimus Prime more than manages to do that, perhaps thanks in part to such a surprisingly large piece count for this set. 1,508 pieces can go a long way on a single build and – in the right designer’s hands here, where not a single piece has been wasted – have come together to masterfully capture the same spirit of that original 1984 toy, while also embracing some of the opportunities to modernise the design as per more recent versions of the Transformer toy.

10302 Optimus Prime is first and foremost a display piece, but one that can transform between robot mode and vehicle mode, in a way that is very similar to how the original toy did, and without – as otherwise may be the go-to LEGO solution – unbuilding and rebuilding the bricks and pieces. For this to all be possible and credible to expectations older Transformers fans will have, it’s a LEGO set aimed very much at adults.

Not every LEGO set to be given the 18+ age recommendation (and branding and marketing that come with it) has lived up to the tag or the hype, particularly when it comes to the actual construction part of the model. 10302 Optimus Prime, though, is one such set that does justify the adult label, thanks to a build that is full of advanced and new techniques. The character you are building may look boxy, but all that movement and those subtle changes of direction in bodywork, all combined with the ability to move and function as you would hope, are only made possible through some truly innovative LEGO design.

As mentioned, this is imperative, as much as anything for the key aspect to the LEGO Transformer – that it can still transform. While basing LEGO Transformers 10302 Optimus Prime off the G1 version of the character alleviates some of the pressure (the more modern versions of any of the Transformers tend to have complex, multi-stage, instruction booklet-requiring transformations), there are still several multi-directional mechanics required here. The design team were faced with creating a 2-in-1 model in the purest sense, without that usual go-to LEGO option of unbuilding and rebuilding.

The completed model actually hides a lot of the ingenuity behind Optimus’s bodywork that helps to achieve this feat, but it’s really rather remarkable just how effectively across different areas of the giant robot all the movements and twists and turns are there, allowing for a transformation that is as true to the original toy as you would hope for.

From robot mode, the transformation requires clipping the legs together, lifting up the lower torso flap and turning the torso around 180 degrees, before swinging back the legs and folding back the arms behind and underneath the truck cabin, all the while flipping the head backwards. It’s not quite the same, overly-simplified transformation that the very first 1984 version of Optimus Prime had, but it follows the same principles and borrows others from later iterations of the character’s toy.

Design considerations for aesthetic purposes also play a part, such as the direction the head folds. In the original toy, the front of the cabin/chest would open up for the head to flip into, but in the cartoon and with later toys, the chest actually opens up outwards from the centre, storing within it the Matrix of Leadership (the thing he’s holding up in the poster for the 1986 movie).

Importantly, while 10302 Optimus Prime transforms between two distinct modes so effectively, neither look to the character suffers as a result. Both the sentient robot and disguised truck mode look as authentic to the Autobot leader’s design as you would hope, benefiting from that vibrant colour scheme, selected printed parts on the face and arms, hints of drum-lacquered silver LEGO elements and, ultimately, the most careful LEGO design across what parts have been used where – and all with consideration to maintain scale and proportionality.

That robot and that truck look just as your younger self playing with the original toy will remember it, just as you recall Optimus as he was in the original cartoon. Once you complete building 10302 Optimus Prime, you can almost hear Peter Cullen’s voice emanating out: ‘Autobots, transform and roll out!’

LEGO Transformers 10302 Optimus Prime comes in at £149.99 / $169.99 / €169.99 and that’s no small amount. It means this isn’t necessarily a day one purchase, but rather one that will require some planning and some saving to acquire. That being said, it’s worth the extra effort on so many levels. If Transformers is your thing, or if great LEGO experiences and design are what drive you, or if you are lucky enough to love both Transformers and LEGO, this set delivers something incomparable. Some LEGO sets warrant their price tag without debate.

LEGO Transformers 10302 Optimus Prime is built so well, functions so amazingly and looks so accurate and true to the character that the surge of nostalgia here is almost overwhelming. There are plenty of other dips into 1980s and 1990s childhood currently available in LEGO form, but arguably nothing that is quite as emotive or authentic as this set.

Transformers is this utterly unique and unusual world that we never expected would be allowed to cross over into LEGO. That it is here alone is remarkable and if any of us before now had dared to dream of LEGO Transformers, 10302 Optimus Prime is exactly the dream we would have had.

Buy this set and start dreaming of more LEGO Transformers. This set shouldn’t exist, so who’s to say there won’t be more?

Support the work that Brick Fanatics does by purchasing your LEGO Transformer (yes, it’s really real) through one of our affiliate links – thank you!

How long does it take to build LEGO Transformers 10302 Optimus Prime?

LEGO Transformers 10302 Optimus Prime takes a good couple of hours to put together, thanks to a detailed and thorough build spread across 10 sets of numbered bags.

How many pieces are in LEGO Transformers 10302 Optimus Prime?

There are 1,508 pieces included in LEGO Transformers 10302 Optimus Prime, with parts for various accessories, such as his blaster, the Matrix of Leadership and an Energon cube.

How much does LEGO Transformers 10302 Optimus Prime cost?