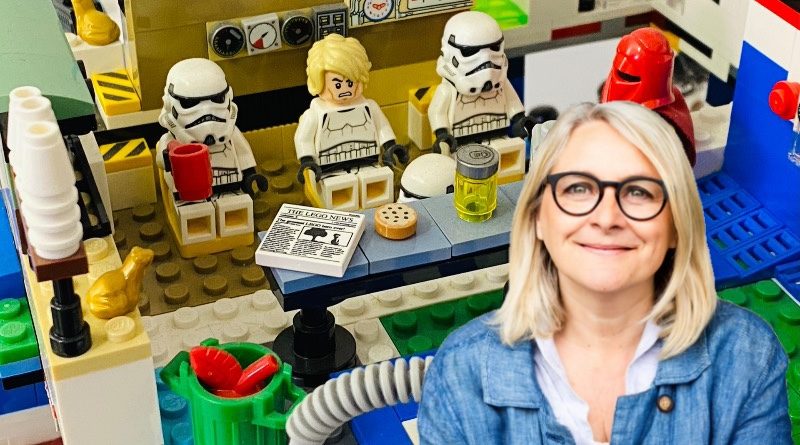 Author and screenwriter Emma Kennedy turns the dreary, grey galaxy of LEGO Star Wars into something vibrant and wonderful. Death Spa, anyone?

I have a golden rule in the LEGO Shed: no grey, thank you very much. But every now and then I side-eye a Star Wars set and feel my 10-year-old self’s heart pumping. I had a deep burning to make the Death Star and the enormous, heavier-than-a-Rottweiler Millennium Falcon but oh, the greyness. It’s like staring at a wet afternoon.

So instead of buying the sets, I bought the instruction booklets from eBay (word to the wise: they’re a fraction of the cost) and set about pimping my own version of those classic sets with not a patch of grey to be seen. The beauty of LEGO is that each set should be thought of as a guide; a springboard to creativity. Instead of the Death Star, then, I built the Death Spa.

There’s a canteen in the basement; C-3PO is administering Botox to a Stormtrooper in a treatment room while another Stormtrooper relaxes in a hot tub; there’s a karaoke bar where Luke and Leia are giving it their all and a stag do with one half-naked stormtrooper puking down a vent; there’s a disco with DJ Emperor Palpatine, a band room where Tarkin is getting down to Han Solo on the drums, and a VIP room where Vader and Obi-Wan are quietly chatting; and in the upper decks, there’s the Human Resources department, complete with biscuits.

I did the same to LEGO Harry Potter 75980 Attack on the Burrow, morphing it into a Father Christmas house with wrapping room and toy conveyor belt. My Millennium Falcon project is still ongoing – it’s going to be the Liza Minnellium Falcon, a vision of red and gold. I’ve just built her laundry room. There shall be nothing more fabulous in all of the galaxy.

If you come to LEGO late, as I did, there are retired sets that are now mind-poppingly expensive. We all have our favourite genres – my particular weakness is for Creator Expert modulars, and I found myself sweeping the internet trying to find a cheap 10211 Grand Emporium, but it was impossible. Unless I wanted to spend around £500 I could forget it.

The ground floor became the department store go-to for Harry Potter characters; the first floor became the place where superheroes could check out all the new capes and weapons; and the top floor became the hangout for viewers of my YouTube channel. I made minifigures of people I interacted with every day at @legowith, built them a dance floor and rooftop disco, a very niche vending machine and a scale version of my own LEGO studio. One person requested Sue Perkins being flown in via helicopter by Batman, so I made that happen too.

If you have a lot of LEGO, then why not give it a go? The last set I decided to build using my own bricks was LEGO Ideas 21318 Tree House. I got the instruction booklet, had a scour of the brick itinerary at the back, worked out what I needed that I didn’t have, slapped in an order to BrickLink or Toypro – I prefer Toypro for the simple reason I can enter in the piece number and then decide what colour I want it in – and bob’s your uncle: a totally unique, very own version of a beautiful set, and at a fraction of the cost.

It’s fun, turning an already beautiful thing into something that’s entirely yours. My Death Spa elicits astonished gasps from everyone who comes to the LEGO Shed, but all I had to do was follow the instructions (with no grey bricks) and simply decide what I wanted to turn each room into. It’s still the Death Star, but with a toilet and shower. Finally, I can stop worrying about Darth Vader needing a poo. So pimp up your rides, LEGO fans! And if you do, send me your pics. I’d love to see them.

One thought on “Making LEGO Star Wars less grey, one brick at a time”