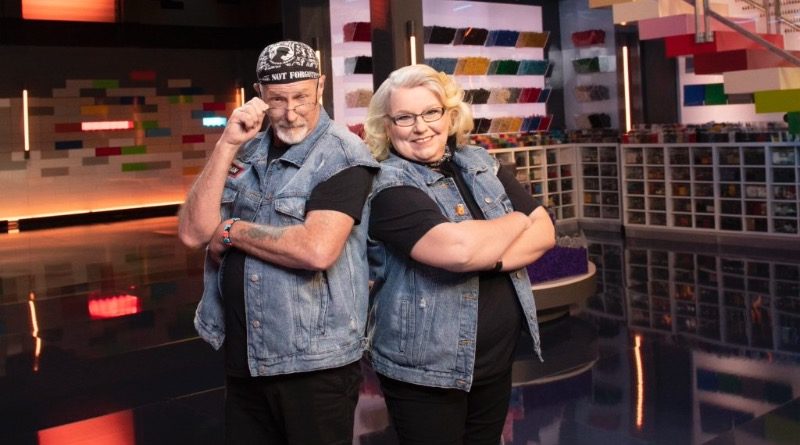 Siblings and veteran LEGO builders Jack and Dawn bring a wealth of experience to the table in LEGO MASTERS USA Season 2.

The competitive brick-building show returns to screens on June 1 at 8pm ET / 9pm PT on FOX, with 12 pairs of contestants vying for the grand prize of $100,000 and the title of LEGO MASTERS. Ahead of the first episode, LEGO Fan Media including Brick Fanatics had the chance to catch up with all 24 contestants, including siblings Jack and Dawn.

What got you both hooked on LEGO?

Dawn: When I was younger, it was considered a boy’s toy at the time. I didn’t fall into a lot of different moulds, and it didn’t have to be ‘boy versus girl toy’. So I have my Barbies, and I use LEGO to build something for the Barbies. But I had to take Jack’s LEGO to do that because it was not something that we were expected to be playing with, so it was his Lego to start with.

I came out of my dark ages – actually, I blame our sister. My husband and I went to see my sister and her husband and family during COVID, and she does her pillow squares. And so I sat at her desk and I made quilt squares with her. Well, I got home and I had to make more quilt squares, and that’s what brought me out.

Jack: For me, it was the flexibility of building with LEGO. I could make buildings for little cars, I could make bigger things like bridges – I can make anything. It was an outlet for my creativity and my imagination. And I have a pretty vivid imagination sometimes. It worked out real well.

Dawn: Yeah, I think heart and creativity was really our superpower. We brought in the family element – although I know there were a lot of siblings, we’ve been family longer than any of the other pairs!

What is your signature style, and how did you infuse that into your builds?

Dawn: I would say we are – in a very scary way – on the same wavelength, quite frequently. I mean, we will come out of hotel rooms wearing the same shirts. When we had to do our team build here, he came out of the shower, I came out of my room, and we were wearing the same shirt. I didn’t know he had that shirt, and he didn’t know I had that shirt! We were already on the same wavelength in so many ways. And I think it carried over into our builds and our ability to be a team that way.

Jack: We grew up in a creative household, and I think that made a lot of difference. We saw how each other performed and put things together, and we’ve kind of picked up bits and pieces off of each other.

Can we expect any sibling rivalry, or do you both get along pretty well?

Jack: A little bit, but we get along for the most part pretty well. A lot better than we used to growing up as siblings!

Dawn: Yeah, we grew out of a lot of that competitiveness, but we still get the jab in every once in a while, as siblings do. It was awesome to be able to spend that much time with him, where we were right next to each other for long periods of time. And we still talk to each other. So that’s good.

Dawn: I started the ball rolling when I saw the first episode of Season 1. I was looking at our sister Denise and thinking to myself, ‘I should do this, this would be great!’ When the audition process came up again, our sister wasn’t able to join me in the process this time around. So when I [entered my details], they’re like, well, who else could you do it with?

So I got Jack on board and introduced him to LEGO MASTERS, which he really hadn’t seen until I said something to him. So this was all new to him. Not that he hasn’t done it – I knew he had the creativity that would help pull everything together.

Jack: It conflicted with something else that I had going on in my life. So I never got to actually visually see the show. until right before we’re getting ready to finalise the deal and go to Atlanta and I kind of binge-watched it and and I was in awe. And, yeah, it’s her fault.

Dawn: I’ll take the blame. That’s okay. Or the credit, whichever you want. But yeah, I started with that, and it just was one of those things – the worst they can say is no. And every step, we got to the next step. And then we got tickets to go to Atlanta, that was just crazy. It was amazing. They treated us very well at every step of the way.

Jack: It was the opportunity of a lifetime. The people that we met are just amazing. And what amazed me the most I think, was there wasn’t this friction you have with competition. It was more like a love, and everybody wanted to help everybody improve their skills. It was just an amazing experience. And all my years I can’t imagine ever getting the experience.

It didn’t even register when we were there. One of the producers was asking us, how does it feel to be on LEGO MASTERS? And it didn’t even register. It just went right over our heads. And he had to ask again, because we didn’t give him the response he was looking for. It was amazing, though, it was phenomenal.