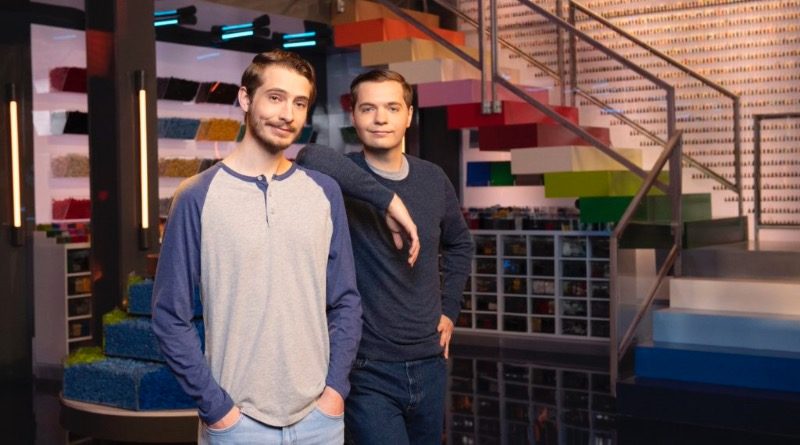 Brothers Mark and Steven discuss the pressure of building on set for LEGO MASTERS USA Season 2.

We’re just days away from LEGO MASTERS USA’s return to screens for Season 2, with Will Arnett back on hosting duties and Jamie Berard and Amy Corbett in the judging seats. As we prepare to see all 12 pairs of contestants compete for the $100,000 cash prize, we’ve been chatting to siblings Mark and Steven about their experience in the Build Room.

Mark: I think the true superpower of us is that we’re both independently very strong builders, but both in very unique ways. I’m a big picture, large-scale builder and Steven is the details, the finetuning one.

What was your main takeaway from being on LEGO MASTERS?

Mark: I was super impressed and inspired by everyone’s unique perspective, because there’s a lot of different builders. You have a pattern of how you do things, [and] everyone was so different. It’s just mind-blowing.

Steven: Yeah, it was all the difference in how people approach each challenge. And how everyone navigated through the difficulties and all the hoops that we have to jump through to accomplish them. That was something that will stay with me forever.

Mark: We were actually approached for Season 1. We actually did at least one interview, but it ended up we had to cut the whole process short, because I was still doing school and Steven just got a new job. So it didn’t work out. We were like, ‘Keep us in mind if you do a second season,’ and the second season came around.

We were interviewed fairly early in the process and we just got in the door and rolled from there. We both have a pretty extensive portfolio of builds online and I think that got their attention.

What was the biggest difference between building on set and building at home?

Mark: Well, for one thing you have half a dozen giant cameras right in front of you. It’s certainly different. There’s a lot more pressure – you have a big timer hanging over your head throughout the entire time. You go from work speed to ludicrous speed; you’re going really fast and you’re not used to that. So everything is heightened like crazy. That’s the biggest difference.

Steven: For me, it would be not knowing where all the pieces are. We’re very familiar with our own collection; we know where everything is. And so when you’re going into a completely new environment, it’s like, ‘Where are the turntables?’ They had ways to help us find things, but there’s still this rushing. So the learning curve of that was a big challenge for me.

Steven: We did a little bit of a refresher on some basic math for different sphere sizes and watched some episodes from Season 1. We also played out a couple of big picture ideas – like, if we’re faced with this, we might do a dragon or something. There’s different categories of things we can be like, ‘Okay, for this challenge, we could pull out this item.’ We just had a few little plans hovering around in our heads, but nothing really set in stone specifically.

Mark: We were really going in there feeling flexible and free. We didn’t really lock ourselves down to anything specific, but we did have a few little vague ideas running around in our heads.