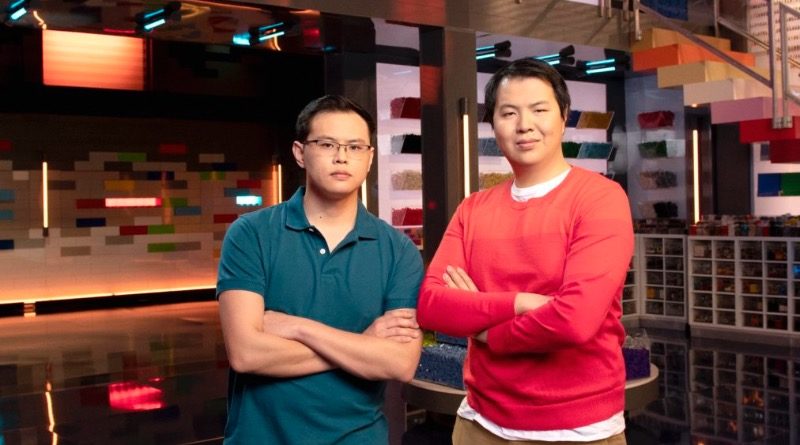 Brothers Zack and Wayne reveal how they used their individual strengths to work together as a team on LEGO MASTERS USA Season 2.

The second season of LEGO MASTERS USA is right around the corner, and we’ve been catching up with all 24 contestants – including brothers Zack and Wayne – before we see them on TV screens competing for the $100,000 cash prize and the title of LEGO MASTERS. Let’s hear how these siblings approached the Build Room…

Wayne: It’s kind of simple, but our biggest thing is that whenever we have a very clear idea, we have a tendency of executing it really fast.

Zack: Yeah. At least that’s the way people talk to us. The compliment you get is, ‘You build really fast.’

Wayne: I wish I had the ability to instantly memorise where all the parts were. Because if I knew where everything is, I’d cut down half of the time, because there’s the time getting the piece [and] knowing where the heck it is. So it’d be nice if I had some sort of eidetic memory. That would be very handy for this.

What were the differences between building at home and building on set?

Wayne: Building on the show, the equation becomes detail, answering the requirements and time. You can pick two out of those three things. You very rarely are able to get three, but there are some pretty good people on the show who could do all of that. [And] you can really push your limits, because the brick pit has a lot of bricks. This show definitely inspires you to build bigger.

Zack: It’s always, ‘Am I gonna be able to build bigger this time?’

Wayne: That’s the thing about LEGO MASTERS. It changes what people perceive LEGO to be.

What was your biggest takeaway from building together as a team?

Wayne: I can sum up our relationship as: I am pure willpower – I have all the edge to make it happen – but this is the guy who actually knows how to make it possible. So I can definitely say our biggest takeaway from the show was that we worked surprisingly well together.

Zack: What we did definitely prepare on was communication. That’s definitely a hard thing to master in the teamworking environment. You want to be able to help each other, but there’s no real way you can strategise or prepare for everything. But we did memorise a couple of things like building spheres and certain building techniques.

Did you end up butting heads on the show as brothers?

Zack: For me, during the competition, you don’t want to butt heads. It’s like we are in game mode. We don’t want anything in the way. But we do argue.

Wayne: The way we interact, arguing and bantering is actually part of it, right? It’s one of those things where I understand that Zack is right, but just because he’s right doesn’t mean that I’m wrong. It’s like we can both agree that we’re both right.

I laugh a lot, I should warn you. I’m pretty sure they had to invent a ‘shut up button’ for me at some point. But I really feel like LEGO MASTERS gave us a way to really show off our brotherly bond. Because that’s the thing: [you have to] trust your partner at the end of the day. That’s what has to happen. The only way you’ll go anywhere in this competition is to trust your partner.