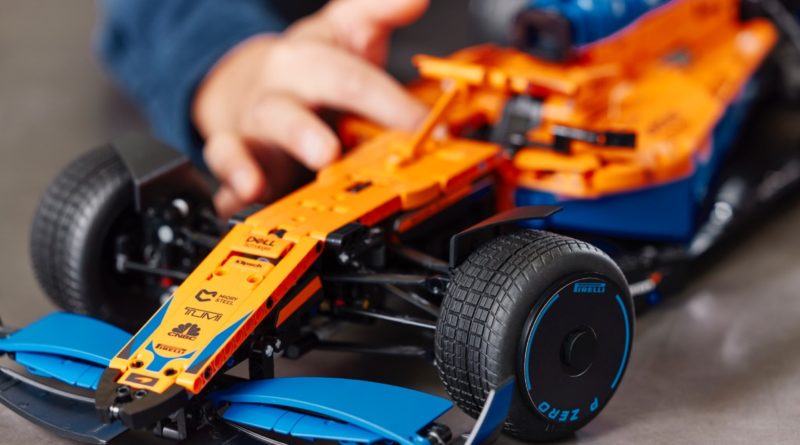 Check out more images of the newly-revealed LEGO Technic 42141 McLaren Formula 1 Race Car, which is a ‘hands-on interpretation’ of McLaren’s 2022 F1 car.

“We are excited to unveil the unique LEGO Technic model of our McLaren F1 car, a fun and engaging product that celebrates our 2021 season livery while giving fans a hands-on interpretation of the new 2022 F1 car design,” said McLaren Racing’s Executive Director James Key.

“This has been made possible by an agile collaboration with [the] LEGO Group’s team, who have truly embraced the spirit of our brave and bold approach to design. The final product looks fantastic, and we cannot wait to make this available to our fans.”

“The partnership between the LEGO Group and McLaren continuously develops each time we get together for the next collaboration,” added LEGO Technic Head of Product Niels Henrik Horsted. “We never stop trying to excite and inspire our fans by pushing the limits of possibility through the technology and designs produced, both on the racetrack and with LEGO building.”

The press release for the new set asserts that this is ‘the first LEGO Technic incarnation of a Formula 1 car’, but that’s only true from a certain point of view. We’ve had plenty of non-licensed Formula 1 cars under the Technic banner, and while 2002’s 8461 Williams F1 Team Racer is technically a Racers set, it’s comprised almost entirely of Technic elements.

It might therefore be more accurate to say that 42141 McLaren Formula 1 Race Car is the first licensed Formula 1 car specifically labelled as a Technic set, but that’s probably a bit wordy for a press release. Either way, you’ll be able to pick it up from March 1. Our review will be published later this month.